Labor Day is here signaling the traditional end to summer, but more importantly, it is a day to honor America’s workers.

Over the last 18 months the coronavirus has taught us that the people who are most important to us for our survival, are also some of the lowest-paid workers:

The home health aide who went to your elderly aunt’s house every day during the pandemic, her median wage, $13.35 an hour. The cashier at the grocery store or convenience store, who made sure the store was open so you could buy milk for your kids, median wage, $11.53 an hour. The fast-food worker who handed you your coffee or lunch through the drive-up window, median wage $10.83.

To put this in context, the minimum wage in Massachusetts is $13.50 an hour. The National Low Income Housing Coalition reports that in order to afford a 2-bedroom apartment in Manchester without spending more than ⅓ of your income, you would need to earn an hourly wage of $26.15. In short, the people who kept us alive over the course of the pandemic can’t afford to both keep a roof over their head and feed their family without help, nevermind paying for medical bills or fixing a broken car. 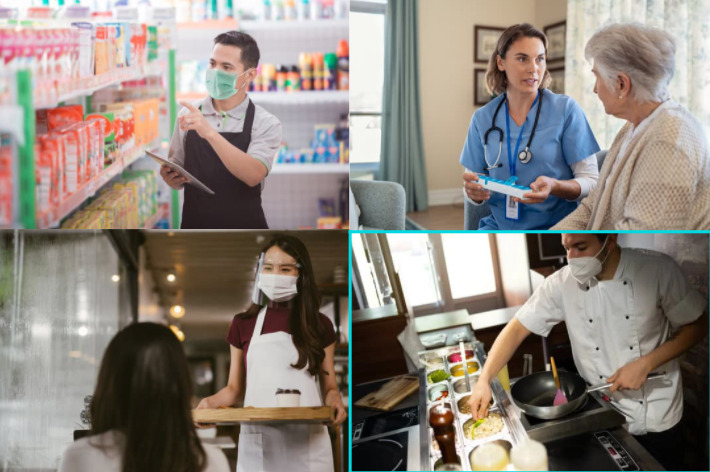 When things were at their worst there were a lot of TV ads and Facebook memes praising these “essential workers.” But let’s face it, talk is cheap. In addition to our respect, what these workers really deserve is a living wage.

I often hear people say that these workers should just go out and get better jobs. Well, the pandemic has given a lot of low-wage workers the opportunity to re-think their commitment to these jobs. Now, the very same people who were exhorting folks to “get better jobs” are in high dudgeon because they took their advice. Now, who will help Aunt Muriel get out of bed and make sure she eats something?

Some people say that the minimum wage was never meant to be a living wage but here is what President Franklin Roosevelt said when he introduced the minimum wage in 1933. “In my inaugural, I laid down the simple proposition that nobody is going to starve in this country. It seems to me to be equally plain that no business which depends for existence on paying less than living wages to its workers has any right to continue in this country.”

In New Hampshire, an estimated 166,000 workers would get a raise if the Raise the Wage Act passes. Thousands of children will be lifted out of poverty and millions of dollars will pour into the economy as these workers will finally be able to both pay rent and buy food or new shoes for their kids.

So on this Labor Day let’s commit to really doing something for our essential workers. Let’s guarantee them a wage that allows them to live with dignity and free from the stress of living in poverty or near poverty. It is the least we can do.

Both Congressman Pappas and Congresswoman Kuster voted in favor of the Raise the Wage Act. Now it is up to Senator Hassan and Senator Shaheen to do whatever it takes to pass it through the Senate. New Hampshire workers are counting on them.