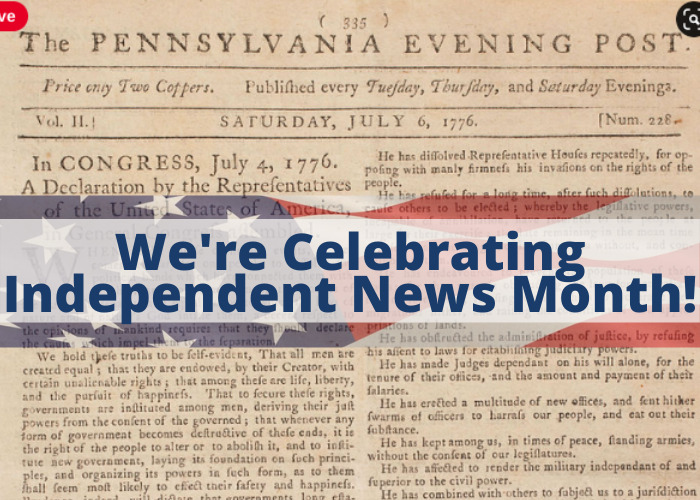 MANCHESTER, NH – It’s Independence Day, and for me, that is a day that is deeply rooted in my humble Philly beginnings. I was born there, as was my father, in 1925, the first-generation American of his German immigrant family, who came here to build a better life for themselves and, inevitably, for me.

The Declaration of Independence was also born in Philadelphia and was first published in a newspaper on July 6, 1776. The document was approved on July 4 (the Continental Congress actually voted for it on July 2, so I guess it’s fateful that we’ve evolved into a people who know how to stretch a national holiday into a four-day barbecue celebration).

John Dunlap was the publisher, an Ireland-born immigrant who took over his uncle’s print shop after being an apprentice from the age of 10 when he arrived from the Emerald Isle. By July 18, 1776,  the Declaration of Independence had been distributed to all the colonies and published in 24 newspapers.

I tell you this because this document is the foundation of our country and its publication and circulation is how we, the people, understood that we were a free people – free from the tyranny of a form of governance that was despotic and did not function of the people, by the people, for the people.

When I became an independent news publisher in 2014 my goal was to build something that served the people of my community in a meaningful way. I wanted to build a site that reflected our city and our state in such a way that we could appreciate all that is good and understand all that could be better. I also believe that if people are going to have the information they need to function in a community, they should have free access to that information – particularly in an “information age” that is fraught with misinformation and clouded by personal and political bias.

I didn’t do it alone. I had the support of LION (Local Independent Online News) Publishers and so many others from our community at every step of the way, people who see the same promise in our community that I do.

I am gratified to still be in the news publishing business. It has not been easy, or cheap. I have invested much of my own money as a start-up to build something with wings strong enough to fly on its own. And although we have lift-off, I know we can soar much higher.

With apologies to Bette Midler, today I am about to ask you to be the wind beneath our wings.

Below is a copy of the original Declaration of Independence as published by John Dunlap in the Pennsylvania Evening Post, our nation’s first daily newspaper. Dunlap could not have imagined that 245 years later newspapers would be incidental to the electronic delivery of information.

But I imagine it was his hope – and that of the Founding Fathers – that the vision they had for the establishment of a government led by the people in which it was understood and acknowledged “that all men are created equal, that they are endowed by their Creator with certain unalienable Rights, that among these are Life, Liberty and the pursuit of Happiness,” would not only endure, but continue to correct itself along the way.

I’ve declared July “Independent News Month,” and in that spirit we will soon be unveiling some site improvements that we hope will enrich and improve your lives as our loyal readers. In the past year we have pushed ahead, full throttle, producing more news than we ever have before, fielding more story ideas from our readers, and pursuing solutions-based journalism whenever possible. We’ve enlisted the help of more journalists, and we’ve assembled an advisory team to strategize ways to step up our game and deliver to readers more of what they want and need to be informed and connected – especially in such a time of uncertainty as we’ve all just endured.

And it’s not over yet.

Although there are costs involved in the production of news, we believe that there are ways to keep delivering the news to you without a paywall or up-front costs for the benefit of all.

If you are so inclined, we would love you to go deeper with us by supporting the Ink Link in one of five ways:

Here we are, you and I, communicating about freedom and independence, democracy and the pursuit of happiness on the 4th of July. This was the hope of my grandparents, who sacrificed so much in order that I might be able to be a publisher, a creator and a woman who not only has a voice, but helps amplify the voices of others.

I thank you in advance for reading, for coming back, and for celebrating independence each and every day that you choose the Ink Link as your preferred news source.

Below: How we the people learned about the formation of the United States of America.