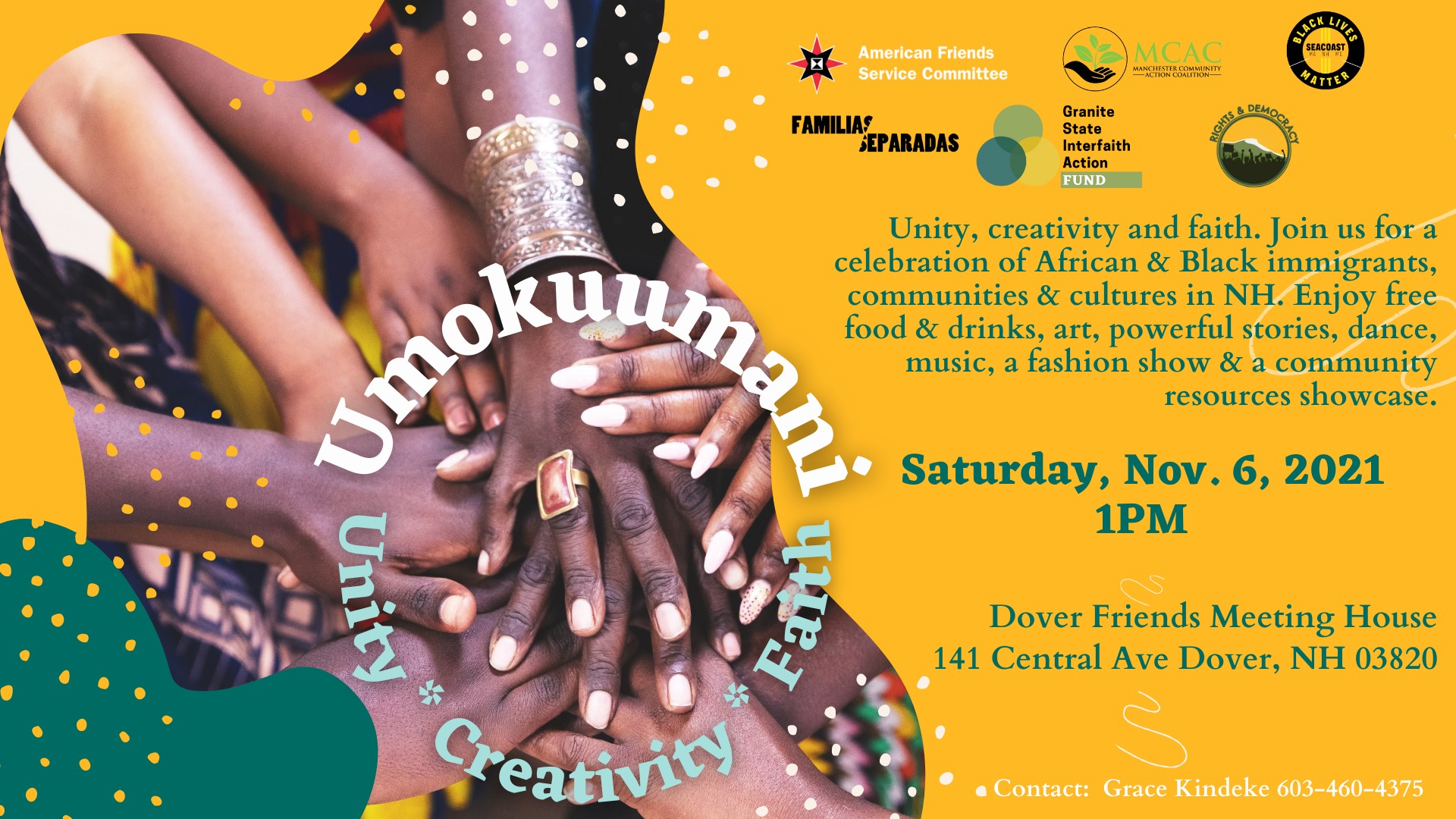 DOVER, NH – A community celebration called Umokuumani: Unity, Creativity and Faith. A Celebration of African and Black immigrant communities in New Hampshire, is planned for Saturday, November 6 from 1  to 4 p.m. at the Dover Friends Meetinghouse, 141 Central Avenue, in  Dover.

The event, which marks the closure of a national public art exhibit highlighting stories of asylum seekers in New Hampshire, will feature a dance performance, fashion show, and showcase of community resources and immigration information, as well as music, food and drink. The event is free and open to the public.

“Utilizing a combination of three Swahili words – Umoja meaning  unity, Kuumba meaning creativity, and Imani meaning faith – we formed a new word – Umokuumani – to represent three  principles that many Black and African communities rely on to navigate a new country while staying connected to families back home.”

“The purpose of the event is to uplift the experiences and stories of Black and African immigrants who contribute so much to New Hampshire,” said Kindeke, who arrived to Manchester from the Democratic Republic of Congo at the age of 2.

Dover Friends Meetinghouse, a house of worship for local Quakers and a sanctuary congregation for immigrants facing the threat of detention and deportation, installed the Familias Separadas public art installation in June 2021. The exhibit’s two large banners feature the stories of African immigrants, Mark and G, Seacoast residents seeking asylum in the U.S.

G – G is an African immigrant who was detained at the border between Mexico and the United States. He describes his journey, not knowing where he was or how to communicate. He speaks to the challenges of learning Spanish and English and the bonds forged in spite of language barriers.  More on G’s story here.

Mark – Mark is an African immigrant who was detained for two years in the United States. He was targeted in his home country due to his participation in peaceful protests demanding positive change in his community. He speaks to the challenges of when he was incarcerated and the impact it has had on his family.  More on Mark’s story here.

“In New Hampshire and throughout the U.S., Black immigrants are vital members of the community, contributing to the diverse fabric of a steadily diversifying state. These stories are often left out of the narratives about immigration and the advocacy for immigrant rights,” Kindeke said, noting that 3.8 million Black immigrants live in the United States.  “Many have fled harsh conditions in Africa, the Caribbean, and elsewhere and seek asylum in the U.S. Upon arrival, they  are forced into U.S. detention centers and must make their cases without benefit of legal representation or guarantees of due process.”

Kindeke added that this event comes at a critical time.

“Congress continues negotiations to include a pathway to citizenship as part of the Build Back Better package. We are the closest we have been in 35 years to passing critical protections to bring relief to millions of undocumented immigrants, including 619,000 Black immigrants,” Kindeke said.

From Mark, whose story is featured in the exhibit:

“The importance of this celebration is to advocate against violence towards Black immigrants who are undocumented and to develop a deeper understanding of the systemic barriers that  prevent Black people from realizing equal opportunity in the United States. It is important to showcase how members of  the Black community work to contribute to the growth of the larger community, and for the broader community to be  continuously self-reflective about their own privilege and power. This event is also an opportunity to focus on the unique  challenges faced by Black immigrants who sit at the intersections of overlapping systems of discrimination.”

As a member of the celebration planning team, Mark explained the group’s purpose.

“We push for the recognition of the voices of those most directly impacted because they are frequently excluded from mainstream conversations. We seek to amplify, promote, and support the voices and storytelling of those most affected by policies and practices that block real, lasting, and equitable change. We hope to build community and encourage alliances and coalitions so that together we can achieve equal opportunity and social justice,”  he said.

From Christine Kindeke, a community member from the Democratic Republic of Congo and member of the planning team, “African and Black Immigrants in New Hampshire, friends and supporters feel the urgent need to come together around this event to proudly share our stories of resilience, of hope against all odds, of unshakable faith, of overcomers and survival. To plant the seed of brotherhood and sisterhood rooted in African solidarity. To give a voice and a face to the  African and Black immigrant communities which are too often invisible and unrepresented in New Hampshire. We hope to share the contributions, skills, integrity and wisdom of these hardworking communities to shine before men and give  glory to our Creator.“

From Lidia Yen, Lead Organizer for Change for Concord and member of the planning committee: “New Hampshire is still a majority white state, but there is a vibrant community of Black immigrants and refugees here. So much has happened in the last few years as we continue to push for humane immigration policy, recover from the pandemic and respond to our communities’ needs. This is an important time to uplift Black and African people and show that New Hampshire can  be a diverse and welcoming place.”

From Clifton West, Co-founder and Executive Director for Black Lives Matter Seacoast and member of the planning committee: “Black and African immigrants are valuable community members but unfortunately their voices, experiences, and culture do not get highlighted. This event is meant to uplift and bring together people from many different backgrounds in a beautiful way. We hope that this event inspires a new sense caring and appreciation towards the  experiences of our fellow Black and African immigrants and also an understanding that we as a community are here to  support them through their journeys and help them in any way possible.”

From Asma Elhuni, a community member from Libya and the Movement Politics Director for Rights and Democracy NH: “It is important that people include African voices and stories because oftentimes our stories get left out even though our journeys and experiences matter. Africans not only live in New Hampshire, we enrich it and are a vital part of the fabric here. It is important that we honor New Hamsphire’s African community members. I hope you will join us as we  celebrate human diversity, honor our African and Black communities and stand in solidarity with them by demanding  that Congress pass a pathway to citizenship this year.”

Dover Friends Meeting – Gathered in 1662, Dover Friends Meeting is the second oldest congregation in Dover. The  Society of Friends, or Quakers, emerged during the religious, social, economic, and political upheavals of the mid-1600s  in England. The spiritual practice of Friends takes place in silent meditation with occasional sharing of messages ‘as the  Spirit moves.’ The name ‘Friends’ comes from John 15:14–15, where Jesus says, “I have called you friends.” In the early  days, Quakers were also known as Children of Light or Seekers After Truth.

Familias Separadas – In response to the rise of deportations in 2013, the “Familias Separadas” (Separated Families)  project was created by artist Michelle Angela Ortiz. The project focuses on the stories of families living in the United  States and how they have been impacted by detention and deportations. The main goal of the project is to create moments of healing and to shift the focus from statistics/numbers of deportations to seeing the father, mother, brother that has been torn apart from their families. Phase 3 of the Familias Separadas project focuses on immigrant experiences at detention centers in Colorado, North Carolina and New Hampshire. The art installations highlight the fact that our unjust immigration policies do not begin at the border, they spread throughout our nation.

Granite State Interfaith Action Fund – The Granite State Interfaith Action Fund (GSIAF) envisions a state where everyone, regardless of immigration status, has adequate food, access to safe and affordable housing, decent healthcare, a quality education and a living wage to work with dignity. Comprised of people of faith who unite to strengthen a collective voice. GSIAF strives to empower neighbors to engage in the democratic process and advocates on their behalf to build a more just society. Through education and activism, members work to ensure that all voters have access to the information they need to vote their values and hold elected officials accountable. Additionally, members seek to center the needs of voters of color, working-class voters and people of faith.

Rights & Democracy NH – Rights & Democracy New Hampshire was formed to build a movement across the region to counter the influence of money in politics and to hold elected officials accountable to upholding people’s rights and democracy. RAD works to create change through grassroots organizing, educating and mobilizing around the issues that affect NH communities, recruiting and training candidates to run for office, and working through the political and electoral process to advance progressive policies that lead to happy, healthy, and just communities for everyone.