Story Produced by NH PBS, a Member of

Content below has been edited for length and clarity. Watch the full program above.

CONCORD, NH – It’s been one year since the COVID-19 pandemic changed life as we know it. Along with many others, New Hampshire journalists have been on the frontlines covering COVID. This week, The State We’re In host Melanie Plenda speaks with Carol Robidoux, founder and publisher of the Manchester Ink Link, Jack Rooney, education reporter at the Keene Sentinel, Teddy Rosenbluth, health reporter at the Concord Monitor, and Bob Sanders at New Hampshire Business Review about the unprecedented year that passed and the stories we’ll likely cover in the year ahead.

Melanie Plenda: Teddy, let’s start with you. When you began your Report for America assignment with the Concord Monitor, you jumped right into COVID coverage. The stories you highlighted for us were heavily focused on the impact of COVID-19 on people. Tell us, what’s impressed you most about the impact you’ve seen this virus make on people’s personal lives?

Teddy Rosenbluth: Some of the stories that have stuck with me the most are the stories that look into the emotional toll that the pandemic has taken on frontline workers, specifically at nursing homes. I followed some nurses at the Hillsborough County nursing home – which had one of the most deadly outbreaks in the spring – and they talked about just trembling as they put on their gowns to go into the COVID ward, and caring for people who they had been with and known for tens of years just to watch them die from truly a ruthless virus.

Melanie Plenda: What do you think surprised you the most in your coverage of health over the last year?

Teddy Rosenbluth: How far-reaching this virus is; for COVID testing, I reached out to universities, hospitals, and nursing homes. It feels like I’ve covered every part of New Hampshire just by, by covering the pandemic. 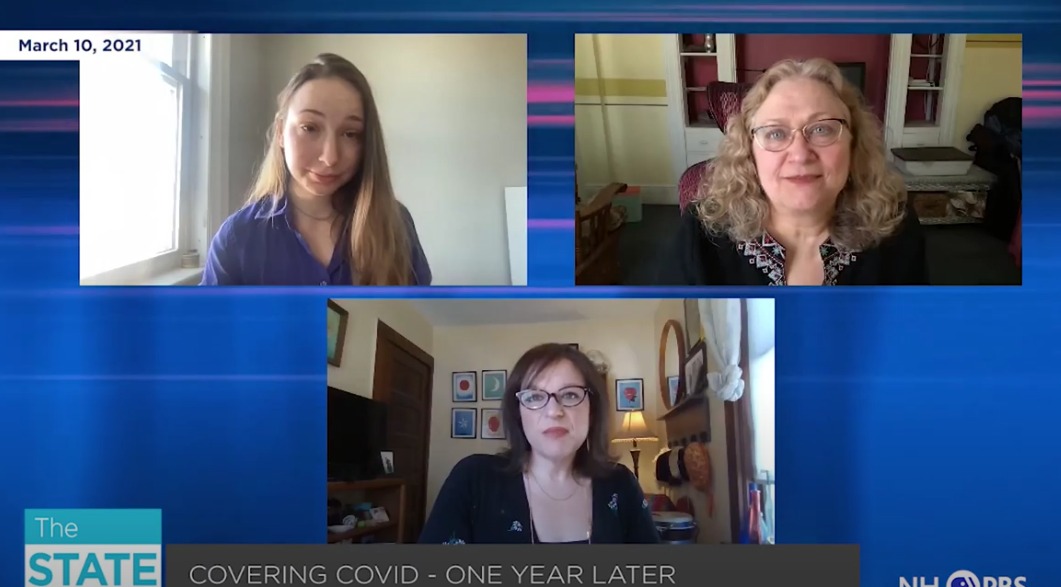 Melanie Plenda: Carol, let’s turn to you. What was the biggest challenge for you running a small business like Manchester Ink Link and covering COVID in your community?

Carol Robidoux: From the onset a year ago, we had no idea how long it was going to be an issue, how great the changes were going to be about how everything functioned – not just businesses like ours or businesses in general – and people’s everyday lives. The more things changed or the new normal became apparent, we had to figure out how to tell stories in a different way, perhaps working collaboratively with other news outlets and trying to find people where they were, which was mostly online. It was hard to find actual people to talk to sometimes. People wanted information and updates on what’s next? How can we protect ourselves, like that initial push for practical medical safety information was huge. I think traffic to our website tripled immediately because people were thirsting for that information, and the health department was learning in real-time. Those updates were not easy to get; they came as we got them. Then we had conflicting information coming from the White House at times, which created naysayers about it, and then you had to weed through all of that.

Melanie Plenda: Looking back on it now, what in your view was the most important story from Manchester that you covered last year?

Carol Robidoux: I think what happened was that COVID sort of peeled back the curtain on the state’s existing homeless issue, which became amplified by COVID, starting with an exodus from the state’s largest homeless shelter here in Manchester. New Horizons people left the shelter en mass because they were worried about being that close with other people and they didn’t feel safe. As a result, we saw an explosion of outdoor encampments here in Manchester – and I know they were in surrounding communities as well. At one point federal money was used to support the largest encampment – which had maybe 40 tents or more – with food deliveries twice daily, with police protection, with bathroom facilities, and running water. That lasted for about eight weeks.

That was controversial for some people, and it was following CDC guidelines not to move people once they’d found a place to be, especially the unhoused population, but we had over 30 or 40 encampments all around the city – and we still do actually have probably 30 plus. Out of that at some point came the addition of an encampment right out on the lawn of the Hillsborough County Superior Court North, which became another sub-issue in and of itself and a sort of a battle between the city and the state in terms of how to address that.

Melanie Plenda: Turning now to Bob Sanders of New Hampshire Business Review. Bob, you followed the economic impact of COVID-19 very closely in the Granite State. What surprised you as you were covering the pandemic this year?

Bob Sanders: What surprised me the most and still surprises me to this day is how some things are not nearly as bad as you would expect. In fact, things have gotten better in some parts of the economy and I’m just amazed. We had unemployment up to 17%, the whole economy was shut down for months and yet real estate sales are going through the roof. Bankruptcies are at an all time low, our unemployment now is at 3.6%, the government is getting 150% more in business taxes this February from last February – last February, if you remember, there was no pandemic, so I’m just amazed at this.

Melanie Plenda: Let’s pivot now and talk about how Granite State families have been faring, particularly in their school systems. Jack, can you bring us up to speed on the process schools have taken to get to the hybrid model that they’re at?

Jack Rooney: About a year ago now schools throughout the state and throughout the country really had to pivot on a dime as the pandemic hit the United States and forced closures, sending us into remote work and remote school. At the governor’s order, schools in New Hampshire finished the last school year fully remotely, but then over the summer you saw both a statewide and a district wide process to really develop their own individual reopening plans. The state guidance over the summer really left a lot of room for local school districts to develop their own reopening plans and, generally speaking throughout the Monadnock region, the most popular choice for school boards and school districts has been some sort of a hybrid model.

For instance, probably the most common one here in Southwestern New Hampshire involves having kids in school for in-person classes two days a week; they’re split into two groups and they alternate which days they are in school,and then there’s normally one day a week where everyone is fully remote. There was a period, especially over the holidays, where nearly all local school districts switched to fully remote learning, either due to the number of COVID-19 cases they were seeing within the school communities or the overall community spread throughout the state. Cheshire County hit certain levels that were laid out in these decision-making matrices that schools built into their reopening plans – if cases hit a certain level, schools would automatically tip into a remote learning environment. Most schools here, with the exception of one local district, switched to fully remote generally speaking from right after Thanksgiving until early to mid January. Since then, we’ve kind of seen a corresponding decrease in COVID-19 cases after the holidays, and after that big winter spike schools have been returning to their hybrid models. Now you’re really starting to see schools looking ahead to getting students back to in-person classes even more, some are certainly discussing that possibility by the end of this current school year.

Melanie Plenda: What are you watching out for in your reporting over the next couple of months?

Jack Rooney: First and foremost is really the nuts and bolts of how and when are schools going to more fully reopen and get back to normal, more or less. I think the conventional wisdom at the moment is that schools by September should be able to more or less be fully reopened, but there is some discussion already that students and staff will probably still be wearing masks in the fall. Depending on how fast teacher vaccinations continue, you’ll still have people in schools wearing masks, but it seems like a lot of school officials and school board members I’m talking to and listening to are optimistic that the students can be in school more often if not by the end of this year, then certainly by the beginning of next school year – even if some of those COVID-19 protocols remain in place.

Honestly, in the next several years to come, schools are going to be dealing with the toll that the pandemic has taken both on students and staff members; a lot of students have struggled with remote learning though at the same time a lot have, have done well with the altered environment. I think schools are going to be looking at what worked well with remote and hybrid learning, and how we can continue to incorporate some of that into our curriculum moving forward. At the same time, there are educational, social, and emotional losses that come with kids not being in school, so you’re already seeing schools start to discuss and implement plans to really measure how much academic and social and emotional loss children and staff members experienced during the pandemic, and start to build up and implement supports to help them address those issues in the years ahead.

The Granite State News Collaborative is a statewide multimedia news collaborative that draws on and amplifies the strengths of its members to expand and add missing dimensions to coverage of issues of concern to the NH public as a whole, as well as to particular communities. Through coordinated reporting and engagement activities, the Collaborative will pursue inclusive and responsive coverage that builds public trust and holds government accountable to its citizens.