In a 166-160 vote, the House included funding for the project development phase of the rail expansion project in the state’s Ten Year Transportation Improvement Plan, known as House Bill 2018. The proposed Capitol Corridor Rail Expansion Project would extend passenger rail from Boston, Mass. to Manchester, NH with two stops in Nashua, a stop at the Manchester-Boston Regional Airport and a stop in downtown Manchester. The New Hampshire Senate will now consider the amended Ten Year Transportation Improvement Plan. 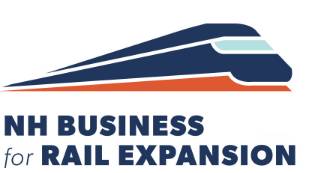 “We are extremely pleased members of the New Hampshire House of Representatives listened to the voices of more than 100 statewide businesses and 74-percent of Granite Staters by supporting an amendment to House Bill 2018, which will designate federal funding to undertake an in-depth analysis of passenger rail expansion from Boston to Manchester,” said NH Business for Rail Expansion spokesman E.J. Powers. “This vote sends a positive message to businesses that New Hampshire is committed to attracting and retaining young talent, bolstering our economy and addressing the significant workforce challenges facing our state. We look forward to working with members of the Senate and Governor Sununu to ensure continued bipartisan support for this vital effort.”

NH Business for Rail Expansion, a statewide, nonpartisan business coalition that launched in January, consists of more than 100 businesses from across the state. In addition to business support, nearly 200 individuals have signed a petition in support of rail expansion.

Governor Sununu and the Governor’s Advisory Commission on Intermodal Transportation (GACIT), which is comprised of the members of the New Hampshire Executive Council, included the $4 million for Project Development in the state’s Ten Year Transportation Improvement Plan. The $4 million would be covered entirely through federal grants, and would provide a detailed analysis of engineering, environmental, and geotechnical aspects, along with a firm financial plan for expanding passenger rail from Boston to Manchester.

The NH Capitol Corridor Study, which was released in 2015, detailed the benefits of rail expansion. The expansion of rail to New Hampshire would welcome 668,000 weekday riders and deliver the following economic benefits:

For more information and to sign the petition, please visit www.NHBiz4Rail.com.