The end of May is here and the month of June is upon us, arguably THE best fishing month of the year. It’s the time when stream anglers see the high flows of spring recede and insect hatches begin to flourish. Most lakes have gone through their spring “turnover” by now and are starting to set up thermoclines for the summer season, yet we haven’t reached the “dog days” where fishing tends to get tough.
Fishing for spring bass, while being catch-and-release season until the middle of June, can be phenomenal some days. Oh, and don’t forget about Free Fishing Day on June 3. It’s a great way to introduce a non-fishing friend or relative to the sport we all love! Trout stocking continues, primarily up north, but check the stocking report to see where we’ve stocked trout the previous week. Don’t forget to send me your reports and photos by dropping me a line at scott.decker@wildlife.nh.gov.

In the North Country, fisheries biologist Andy Schafermeyer reported the pike fishing in Moore Reservoir has been more productive than usual. The fish have been hanging around in the shallows longer, as temperatures have remained somewhat cool. Throwing lipless crankbaits (e.g., “Rattletraps”) has been working well for the pike and often fish are seen before the strikes occur.

Andy noted that they were getting a number of smallmouth bass when fishing for the pike. Andy and his son had some good luck for brook trout on the Upper Ammonoosuc River in Groveton recently. Fishing the tailwater below the Weston Dam with big spoons produced multiple hook-ups. He suggested that fishing the tailwaters below most of the dams in the region is a good bet for success. Up in Pittsburg, Lake Francis was producing some fine brown trout and water temperatures were still in the 50s, so fish were still near the surface.

In the Lakes Region, panfish is “primetime” (bluegill, crappies, sunfish) in the lakes and ponds, as they are in pre-spawn mode and in the shallows searching for nest sites. Small jigs or spinners tipped with worms will do the trick. Bass are on nests now, so catch-and-release is in effect through June 15. Landlocked salmon can be in “transition mode” and can be found pretty much anywhere, depending on time of day. Try fishing shallow early and late, as the fish may be taking midges from the surface. If it is a bright sunny day, fishing 3 to 5 colors of lead core with small spoons can be productive, especially with a little orange or copper color.
The biologists suggest several trout ponds should still be producing well with the extended cool temperatures such as Russell Pond in Woodstock and Echo or Profile Lake in Franconia Notch. We have received reports of several anglers having good luck with broodstock Atlantic salmon in the area of the Winnipesaukee and Pemigewasset River junction in Franklin. Wooly buggers and other streamers were producing for some of the fly anglers there.

In the Keene/Monadnock Region, I received a report from an angler having good results catching brook trout in Stone Pond in Marlow. Trout powerbait was the ticket to success. Randy over at Morse Sporting Goods in Hillsboro noted he was getting very good reports on people catching brookies and rainbows in the Contoocook River with both fly and spinning gear. Water temps are rising quick and bass fishing is starting to heat up as well. A few people are having luck hornpout fishing in the various warmwater ponds which is popular in this area. I will add that I fished Powder Mill Pond in Bennington last week and had a hard time keeping pickerel from stealing my lures. Voracious strikes from the “toothy torpedos” and 4-lb test line do not mix!

On the Seacoast, marine biologist Becky Heuss says stripers are showing up in numbers finally. She reports lots of 12- to 27-inch fish in Hampton Harbor and toward the mouth of the harbor, as well as Little Harbor and the back channel by Sagamore Creek. Fly fishermen are doing well in the back channel. Cut mackerel and live macks are getting them in the harbors. Mackerel are around outside of the harbors as well.
Headboat companies are catching a lot of these on the half-day trips. Stripers are also being caught in the Cocheco and the Lamprey Rivers. Becky spoke with someone who caught a 28″ striper at Henry Law Park in Dover recently. There are also reports of many river herring making their way up the Exeter River through the old dam site in town. A few “salter” brown trout were showing up in Berry Brook down in Rye recently. We heard that a 24-inch 5-pounder had been caught!
Federal Aid in Wildlife and Sport Fish Restoration: A User-Pay, User-Benefit Program
Researching and managing fisheries and teaching people about aquatic ecosystems are funded by your license dollars and by the Federal Aid in Wildlife and Sport Fish Restoration Program. Your purchases of fishing equipment and motorboat fuels make a difference to New Hampshire’s fisheries. Learn more. 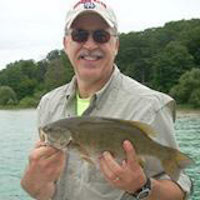 NH Fishing Report is brought to you by Scott Decker, program supervisor for NH Fish and Game Department’s Inland Fisheries Division. Send him your local fishing updates and photos at scott.decker@wildlife.nh.gov.