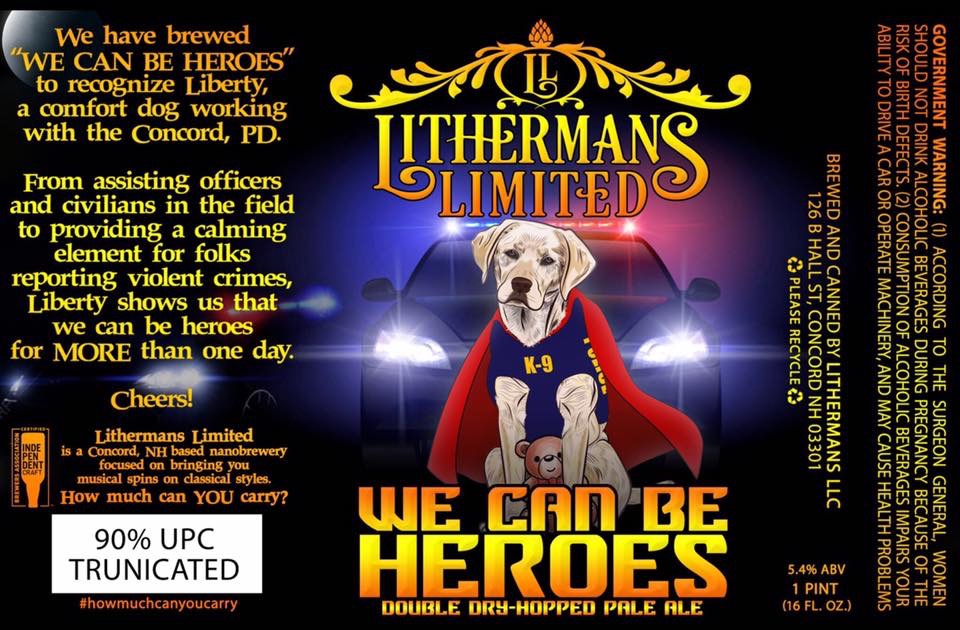 CONCORD, NH – Lithermans Limited Brewery in Concord is hosting a fundraiser Sept. 20 for the Friends of the Concord Police K9 Program with its newest beer “We Can Be Heroes” double dry-hopped pale ale. An artist’s rendering of the Concord Police Comfort K9 Liberty will be featured on the beer label wearing a red cape in front of a police cruiser.

Lithermans co-owner Michael Hauptly-Pierce said he had long wanted to do an event connected to Hero Pups, the dog training organization that prepares comfort K9s like Liberty for service, but the opportunity came about four or five months ago when he began talking about the idea to support Liberty with Sue O’Donnell of The Hotel Concord and community marketing strategist Kyle Battis.

“Bad things happen to good people, and it is difficult to talk about them, especially to authority figures,” Hauptly-Pierce said. “A dog like Liberty makes that conversation more comfortable, and strengthens relationships in the community.”

The label for the beer says it was brewed to recognize Liberty for “assisting officers and civilians in the field” and “providing a calming element for folks reporting violent crimes.”

The pale ale will be released on tap and in cans Friday during a fundraising event at the brewery at 126 Hall Street, Unit B. It will include a Lunchlady Food Truck, pastries from The Cannoli Stop @ The Candy Shop, a 50/50 raffle, and attendees will get to meet the hero dog herself, and her handlers.

Folks will be asked to make $1 donations per drink, and the brewery will write a check at the end of the night to present to the nonprofit supporting the comfort K9 program.

Hauptly-Pierce said the label was designed by graphic designer Steve Lee, who creates all their labels.  He said they brewed a small batch of about 15 barrels (about 500 gallons), which he expects to sell out within only three weeks or so.

Thomas said Hauptly-Pierce has been very supportive of the program. And the Friends of the Concord Police K9 Program has been “outstanding” at raising funds to support the department’s K9 programs.

A patrol K9 program from the early 2000s was cut from the city budget, Thomas said, but they’re working with the nonprofit to raise enough money to offset the cost to the city to bring the program back.