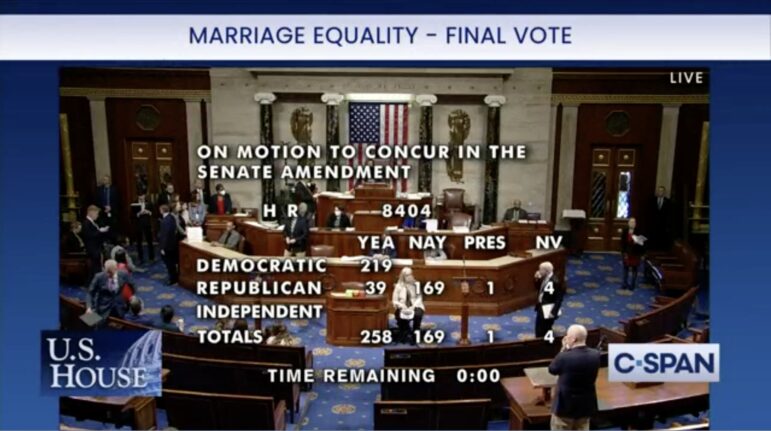 WASHINGTON – Following passage in the Senate, an amended version of the Respect for Marriage Act was passed in U.S. House of Representatives on Thursday with support from both of New Hampshire’s members of the house.

U.S. Representative Chris Pappas (D-NH-01), the co-chair of the Congressional LGBTQ+ Equality Caucus and New Hampshire’s first openly gay member of Congress, said that passage of the legislation held personal significance given the upcoming marriage to his husband Vann Bentley.

“Next year I will marry the love of my life. But if the Supreme Court heeds Justice Thomas’s call to reconsider Obergefell, our marriage won’t be recognized in all 50 states,” said Pappas. “Every American is entitled to life, liberty, and the pursuit of happiness, and the Respect for Marriage Act will protect spousal rights regardless of what the Court does next. We simply cannot go backward, which is why I am thrilled to see this legislation pass the House again today with a strong bipartisan vote. I am grateful that President Biden will sign this into law to protect the rights of all same-sex and interracial couples.”

Pappas’ remarks on the house floor regarding the bill can be seen here.

U.S. Representative Annie Kuster (D-NH-02) also praised passage of the act, joining Pappas, all other Democrats, and 39 Republicans in voting for the act.

“Everyone deserves the freedom to marry who they love and love how they live – that’s why I was proud to vote for the Respect for Marriage Act today to finally make marriage equality the law of the land,” said Kuster. “I want to commend my friend Representative Chris Pappas for his tireless work leading this historic effort. I look forward to the president signing this legislation into law.”

The bill now heads to President Biden’s desk for his signature.