Many of New Hampshire’s nonprofits saw donations surge last year, especially thanks to 2020’s NH Gives, an online event run by the New Hampshire Center for Nonprofits that encourages Granite Staters to support their local nonprofits. Last year’s event “shattered all previous records,” according to an official press release, raising more for nonprofits than the previous four years combined.

Kathleen Reardon, CEO of the NH Center for Nonprofits said the “community rallied around nonprofits,” in last year’s time of need. Last year, 92% of New Hampshire nonprofits reported a loss of revenue, with budgets down an average of 34 percent. The NH Center for Nonprofits reported in April 2020 that virtually all nonprofit organizations that responded to their pulse survey were adapting their services due to disruptions from COVID-19. Reardon said that the struggles depicted in the survey took place before funds that helped nonprofits, like PPP or the CARES Act hit, so there has been at least some recovery to the sector from those programs. She said a new survey for 2021 is on its way.

Nationally, charitable giving was up 7.5 percent in the first half of 2020 according to the Chronicle of Philanthropy. Elizabeth Boris, chair of the Growth in Giving Steering Committee within the Fundraising Effectiveness Project, said in a news release that the increase in gifts under $250 is evidence that donors were inspired to give even amidst the pandemic and the economic uncertainty that comes with it. 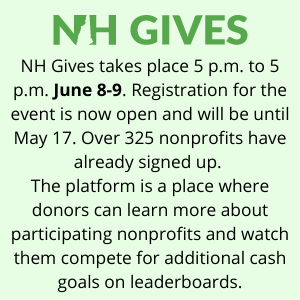 NH Gives, of which The Granite State News Collaborative and its partner NH Business Review are media sponsors among others, started in 2016 in an effort to catalyze charitable giving and make it more of a community event, Reardon said. It was “really heartening,” to see so much engagement with NH Gives last year, Reardon said, adding that the NH Center for Nonprofits remains optimistic for this year.

In a recent NH Gives Strategy Session, several NH nonprofit leaders shared their experience with the event in 2020, many reporting that they exceeded their fundraising goals. A record of over 14,000 people donated during the event, giving $3.4 million over the 24 hours, breaking $1 million in donations in the first eight minutes.

Several nonprofits shared some of their recent keys to success and engagement: including a Zoom celebration for those who donated during a specific window of time, as Erin Graichen from New Hampshire Lakes described, or the emphasis on the “why,” people should donate, as Cliff Blake of NH PBS explained. Methods like these were among some shared strategies the nonprofits used to increase giving even in such a difficult year like last year. Small incentives helped encourage giving, but combining them with the NH Gives event ended in further success.

Leslie Nolan, executive director of Canterbury Shaker Village, shared that her organization’s goal was $15,000, but they raised $109,000. James Tresner, executive director of Wanakee summer camp in Meredith, said his camp received $90,000 in donations. These nonprofits attributed their success to the generosity of those who donated for NH Gives as well as double or triple matching of funds raised.

“Some folks who maybe weren’t interested become interested when they get wrapped up in the day,” Tresner said.

Reardon said arts and cultural organizations, as well as summer camps, have definitely been impacted hard by the pandemic — the arts suffering due to lack of audiences, while camps have had a lack of campers. Tresner said in an email that Wanakee’s income fell 90 percent in 2020 as they were unable to open.

Tresner said they are fortunate at Wanakee that there’s been a huge surge in donations from dedicated supporters in the last year, although this hasn’t been the case for all nonprofits.

“Unfortunately, most non-profits have faced similar realities,” he said, “Many social service organizations had to drastically change or reduce how they serve their community, and whole categories of programs like summer camps and museums became more costly to run if they were able to open at all.”

Will Stewart, executive director of Stay Work Play New Hampshire said his organization has been challenged this past year like a lot of nonprofits. He said their partners, particularly Eversource and Dartmouth Hitchcock Health, have kept Stay Work Play going, but the organization’s leaders have had to reevaluate how to meet their mission, being a typically “event heavy,” organization.

A “double-edged sword,” of the last year has been that need to pivot and that lack of personal touch, combined with the positives of switching some of their events to online, Stewart said. Now that some of these events are taking place online, the reach across New Hampshire is even wider, making it possible to greet people from all over who want to attend from their own space, he said.

Every nonprofit is concerned about maintaining the increased support and giving as New Hampshire progresses out of the pandemic, Reardon said. For continued success in 2021, she said nonprofits must maintain impactful engagement with their communities.

Nonprofit leaders were resourceful and resilient in the last year, Reardon said.

“They stepped up and stepped in,” she said.

“If one thing is really clear from the past year,” she said, “it’s that their (donors) giving makes a difference.”