KEENE, NH —The mother and son found liable in a federal civil lawsuit for selling forged paintings are now suing the media outlets who covered the case.

Nikolas Gascard and his mother, Lorettann Gascard, a former Franklin Pierce University art teacher, want $250 million from the newspapers and other media outlets that published stories on the case, according to a lawsuit filed in Cheshire Superior Court.

In a lawsuit the mother and son filed, the pair allege that media outlets like The Keene Sentinel, New Hampshire Public Radio, The Concord Monitor, and the Monadnock Ledger Transcript, defamed them by reporting on the case incorrectly. Hall, who is also named as a defendant in the $250 million lawsuit, is pushing back along with the media companies as all defendants are seeking to have the case dismissed.

“Despite having been adjudicated fraudsters, and, remarkably, unable to let the matter rest, the Gascards, in a 73-page (plus exhibits), 51-count complaint, allege that they were defamed by the Media Defendants’ reporting of their activities during and before the trial because the reporting could cause a reader to infer that they were accused of criminal, not civil fraud, and that Lorettann Gascard had been accused not just of fraud but also of forgery,” wrote Lawrence Gormley, Hall’s attorney.

Nikolas Gascard, who is representing himself and his mother in court, claims that they were defamed through the media outlets reporting on the fraud allegations and lawsuit. He claims there was a coordinated conspiracy involving the media companies and Hall to damage their reputations ahead of the trial.

“This action involves a prolonged and fraudulent defamation scheme by Defendants to defame Plaintiffs from the time period of 2016 to 2018,” Gascard wrote in his complaint.

Hall first filed a lawsuit against the Gascards in 2016 after he learned that a number of patients they sold him were “crude fakes,” according to court records.

“There was also some credible evidence pointing to defendant Lorettann Gascard as the suspect most likely to have created the fakes,” United States District Court Judge Steven McAuliffe wrote in one court document summarizing the case.

Lorettann Gascard has denied painting the fake Golub’s. The Gascard’s claimed during the trial that all of the paintings were left to Nikolas Gascard by a European aunt as part of an inheritance.

The case was moved out of the Cheshire Court in Keene to the Sullivan Superior Court in Newport where Hall and the media outlets defendants motions to dismiss are being considered by Judge Brian Tucker. 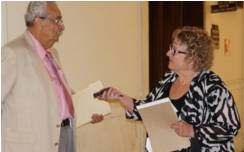