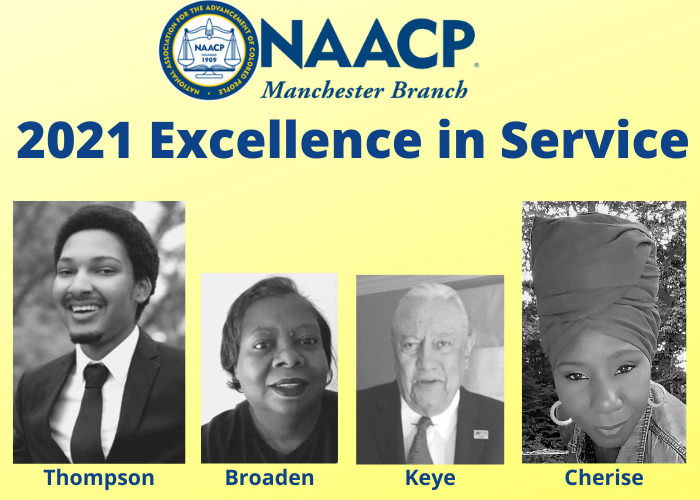 MANCHESTER, NH –The Manchester Branch of the NAACP announced its Excellence in Service Awards at its Freedom Fund Dinner held Sept. 25 at the NH Institute of Politics at Saint Anselm College. The awards recognized those who have gone above and beyond in helping to achieve the organization’s mission to secure the political, educational, social, and economic equality of rights in order to eliminate race-based discrimination and ensure the health and well-being of all persons.

The awards were presented during a hybrid event on the campus of Saint Anselm as well as via Zoom. A keynote speech by Wow Table Founder the Rev. Eric Jackson stressing the need to act in Love as a way to achieve the evening’s theme “Civil Discourse in Civic Engagement” set the tone for the event.

“The speeches from Rev. Jackson and our awardees were inspirational. They are proof that we can have civil discourse in our civic engagement as we strive to make the Greater Manchester Area a better place to live,” said NAACP Manchester Branch President James McKim.

Founded in 1909 in response to the ongoing violence against Black people around the country, the NAACP (National Association for the Advancement of Colored People) is the largest and most pre-eminent civil rights organization in the nation. We have over 2,200 units and branches across the nation, along with well over 2M activists. The Manchester Branch was formed in 1964. Our mission is to secure the political, educational, social, and economic equality of rights in order to eliminate race-based discrimination and ensure the health and well-being of all persons. The Manchester NAACP is a c4 organization (contributions are not tax-deductible).