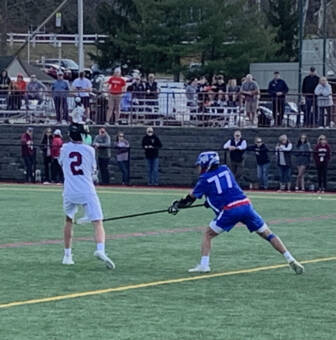 MANCHESTER, NH — With six state titles in his first 19 seasons as Derryfield School’s boys lacrosse coach, Chris Hettler is well aware a team doesn’t win a championship in the first week of the season.

Still, this was a pretty nice way for Hettler and Cougars to kick off the 2022 campaign.

Sophomore Alex Murray scored three goals to lead a balanced attack, as Derryfield topped Winnacunnet, 9-6, in the season-opener for both squads, Tuesday afternoon.

The two teams have a history. Derryfield defeated Winnacunnet, 9-1, in the 2019 D-II State final, the exclamation point on a four-year Cougars’ dynasty. Last season, the Warriors handed the Cougars two of their four losses (15-4).

The intensity of the rivalry was clear throughout the game. Derryfield dominated the first half, building a 7-1 lead. But a furious second-half comeback pulled Winnacunnet to within two goals on two occasions, before the Cougars were able to slam the door. 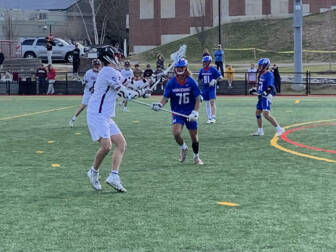 Six different players had goals for Derryfield. The Cougars patiently worked the ball around the perimeter, often making at least 10 passes in a possession before finding a crack in the defense to try and exploit. Junior attack Tate Flint (2 goals, 3 assists) scored twice in the first quarter and Murray (3 goals, 2 assists) netted his first two goals in the second. RJ Proulx, Quinn Silvio and Liam Canty also scored.

“I was really proud of the way the guys came out of the gate,” said Hettler. “We executed well, we took care of the ball in the first half and we capitalized on opportunities on the offensive end.”

But any thoughts the Cougars might have entertained about a blowout quickly disappeared after the third quarter faceoff. Winnacunnet found their fire at intermission and owned the third quarter. The Warriors ramped up their defensive intensity, forcing the Cougars into numerous turnovers.

Offensively, Winnacunnet played with a sense of urgency, attacking and shooting early in possessions. The pressure paid off right away, as Caleb White scored his second goal of game, just 1:04 into the quarter to make it 7-2. 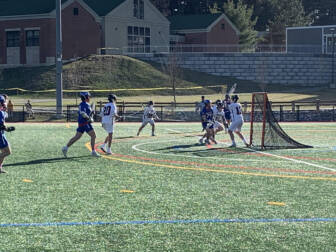 The Warriors were far from finished. They continued to win 50/50 balls, dominate time of possession in the quarter and pepper sophomore goalie Parker Lebiedz with shots. Just 20 seconds after White’s goal, Kyle Tilley scored off a feed from Tanyon Ziolkowski to make it 7-3.

Suddenly, Winnacunnet felt some momentum and confidence and Derryfield, for the first time in the game, was back on its heels. A pair of goals by Ziolkowski, just 65 seconds apart, slashed the Derryfield lead to 7-5 with 6:26 to play in the third quarter and caused Hettler to call a timeout to regroup.

“I had told the kids at halftime, this game is not over,” said Hettler. “In lacrosse, six goals is a good lead but its not a lead where you can just sit back and think the game is over. And (Winnicunnet) is a good team. They’re a perennial (State D-II) Final Four team. They’ve got a lot of athletes, they’ve got a lot of pride.”

Coming out of the timeout, the Cougars found their footing. They started to match the Winnacunnet intensity and physicality and were able to regain control of the game. 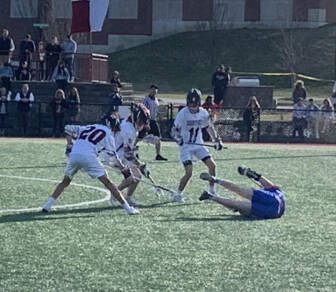 Early in the fourth quarter, Derryfield caught a break when Winnacunnet’s Lucas Botnick was sent off for 1:00 for a crosscheck. It took the Cougars just 14 seconds to cash in. Murray made a nice cut through a seam on the left of the cage, took a perfect feed from Quinn Silvio and slammed home a goal to complete his hat trick and give Derryfield an 8-5 lead.

“That goal was huge to give us a little bit of breathing room,” said Hettler. “I’d said to my coaches, ‘this is a big (power play), we’ve got to score here.'”

The @DSCougars ’ Alex Murray completes his hat trick with this goal, helping Derryfield boys lax to a 9-6 win over @Winnawar in the season-opener for both teams on Tuesday.@ManchInkLink @nhsportspage pic.twitter.com/qfFgJiwWZp

Tilley’s second goal of the game pulled Winnacunnet to within 8-6 with 7:36 to play, but that was as close as the Warriors would get. Lebiedz, making his first varsity start, was excellent. He finished with 12 saves, including three gems in the fourth quarter. None was better than the stop he made on Ryan Ciolfi from 12 feet away with 4:10 to play and Derryfield clinging to a two-goal lead.

“That was an unbelievable save. In that situation, not to blink, and not only save it but save it clean,” said Hettler. “And then for us to be able to get (the ball) downfield and run some more clock.”

Sophomore Chili Cabot, coming off a 1st Team All-State freshman season, sealed the win with his first goal of the season with 46 seconds remaining against Warriors goalie Nash Kelley (7 saves).

Derryfield returns to action Saturday, when the Cougars play host to Bedford at 11:30 a.m.

.@DSCougars boys lax fends off an attack in the second half of its 9-6 win over @Winnawar in the season-opener for both teams on Tuesday.@ManchInkLink @nhsportspage pic.twitter.com/fhkRLibOaL