“One thing is clear from this decision – Secretary Scanlan acted outside the law. From the beginning, this case has been about the integrity of our elections. The courts agreed with our arguments that the Secretary of State did not follow the statutes, exceeded his statutory authority, and should not have taken the action of calling for an additional recount.

“That is why we are so disappointed the Merrimack Superior Court feels this is an extraordinary circumstance and will now allow for a second recount after the Secretary of State declared a winner in the Manchester Ward 6 race eight days ago.

“Throughout this process we have maintained that New Hampshire election laws do not allow for anyone, whether it be a political party or the Secretary of State, to conduct recount after recount until they achieve their desired result.

“We will explore our options in the coming days, but New Hampshire Democrats will be there for the next round of recounts in the Ward 6 race, and regardless of today’s decision by the courts we will never stop fighting for the integrity of our elections.” 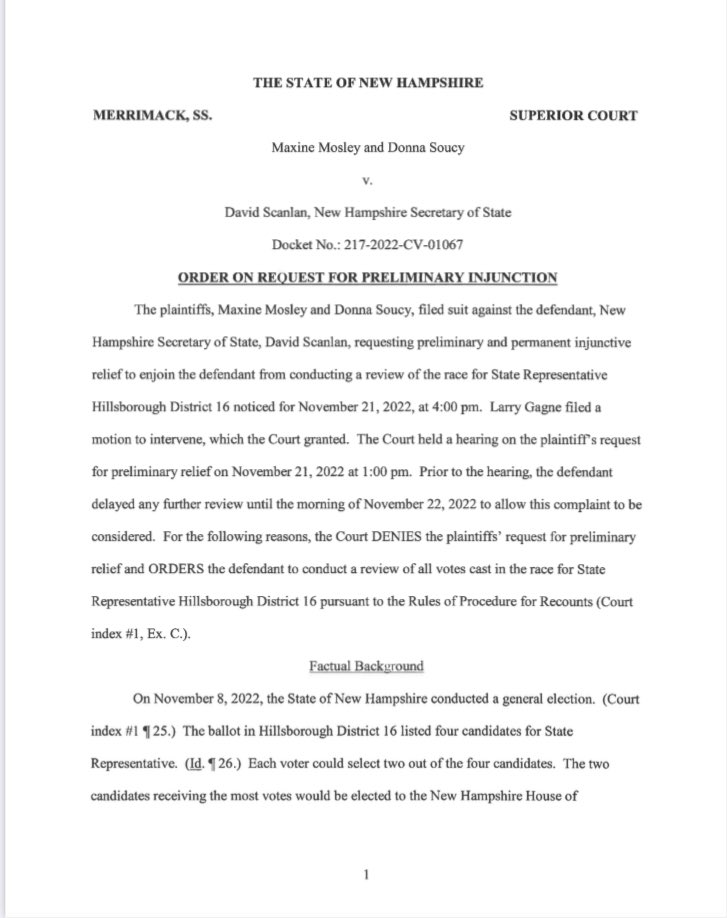 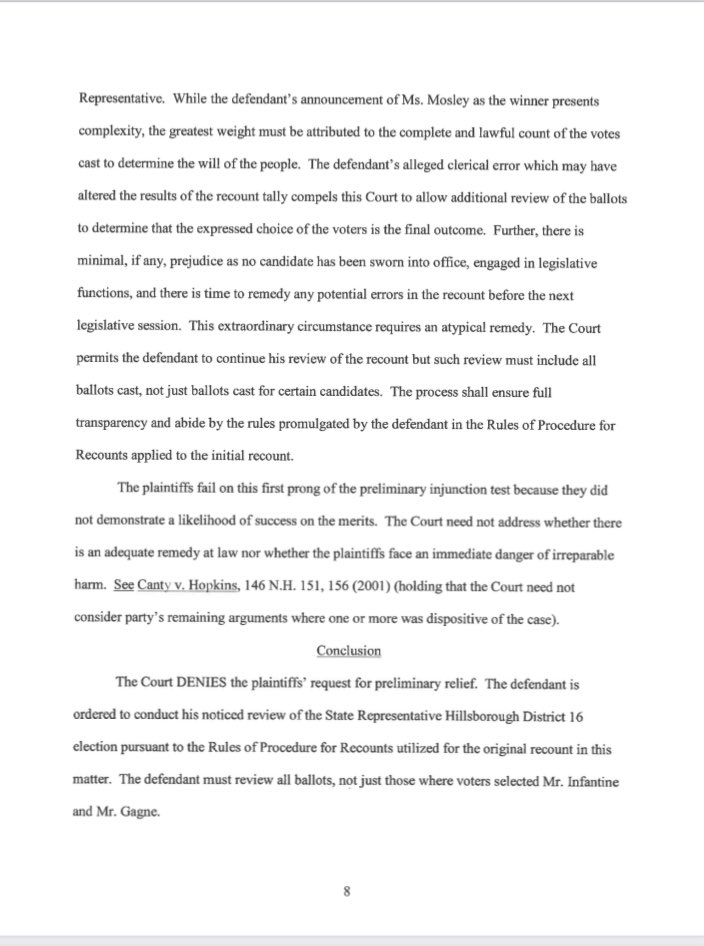 “In an effort to subvert the will of Manchester Ward 6 voters, New Hampshire Democrat leaders have engaged in appalling, hypocritical, and outrageous behavior to prevent all legal votes from being counted,” said Governor Chris Sununu. “I thank Secretary Scanlan and the Court for protecting the integrity of our elections and ensuring the voice of the voters is fully reflected.”

The second recount is scheduled for 1 p.m. at the New Hampshire State Archive.

“The bottom line is that the votes in Manchester Ward 6 were counted twice already, and New Hampshire Election laws do not allow for anyone, whether it be a political party or the Secretary of State, to conduct recount after recount until they achieve their desired result.

“New Hampshire RSA 660:3 clearly states that once the Secretary of State has declared a winner in the race, the only remedy from there is to take it to the Ballot Law Commission. The Secretary of State declared a winner in the Manchester Ward 6 House Election on Monday.  Even the new audit statute RSA 660:17b, which was passed by the Republican-led legislature and signed by a Republican Governor, states that another recount can only happen if the discrepancy between an audit and the recount number is one percent or greater. The discrepancy between the recount and the audit of Manchester Ward 6 is less than one percent.

“The NH GOP wishes to ignore its own election laws and do another recount in this race in the hopes of overturning an election that was done fairly and counted accurately by the Secretary of State’s own staff.

“It’s unfortunate that Secretary Scanlan is clearly ignoring New Hampshire election law, but we will do whatever it takes to protect the integrity of our elections.”

UPDATE 11/21 12:49 p.m. – What is being termed as the continuation of the recount has been postponed until Tuesday at a time to be determined.

In the statement, he references a portion of the Nov. 20 New Hampshire Union Leader where New Hampshire Secretary of State David Scanlan said that paperwork was not filled out for over votes (ballots that had too many votes in a particular race.)

Someone who is unable to count 4,000 pieces of paper without screwing up should not be commenting on how others prepare official documentation. This is especially given the fact that Ward 6 team does an impeccable job at managing elections cycle after cycle, and in contrast with many other polling places, including some right here in Manchester.

Since I personally worked under Moderator Louise Gosselin this election and stayed after polls closed to assist with write-ins and paperwork, I can vouch for the accuracy and precision of documentation that our team submitted to the City Hall. All write-ins and hand counts were correctly processed with all information reported on the forms without any errors. From our Ward 6 team to the City Clerk’s office, everything was done by the book and in accordance with New Hampshire law.

The Democrats, while fully aware that their candidate received fewer votes than incumbent Rep. Larry Gagne, are trying to snatch this seat on a technicality. Under New Hampshire law, a recount may only be conducted once.

But this technicality was made available to them through the complete incompetence of the Secretary of State’s office, who apparently noticed that “paperwork was not filled out completely,” yet didn’t notice how many total ballots they were supposed to have after the recount, which should be the starting point and basis of every recount.

I am equally disappointed in Republican observers and attorneys, who were there on behalf of Rep. Gagne’s team and failed to raise questions as to how the vote difference shifted by over 20 votes.

Instead of blaming others while making silly, yet costly mistakes, Secretary of State Scanlan should take responsibility and resign. With this kind of attitude, I am not confident in his office’s ability to run elections smoothly going into the 2024 election cycle.

UPDATE: Nov. 17, 1:32 p.m. – There will be an audit on Monday, Nov. 21 at 4 p.m. to make sure all ballots have been counted. The New Hampshire Democratic Party has filed an injunction in an attempt to stop the recount.

“It was obvious immediately following the results from the recount that there was an error,” said Manchester Republic Committee Vice Chair Brian Cole. “Typically recounts may change one or two votes, but not swing 17 votes. We have every confidence that Larry Gagne defeated Maxine Mosley and it will be proven by the audit of the recount.”

CONCORD, N.H. – Following a recount, Democrat Maxine Mosley has now defeated Republican Larry Gagne in the Hillsborough 16 House District, consisting of Manchester’s Ward 6, by a final total of 1799 to 1798.

On Monday evening, Mosley said she was overwhelmed by the result, and was told by Secretary of State representatives that a swing of more than nine votes is rare, so this result was historic.

“I did not really anticipate that I could pull it off, but I wanted to use the process of recount to make sure that everyone that supported me knew I was doing everything in my power to have the most verifiable vote at the end,” she said. “I will take today as a win with great, great gratitude.

“It’s very unusual, especially in Manchester with the machines we have to make up 24 votes, we were winning by 23. I don’t know what happened,” said Gagne.

Mosley also praised Gagne as well as Republican Will Infantine and Democrat Holly Hillhouse, with the four seeking the two seats from Hillsborough 16.

“Everybody was gracious and there was no nastiness and no negative politicking, it was as it should be, you run on your merits. I am very appreciative of all of candidates,” she said.

“We are ecstatic to learn of Democratic candidate Maxine Mosley’s win in Manchester Ward 6 following today’s recount. With today being just the first day of several extremely tight races, we look forward to the remaining recounts,” he said. “We appreciate the professionalism of the staff at the Secretary of State’s office and the State Archives for their work in this process, and to our recount team on the ground, whose careful review of ballots aided in today’s result.”

There is no word as of yet whether there will be any challenges to the recount.