MANCHESTER, NH – More than 100 people – and one bearded dragon – attended a Neighborhood Watch organizational meeting earlier this week in Ward 6. Already bonded over annual block parties and holiday food drives, the majority of these neighbors, who identify as the Holt Ave Community, came out because they want to know how to preserve their quality of life.

Things have been changing over the past year or two in the neighborhood, many said. And it’s not for the better.

Manchester Police Sgt. Emmett Macken and Community Policing Officer Anna Martin arrived promptly at 6:30 p.m. to get the meeting started. Macken said the turnout was the best he’d ever seen at a neighborhood meeting.

“This is great to see,” Macken noted, before running through the basics of organizing and sustaining a community watch group – tips included hold regular meetings, have a “point person” to field complaints and pass them along directly to police, establish an email list, download the city’s Manchester NH Connect app, report anything that troubles you, and remain vigilant.

Perhaps most important, neighbors need to understand that calls for service on any given day outnumber sworn officers on patrol. When his shift starts at 3 p.m. there are an average of 32 calls already stacked.

“Those calls don’t go away, so we end up playing catch-up all night,” Macken said.

Macken’s rundown on availability of officers was in answer to a few people who said they’d made calls to police and then waited hours just to have nobody show up. He said he has three “area officers” for the entire city, and they are in high demand on a daily basis.

One of the watch-group organizers, Daniel Mowery, said knowing police are short-staffed should encourage people to do all they can to prevent crime, like locking their car doors, putting up motion detector lights and setting up Ring cameras. 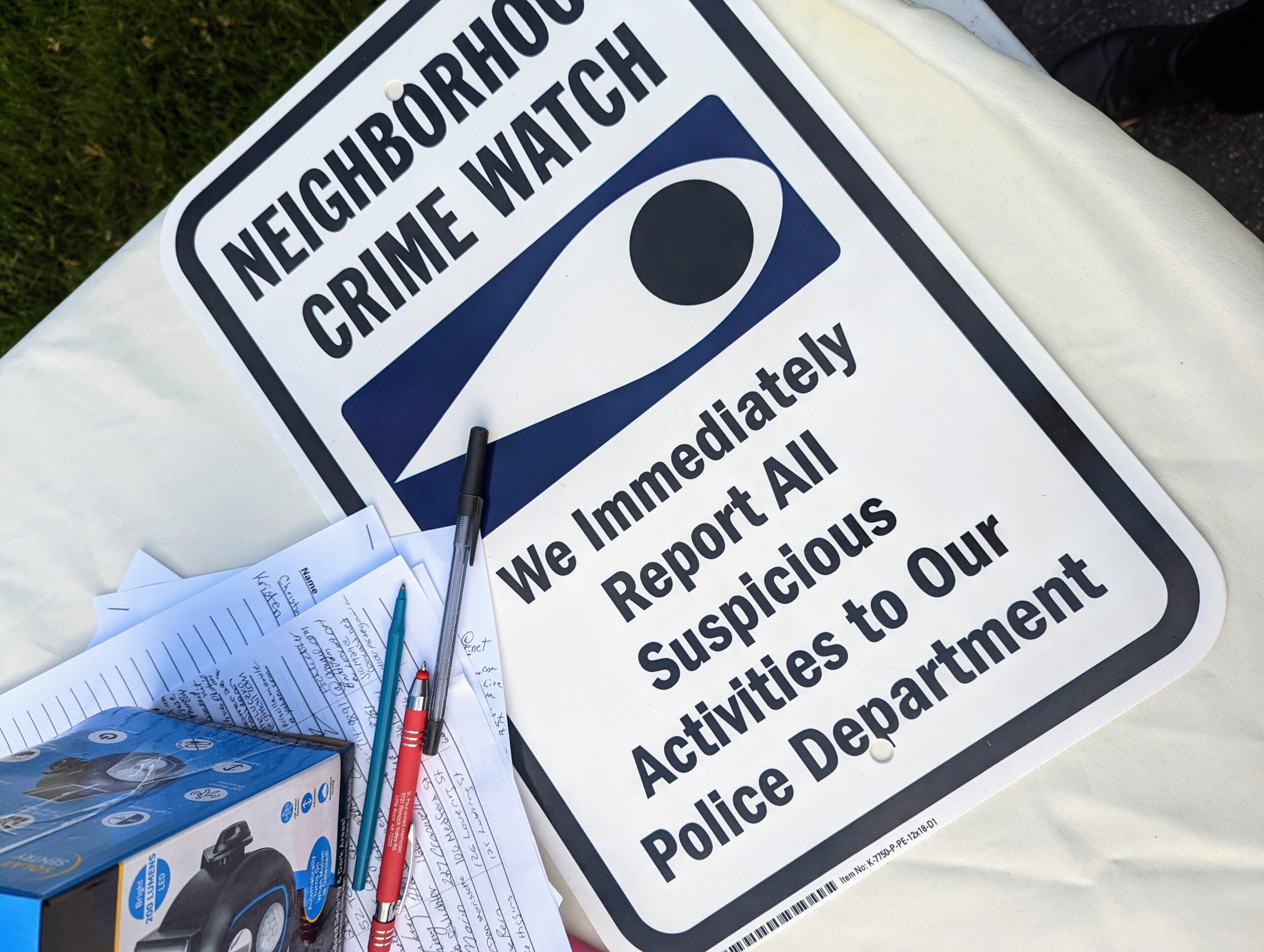 Macken said that the popularity of watch groups in the city ebbs and flows year over the year, but the pandemic made it even harder for neighbors to come together.  Mindy Huckins, who helped organize the meeting along with Mowery, who hosted the meeting in his front yard, says it was the pandemic that in some ways brought neighbors even closer together.

“We went old school over COVID as all we could do was walk around and look at each other’s yards and flowers,” says Huckins. She said the big turnout underscores the fact that the Holt Avenue neighbors want to take care of one another.

A social worker, Huckins said the main goal is to keep a log of reported crimes and stick to the facts.

“Emotions run high when people feel unsafe, and we do hear some stories that may not be quite accurate,” Huckins says, referring to several reports of a man living in a home on Candia Road who has been spotted by many neighbors walking around and, according to some reports, peering into windows and unnerving a lot of people.

“Someone was upset because he was seen sitting on a bench outside the church. That’s what the bench is there for,” Huckins said. “We don’t know his situation or his mental status and we shouldn’t make assumptions. At the same time, when people have called police for help, the police have not shown up. And this is what leads to problems.”

Mowery clarified that police did make a follow-up call about the man in question, whose photo had been circulating among neighbors after he was seen hiding in some bushes. The man was questioned by police and released. “They said he was not a danger to himself or the community,” Mowery said.

Macken also emphasized that it helps police when residents can send Ring video or other images directly to police, and that even if someone apparently got into your car but didn’t take anything, it should still be reported.

“Call it in and if we have three or four other calls we can link together we can build a case,” Macken said. “We’re getting 10-12 videos a day.”

Ward 2 resident Rich Girard had ventured out of his own neighborhood to attend the meeting because he was interested to hear more about the Candia Road residence in question, as he said he suspects it’s an unlicensed group home.

“I’ve been following this neighborhood’s issues for a while and it sounds similar to issues in my neighborhood, and others. I wanted to compare notes,” said Girard. “This is why zoning exists, to protect neighborhoods from these type of incursions which do damage to peace of mind and the peace and quiet of neighborhoods.”

Macken confirmed that the range of concerns bubbling up in Ward 6 are not unique.

“The issues you’re experiencing here are the same as what we’re seeing citywide,” Macken said. He mentioned complaints about four-wheelers, speeding vehicles on Lovering Street that don’t stop for stop signs, suspicious vehicles parking off East Industrial Drive, stolen packages and, of late, concerns about the Candia Road residence and those who live there.

“My biggest concern is my family’s safety, and the safety of my neighbors,” said James Lessard, who moved to the Holt Avenue neighborhood four years ago from Haverhill, Mass. He and his wife Kristen agree they felt safer there.

“We didn’t have to lock our doors there,” Lessard said, adding that is one reason why he asked Macken during the meeting about residents arming themselves, as he does.

“I know the laws. I just brought it up because I want to make sure people understand they have other options. If they find themselves in a predicament, they can defend themselves,” Lessard said. His sense of safety has shifted in the past few months and he suspects it has to do with the city sweeping homeless camps.

“I get why they’re doing it but maybe they should have had a better plan in place for where those people could go before doing it,” Lessard said. ‘Operation Clean Out’ or whatever they called it, was premature in my opinion.”

He said he had another question he didn’t get to ask, which was whether people can place another person under “citizen’s arrest,” detaining them until police arrive. “We have a Ring camera and so do a lot of our neighbors, and it has all the neighborhood reports on it. They’re getting more brazen. We had a guy going around banging on doors and yelling ‘help’ just to get people to open their doors. I want to know if we have the right to hold them.”

His wife said lately she hesitates to take her twins outside to play in the yard.

“Our doors are always locked and I don’t even like to be in the yard anymore,” she said.

Dave Alperovitz was taking home a plate loaded with meatballs and macaroni for his wife, who couldn’t make the meeting. Mowery’s cheeseburger meatballs are popular with the neighbors and were definitely a draw for this meeting, along with other light fare and desserts. Those who attended were all given raffle tickets to win one of three motion-detector lights and a security camera, donated by Mowery’s car service business.

One of those lucky winners was Ross Terrio of Ward 7 who, like Girard, crossed Ward lines to attend. He said he admired the way this neighborhood comes together.

“There are some parts of the city that have more apartments and so naturally residents are more transient. Here there are a lot of neighbors who have roots and that’s a big part of involvement, whether you feel tied to your community,” Terrio said. He also brought tidings of solidarity from Ward 6 Alderman Sebastian Sharonov, who could not attend because the meeting overlapped with a scheduled Board of Mayor and Aldermen meeting.

“In my ward we have a group that meets at the firehouse. We get maybe 20 people. Dan has really built this up, “Terrio said, pleased to be picked for a door prize.

Within 24 hours Huckins had circulated meeting minutes to everyone on the email distribution list with a summary of what was discussed. She said the goal will be to meet monthly and to keep everyone in the loop in the meantime.

“This is a good neighborhood and we want to keep it that way,” she said.