Since his occupational focus is on kids at risk of falling through the educational cracks through his work as Executive Director of Helping Our Pupils Excel Inc., a mentorship program, last year he decided to throw a big Christmas party at the Derryfield Country Club. Admission was a gift. Donations of money, gift cards and gifts came pouring in, including a load of new bicycles from Brady Sullivan Properties, and in the end they filled two U-Haul trucks. The gifts were distributed through Manchester Housing and Redevelopment Authority to families receiving city services.

⇒Tune in for Dec. 4 Miracle on Elm Street Radiothon here. Make a tax-deductible donation via Paypal here. All proceeds will provide holiday gifts for Manchester kids in need.

Kristine Hall, who has worked for 25 years for MHRA and is currently Resident Services Director, said it was the first of its kind gift-giving outreach for the housing authority.

“Matt reached out to us last year and asked if there was a need, and we said ‘definitely!’ We were able to distribute toys to 154 of our public housing families, which included 373 kids, and we even had a few toys leftover. We’re partnering with Matt again this year and are going to distribute gifts to our Housing Choice families. The list is a little bigger than we thought, and given the pandemic, we’re hoping it will go well,” Hall says.

There are currently 180 families on the list, with another 185 on the waitlist.

Courchesne says he knew this year was going to be tricky if he was going to keep the momentum going. With COVID-19 a blowout party wasn’t going to be an option. Instead, he also reached out to his friend Peter White, host of the Morning Show on WMNH-95.3 FM radio. Courchesne stops by the show frequently to talk about his work with students through HOPE Inc., and knew there was a dedicated base of listeners who might be able to help.

White, born and raised in Manchester, said he immediately wanted to partner with Courchesne, knowing first-hand that of all the things about the city that have changed over the years, one thing that hasn’t is the persistent need.

“I grew up in center city and was an only child. I had more than some of the kids had. But I do remember some of my friends didn’t have a lot and I remember thinking ‘they’re not having much of a Christmas.’ No kids should ever feel like that,” White said.

As soon as they two made an announcement about the initiative over the airwaves, the donations started coming in. First to hand over cash was former Central High School phys ed teacher Don Tibbetts, who happened to be visiting in-studio from Florida, where he retired to several years ago. Next up, a phone call from Jeff Nyhan, a friend of the show and Real Estate agent for Coldwell Banker. He pledged $250. 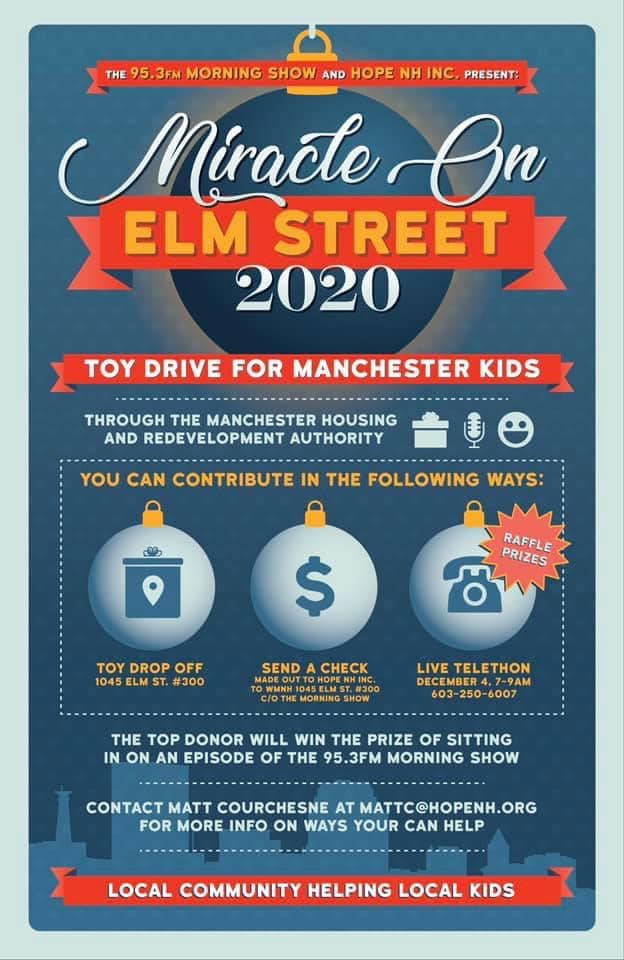 Others began making pledges and several downtown businesses have jumped on board.

Tim Baines, owner of Mint Bistro, announced via Facebook that for every donation to the cause of $40 or more he would serve up a free order of Mint’s signature short rib nachos. Pat Mills of Bonfire Country Bar, along with Baines and Jim Pliakos of The Shaskeen, are working together to gather up raffle prizes to be auctioned off during a live radiothon on Dec. 4 from 7-9 a.m. as a final fundraising push. Top donor gets to sit in on the Morning Show as a guest of honor. Tune in at 95.3 FM on your radio dial, or via the Morning Show with Peter White Facebook page.

This year Sports Mill on South Willow Street will be asking participants in their annual Dec. 5 Cornhole for Christmas tournament to bring two unwrapped gifts to boost the Miracle on Elm Street initiative. There is also a toy drop box at 198 Hanover Street for donations of unwrapped toys and gifts.

“Most of the time, for me, I only see good in our community,” Courchesne said.

Not because he is oblivious.

“I could have gone either way in life. My childhood was terrific and I credit my parents, my uncles and friends of the family. It was a community effort, especially after my dad died. They looked out for me and helped guide me. I say it all the time but it’s about respect, trust and loyalty. We need to get back to that as a community. Our kids need our help and guidance, especially those who weren’t as lucky as me to have a caring community of adults around them,” Courchesne says.

Hall said they have divided up their list by age and figure the group of kids that gift donors should keep in mind are boys age 10-13 and girls, age 14-16, often the hardest groups to buy for.

“A lot of older kids like the techie stuff, earbuds, headphones, small drones, and they’re also open to clothing, because some of the older kids aren’t into toys or tech. We’ve already gotten some hooded sweatshirts in, so whatever the hot item is this year, that would be great,” Hall says. She recalled as one of six kids growing up, some years were lean, but the annual new pajamas were always a hit in her family.

Once the fundraising ends on Dec. 11 Courchesne will take all the gifts that have been collected to be separated into categories. Families will be able to come through and select a toy or gift for their child, at least one per child, and then they can go to a wrapping station to have the gifts wrapped up, Santa style.

It’s not about being naughty or nice. The important thing is the message this kind of outreach sends to kids who might not always feel like they’re on anyone’s “important kid” list.

“We’re just trying to help out at a time like Christmas, and letting them know that the people of Manchester care about you. It’s an important message, one that’s needed – especially now, when there’s so much uncertainty in the world,” Courchesne said. “There are so many good things happening in Manchester and we don’t always get to talk about it,” he said.

“I had my adversities growing up but the people around me picked me up and carried me through, and someday these kids will be there when it’s their turn to pick someone up and carry them through,” Courchesne said.  “What keeps me up at night is worrying about those kids who are forgotten. We want to make sure Santa makes it to every house, and with the help of Manchester Housing, I think we can do it again this year. Let’s see what Manchester is made of.”

How to participate in Miracle on Elm Street: