MANCHESTER, NH — I met Ching Juhl at an Andrew Yang watch party in Manchester on Wednesday. Camera in hand, she was streaming video of her fellow supporters cheering on their guy as he participated in a CNN town hall event.

As it turns out, she’s a documentarian; before this, she shot a film about the Italian photographer Federico Busonero. I wanted to know more about her, and Juhl was kind enough to meet me for an interview the next day.

In fact, she was so nice that she offered to drive me back into Manchester after my second Uber inexplicably bailed, and even hooked me up with a copy of Andrew Yang’s The War on Normal People: The Truth About America’s Disappearing Jobs and Why Universal Basic Income Is Our Future.

Let’s talk about this book …

“I am sold when I read this. I also own the audio recording … It talks about so many things in detail and it is a very easy-to-read book and it is like an autobiography … It is not like a preaching type of book. It is very personal talking about how he gets there, what he gets done and, specifically, [how] America [is] facing the problem of poverty, medical stuff, automation, education, etc.”

What is your favorite part?

“I don’t know if I have a favorite part … The education part is straight to the point for me since I teach at the university level and I have a son in college right now. So it touches my sort of area. I [have taught] music for 30 years.”

Was it this book that put you on to Yang?

“My school mate when I was in college lives in Boston and she told me about Andrew Yang, and I did not pay too much attention. She said she was coming to New York to attend a rally in May 2019 last year and I said, “Okay, you come and I go with you because I like to shoot stuff and I like to capture events.” For whatever reason, she did not make it, and I said I already canceled my schedule so I went anyway. I went with no expectations and I did not know anything about Andrew Yang. I was very impressed not just by Andrew Yang’s appearance, but I mostly was touched by the people. There were so many people there and they were not all even Chinese …

“I relate to him because he is Chinese, and we don’t have Asians in the political front … So that was my first dosage of Andrew Yang … Three weeks later, I met Andrew Yang on June 4 and took [a] picture of him.

“I think my liking or becoming a fan of Andrew Yang is very much like many people. There is a process. First of all, you are curious, then you discover, then you research, and then the cycle continues. You discover more things. The more I do things with Yang Gang, I am inspired … People are so selfless, smart, they know his [policies] inside out.”

What other states have you been to for this?

“I have been canvassing in Connecticut. I went to Iowa for two weeks—an amazing experience. I only planned to go there for one week.”

In your bio on YouTube, you talk about the camera. I want to get to know your artistry … about shooting with the iPhone.

“First of all, the quality of the iPhone is getting better and better … I even bring my iPhone with a camera on it to shoot classical music concerts. It comes out pretty good. I like the mobility of it. I do not like to carry heavy things, schlepping … I have like 30 hard drives. The whole editing process takes so much more time when I am not using the iPhone … If you see any of my work on YouTube, I would say in the last six months, it is all done on the iPhone.”

Tell us about your YouTube channel [Juhl Media]. How many subscribers do you have right now?

Are you getting paid for that?

“No. I am not monetized yet. I applied for it, but for some reason I did something not appropriate before. I record music, and somehow there is a ton of copyright issues which probably prevents me from monetizing my video.

“I [have] made like 96 films about Andrew Yang … I feel video is like you shoot something without lighting or editing, so I film Yang Gang supporters because I feel their voices need to be heard. Every time I talk to them they are so amazing.”

If [someone else] wins, what are your plans?

“I think I will be okay because this movement brings people together. This movement brings us to think harder. Like [the slogan] says, “Make America Think Harder [MATH].” It brings out so many wonderful qualities of people and brings out so many issues we have not talked about yet, so I think it is worth the fighting. It is like a game—you know you either win or lose. When you play basketball, there is no third possibility. You either win or lose. I think I will be okay if he does not make it; he probably will be offered some type of cabinet position.”

Boston Institute for Nonprofit Journalism is operating from a pop-up newsroom at The Shaskeen on Elm Street. 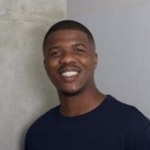 Nyadenya is a photojournalist and reporter from Boston who enjoys writing and illustrating comics.