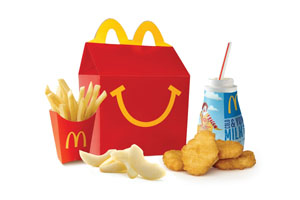 McDonald’s regulars  will see changes to the Happy Meal menu as early as June 2018, when 100 percent of the meal combinations offered on Happy Meal menu boards in the U.S. will be 600 calories or fewer, and 100 percent of those meal combinations will be compliant with the new nutrition criteria for added sugar, saturated fat, and 78 percent compliant with the new sodium criteria, the company announced on Feb. 14.

With these planned menu updates, there will be average reductions of 20 percent in calories, 50 percent in added sugars,13 percent in saturated fat and/or 17 percent in sodium, depending on the customer’s specific meal selection. These reductions reflect the average nutrition data of U.S. Happy Meal offerings on the menu last year compared to those planned for later this year.  Already, several of the Happy Meal combinations available on U.S. menu boards today meet the new nutrition criteria and will not be changing.

The company is also using its “scale for good” to inspire a passion for reading and will continue to spread the joy of reading to more families.  Since 2001, the company and its franchisees have distributed more than 370 million books in Happy Meals. “Happy Meal Readers” continues to expand, and by 2019 children in more than 100 markets will be able to choose a book or toy year-round in their Happy Meals.