We weren’t ideal together in this world. When you lined us up, more often than not we repelled, my mother and me, like certain magnets, the highly-charged space between us impossible to bridge. Only later in her life did my mother loosen her grip on my free-spirited world enough to see me in the context of who I’d become.

Whatever rebellions I’d led against her in my youth — whatever assaults on her maternal authority — were forgotten by her in those last years.

In the end, I was a perfect daughter, she would say. And I gratefully accepted the gift of her selective memory, relaxing my own notion of her judgemental world, once and for all.

She was a lefty. Her handwriting sloped downward and her penmanship was decipherable, at best. When the dog chewed up the Valentine she’d sent that year, I didn’t know it would be the last. But something in me gathered up the tooth-punched pieces for safe keeping. Once in a while on a slow morning, I’d pull the scraps from the plastic bag and strain to read the looping script. Her message was hopelessly lost to me, but it was always just enough to bring me to tears, the thought that my mother’s hands would never again write me a love note, Valentine’s Day or not.

Anna Mary Allen was born on July 3, 1918, the daughter of Victorian parents, eldest of two. She was not like the other girls — she moved far from her East Chicago Indiana, home for an Ivy League education at University of Pennsylvania, mastering psychology and social work. As an aside, her brilliance led her to fluency in French and German, mainly because it enhanced her love of classical music. She knew Mozart’s works by heart and recited their Köchel chronology by ear. “Ahhhccc,” Mom would say, eyes closed and lost in the music, uttering the sound of appreciation beyond words in any language. “That’s Mozart’s piano sonata K330 in C Major. First movement,” as a flurry of notes spilled from the hi-fi, always tuned to WFLN, Philly’s classical music station.

Her compulsions were expansive, beyond vinyl recordings of every great composer known to man loosely arranged and overflowing into a compulsive collection of storage cabinets. She also chain-smoked into the early 1970s, and collected small colored-glass vases, for rosebuds, and bone china teacups, for afternoon tea. She subscribed to so many monthly magazines that the stacks were piled two-publications wide by 2-feet deep for all the 19 years we lived together. She read promiscuously and voraciously — D.H.Lawrence to Billy Graham.  She later discovered she could listen to religious cassette tapes while she read, sponging up every kernel of knowledge available.

For all the flaws I’ve ever ascribed to my mother, I don’t know if I ever fully understood or appreciated just how boundless her capacity for knowledge was, even now.

I was more preoccupied with the idiosyncrasies of her intelligence and how she relied on regimentation to survive, just as she came to be tethered to an oxygen tank in the end. She had a specific way of watering her African violets, of hanging laundry to dry in the bathroom, of leaving herself copious, cryptic notes detailing everything from grocery items to affirmations from Jesus. She dusted around objects and vacuumed a solitary path through the living room. She drove to the supermarket, daily, in her old ’55 Chevy to answer God’s calling to find those in need of prayer, who would turn up in the cereal aisle, finding what they really needed — a dose of my mother’s spirit-filled, prayer-inspired social services.

When my mother gave up the writings of Edgar Cayce for the Gospels according to Matthew, Mark, Luke, and John, when I was 14, I was relieved. My mother was so distracted by her new-found gifts of the spirit that I could finally breathe the sweet air of freedom that had eluded me, under my mother’s controlled atmosphere.

So if I spun a little out of control, maybe it was because my maternal string had been so tightly wound.

I hate to think I had screwed things up for myself.

Still, when I had to tell my mother that, at 16, I was going to make her a grandmother, I did not expect her innate social worker to wrap me up in a protective blanket of understanding, but she did.

Looking back now, it was the best gift I could have given her at 58 — I had apparently done enough to single-handedly wear down her sharp edges so that, when my first born arrived, my daughter could be received, completely and unconditionally, by her grandmother’s open arms.

And that is when the secret of motherhood magnetism began to reveal itself to me. It is an organic, unflinching force beyond our ability to control it, obvious to me as I saw my mother latch onto her granddaughter with the subatomic urgency that had escaped us. I began to realize that it wasn’t her, or me.

Our mutual complexities interfered with the natural pull I thought she lacked. But reflecting on it all, here and now, I know my direction in life was set by the precarious pivot on which we intersected.

Like a compass needle, her magnetism pointed me exactly in the direction I needed to go, whether we ever really knew it or not. Just as the invisible moon pulls at the ocean — even through a sky of clouds — my mother continues to move me. She did not fail me. I did not fail her. We were the best we could be together, and in that way, we are ideal; the space between us no longer impossible to bridge. 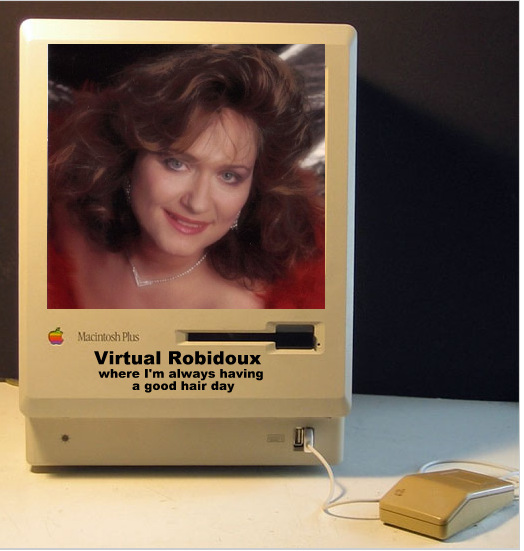 Carol Robidoux is editor and publisher of ManchesterInkLink.com. She enjoys sharing her 1992 glamour photo whenever and wherever possible.