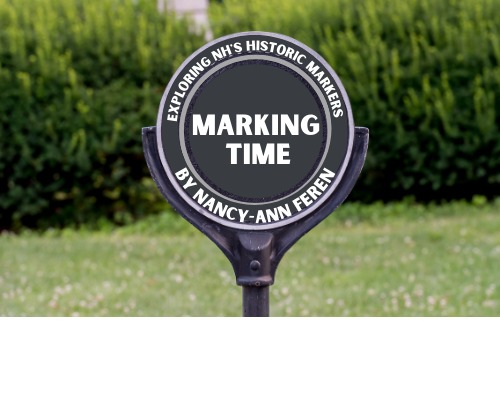 We started our tour of the Dartmouth/Lake Sunapee region in the town of Canaan where we came to a marker for Noyes Academy with information which both surprised and disturbed us.

“Chartered in 1834 by Samuel Noyes and other Canaan citizens, it was the first-known upper-level co-ed school in the US open to African Americans. The school opened in 1835, but months later, outraged opponents used a team of oxen to drag the Academy building down Caanan Street and forced the Black pupils out of town.”  With further research I learned that it took nearly 500 white men and 100 oxen to pull the school building off its foundation and pull it a mile down the road. The mob fired cannons into the homes where the African Americans were staying; the students were able to escape.

Another stop was at the Enfield Shaker Village. Although we have been to Shaker Village in Canterbury many times, we had never been to the one in Enfield.

“Founded in 1793, Enfield Shaker Village was the 9th of the original Shaker communities established in the U.S. At its peak about 1850 some 300 Shakers lived, worked, and worshipped here, practicing equality of the sexes, celibacy, pacifism, racial equality, and communal ownership of property. This self-contained community farmed 3,000 acres and maintained more than 50 buildings along four miles of highway. Surviving Shaker buildings include the 1837 Great Stone Dwelling, one of the largest Shaker structures ever built. The Shakers left Enfield in 1923.”

This is a place where we definitely want to spend more time when Covid restrictions are eased. Not only can you tour the buildings and explore the gardens, you can also stay overnight in the Great House.

We had been to Saint-Gaudens National Historic Site in Cornish, but there are several other interesting places to see.

“The Cornish Colony (1885-1935) was a group of artists, sculptors, writers, journalists, poets and musicians who joined the sculptor Augustus Saint-Gaudens in Cornish and found the area a delightful place to live and work.”

Adjacent to this marker on NH Rt. 12A is the Blow Me Down Mill which was built in 1891 and used as a grist mill for the community.

Also on Rt. 12 A is the Cornish-Windsor Bridge. It was built in 1866 and is both the longest wooden bridge in the United States and the longest two-span covered bridge in the world. We drove across the bridge from Cornish to Windsor, VT, and back again.

Another place of note in Cornish is the birthplace of Salmon Portland Chase, “U.S. Senator from Ohio (1849-55), Governor of Ohio (1855-59), a founder of the Republican Party and leader in the anti-slavery movement. After serving as Secretary of the Treasury in Lincoln’s Cabinet, he was appointed Chief Justice of the United States. The Chase Manhattan Bank in New York was named in his honor.”

Another interesting building in Cornish is the Cornish Meetinghouse. This marker had not been installed on our first visit so we made another trip to see it. The meetinghouse was built in 1803 as the First Baptist Church. The hand-wound clock was installed in 1845 and still keeps time.

There are two historic churches across the street from each other in Claremont.

Old St. Mary’s Church was built in 1823 and is the oldest Roman Catholic building in the state. It served St. Mary’s parish and contained the first  Roman Catholic school in New Hampshire. The parish was relocated to Central Street in Claremont in 1873.

Union Church, a “wood-framed structure, built 1771-1773, is the oldest standing Episcopal Church in the State serving the second oldest parish.” It is still in use.

In Newport we stopped to see the marker for Sarah Josepha Buell Hale (1788-1879) who was born in Newport and taught school there. She is most noted for three things: composing the poem now called Mary Had a Little Lamb;  for appealing to five presidents to formalize a National Day of Thanksgiving which was finally proclaimed by President Abraham Lincoln in 1863; and for campaigning constantly for higher education for women.

Charlestown boasts three historical markers, all very close to each other on Main Street. One commemorates General John Stark’s Expedition to Bennington in 1744 “to impede a British invasion from Canada into eastern New York …At Charlestown’s Fort No. 4, forces were assembled with food, medical supplies and military stores.”

There is a separate marker on Main Street for the Fort at No. 4 but the re-created fort is actually located on Springfield Road. It was a mid-18th century fortification which was built to protect the northernmost British settlement along the Connecticut River. Living History weekends are generally held throughout the summer and fall. Charlestown also has a marker in honor of Carlton “Pudge” Fisk who grew up in Charlestown and “played professional baseball for the Boston Red Sox and the Chicago White Sox from 1969 to 1993, where he set several records including most home runs by a catcher and most games caught…He was inducted into the Baseball Hall of Fame in 2000.”

Nancy-Ann Feren is a native of Manchester, NH and a graduate of Machester Central High School. She has a BA from Wellesley College and MAT from the University of New Hampshire. She is a retired Manchester teacher and the author of  Not Your Average Travelers: 40 Years of Adventures in All the U.S. National Parks. She and her husband have traveled to all 50 states (48 of them with their 3 children) and to all 7 continents. She can be reached at nferen@comcast.net