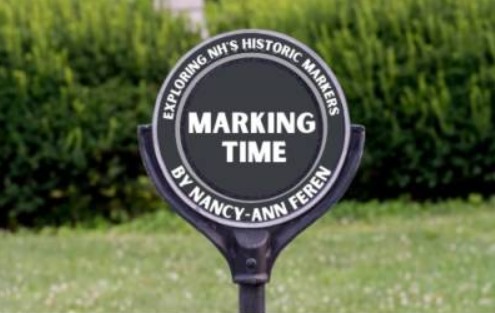 Continuing our explorations in the Lakes Region, we headed to Rochester.  In addition to seeing all the roadside historical markers, we were also taking part in the Five Hikes Challenge sponsored by the  Society for the Protection of New Hampshire Forests. One of the hikes was in Champlin Forest in Rochester. It was nice to take a peaceful walk in the woods, followed by a socially distanced visit with friends, in between drives to markers.

What is now the Governor’s Inn and Restaurant in Rochester is the combined estates of two brothers, Huntley N. (1869-1955) and Rolland H. (1873-1942) Spaulding. Each served as governor of New Hampshire. “They were among the foremost industrialists and philanthropists of their times.”

Not far from the Governor’s Inn is Rochester’s Arched Bridge. “Designed and built between 1881 and 1883 by Silas Hussey, Jr. (1828-1913), this bridge is unique in New Hampshire in having heavy brick arches faced with split granite. Its fifty-foot width was exceptional for the time.”

At a site in Farmington, next to the historical marker, is a boulder engraved with the name of Henry Wilson, the only vice-president from New Hampshire, stating that he was born here in 1812. There are two small American flags next to the rock.  The marker provides some additional history. “Jeremiah Jones Colbath, this self-proclaimed farm boy changed his name when of age to Henry Wilson. He became a teacher, member of Congress, United States Senator and took office as Vice President under President Ulysses S. Grant March 4, 1873. He suffered a stroke and died in the Vice President’s chambers in the Capitol, November 22, 1875.

Quite a few of the roadside historical markers feature meetinghouses. This one in New Durham is one of the smaller ones. It was built in 1770 and was used as their house of worship and seat of government until 1819 when the town’s first church was built. A short nature trail next to the meetinghouse leads to a paupers’ cemetery and remains of the town pound.

Wolfeboro, which I think of as a stop for Lake Winnipesaukee’s M/V Mt. Washington and as a pretty waterfront town, was once known for harvesting ice. When about a foot of ice had built up on a lake in winter, the ice would be cut with a saw into long strips and then into blocks which could be transported to a well-insulated ice house where the blocks would be separated by layers of sawdust. Stored in this way, the blocks of ice would last until the next winter.  “Natural ice was harvested in the Lakes Region….In 1895, Alonzo Avery set up an ice house near Crescent Lake. In 1913 a warm winter caused an ice shortage in Boston, and ice was shipped from NH by rail. Locally, ice was delivered to family ice chests, businesses, camps, and lake cruisers. Refrigeration technology in the 1930s decreased the need for natural ice. The last family ice business, Moody’s, closed in 1965.”

There are two other historical markers in Wolfeboro. One is at Wentworth State Park which was originally the country estate of John Wentworth, the last royal governor of New Hampshire. His manor house was the earliest summer home in the Lakes Region; Wolfeboro is known now as the Oldest Summer Resort in America. The second is a marker for College Road. “Governor John Wentworth and the King’s Council voted in the spring of 1771 that a highway be made from the Governor’s estate at Wolfeboro to Dartmouth College.”

Tamworth also has three historical markers. One is for “The Barnstormers’ summer playhouse, the oldest in New Hampshire and one of the first in the nation.” Another marker is for The Chocorua Legend. “In several versions, the legend’s sequence relates the mysterious death of Chocorua’s son while in the care of a settler named Campbell. Suspicious of the cause, the Pequawket chieftain took revenge on the settler’s family. Then, in retaliation, Campbell killed Chocorua on the peak of the mountain now bearing the Indian’s name.”

My favorite sign in Tamworth is for the Chinook Kennels which produced sled dogs for explorations, racing, and showing. In addition to the historical marker, there is an Admiral Byrd Memorial which reads “To All Noble Dogs whose lives were given on dog treks during the two expeditions to Little America, Antarctica to further science and discovery 1928-1930 and 1933-1935.” and a memorial plaque in memory of  “A Musher Who Did It All, Richard S Moulton, July 29, 1917 -May 8, 2000.”  As a teenager, he worked at the Chinook Kennels, headquarters for a government-sponsored Antarctica Expedition. He served as senior dog driver on one of Admiral Richard E. Byrd’s expeditions to Antarctica.

There is a marker in Sandwich marking the site of the first house in town but more interesting is the story behind it. Across the street is the property that had belonged to Isaac Adams. He was an unpopular man who had grown up in Sandwich. In 1824 he decided that he would go to Boston to make his fortune. He asked his neighbors to loan him money for his stagecoach fare but no one gave him money. He vowed that he would make a lot of money; he would then return to Sandwich and buy any property he wanted. He worked his way to Boston and four years later made his fortune by inventing a steam press which revolutionized printing.

In 1861 he returned to Sandwich, bought up all the small farms and proceeded to knock them all down. He then built “The Great Wall of Sandwich” which looks a lot like the Great Wall of China. He installed a large statue of Niobe, the Greek mythological figure who was punished by Apollo for excessive pride in her children. People interpreted this to mean that Adams was Apollo and the citizens of Sandwich were Niobe. I think we especially appreciated the beautiful view of the statue and the wall because of our experience walking on the Great Wall of China. When we were in China it was very foggy and we could only see a few feet of the wall.  The wall in Sandwich gave us one more reason to appreciate New Hampshire’s beauty.