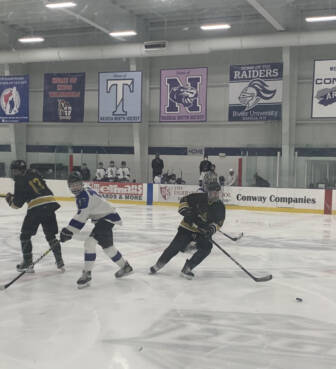 NASHUA, NH — Two-thirds of the way through the 2021-22 season, the only consistent thing about the Manchester Kings hockey team has been its inconsistency.

There have been some convincing wins, which have shown off the Kings’ level of talent and their potential. But there have also been baffling losses, such as the recent 4-0 setback against Pinkerton (4-6-1) or the 6-2 loss to Trinity (4-5-1) earlier in the season. 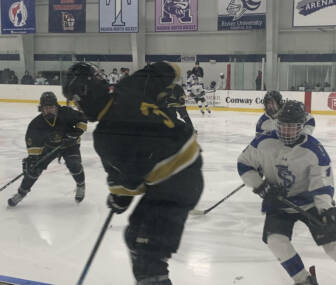 More often than not, the difference in outcome has been connected to the team’s willingness to dig deep and keep grinding, even when things aren’t going smoothly. Saturday afternoon, the Kings kept grinding after a slow start, wore down Nashua South/Pelham, and were able to earn a hard-fought 5-2 win at Conway Arena.

Aiden Kelley had two goals and an assist to lead the offense for Manchester (7-5-0), which has won three of its last four games. Lukas Tate added a pair of third-period goals, as Manchester pulled away late.

“We basically told the guys that they just had to keep digging,” said co-Coach Eric Fischer. “Early in the game, we were just standing around the perimeter, not getting any quality shots. We came out (after that) and started moving, started getting some people in front of the net and making some things happen.” 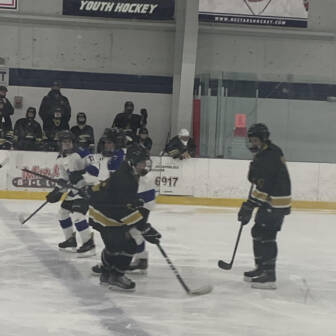 Manchester dominated play throughout the game, outshooting South/Pelham, 39-14. But South/Pelham (1-9-1) refused to go quietly and had the game tied, 2-2, midway through the second period. South/Pelham (also the Kings) took advantage the aggressiveness of the Manchester defensemen and were able to score on a pair of 2-on-1 breakouts.

Both South Pelham goals were scored by Sean McCarthy, including one while shorthanded.

Manchester wasted no time drawing first blood. Kelley scooped up the puck in the neutral zone off the opening draw, deked a defenseman, walked in alone and beat South/Pelham goalie Riley Pelletier to the stick side, just 15 seconds into the game.

Manchester had an excellent chance to extend the lead on the powerplay but Mark Tripp’s shot from the point clanged off the crossbar. 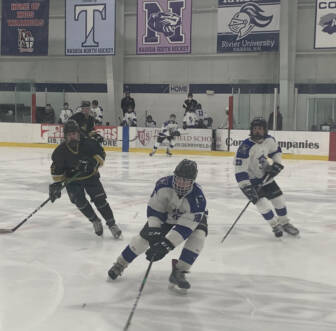 The long rebound from Tripp’s shot triggered a breakout in the other direction and McCarthy didn’t waste the opportunity. He took a pass from Peter Gamache and beat Manchester goalie Landon Wilson (12 saves) for a shorthanded goal at 5:04, to tie the game, 1-1. 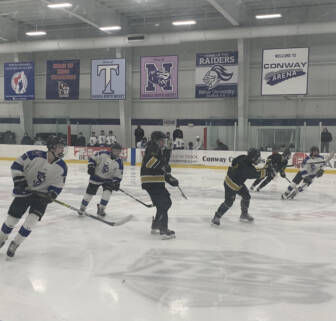 South/Pelham answered early in the second. Once again, it was Gamache and McCarthy on the breakout and once again it was Gamache taking a perfect pass from McCarthy and slipping the puck past Landon, tying the game, 2-2.

Later in the period, with the teams skating 4-on-4 due to matching penalties, Kelley gave Manchester the lead for good. Kelley, who was forechecking aggressively throughout the game, picked the pocket of a South/Pelham defenseman, walked in alone and beat Pelletier to make it 3-2.

South/Pelham tried to rally one more time, coming out flying to start the third. They buzzed the Manchester net and put several shots on net. But Landon was up to the task, making every save, including one gem to rob McCarthy point blank. 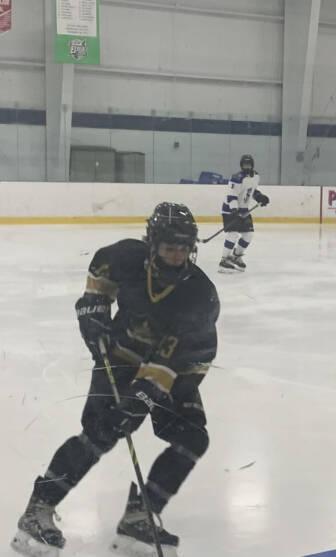 After that initial flurry, South/Pelham seemed to run out of steam. Manchester began tilting the ice to the attack zone, peppering Pelletier with shots. Pelletier turned aside 15 shots in the period, until Tate beat him on a clean breakaway with 3:18 remaining in the game to provide Manchester with a 4-2 cushion. Tate added an empty-netter in the final minute to account for the 5-2 final.

“You can’t fault us on the effort end, but sometimes we get off to a slow start,” said Fischer. “It would be nice to see that third-period effort through the whole game.”

Manchester returns to action Wednesday, when it plays host to Bishop Brady at 4:20 p.m. at the JFK Ice Arena. Manchester will be without defenseman Owen Kelley for that game. Owen Kelley and South/Pelham’s Evan Doughty got into a dustup with South/Pelham’s Evan Doughty, midway through the second period. Both received 5-minute major penalties and “contact to the head” and both received game misconducts. Under NHIAA rules, every game misconduct brings an automatic one-game suspension. 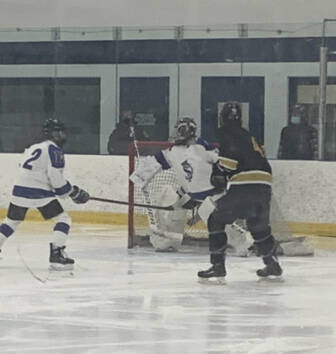