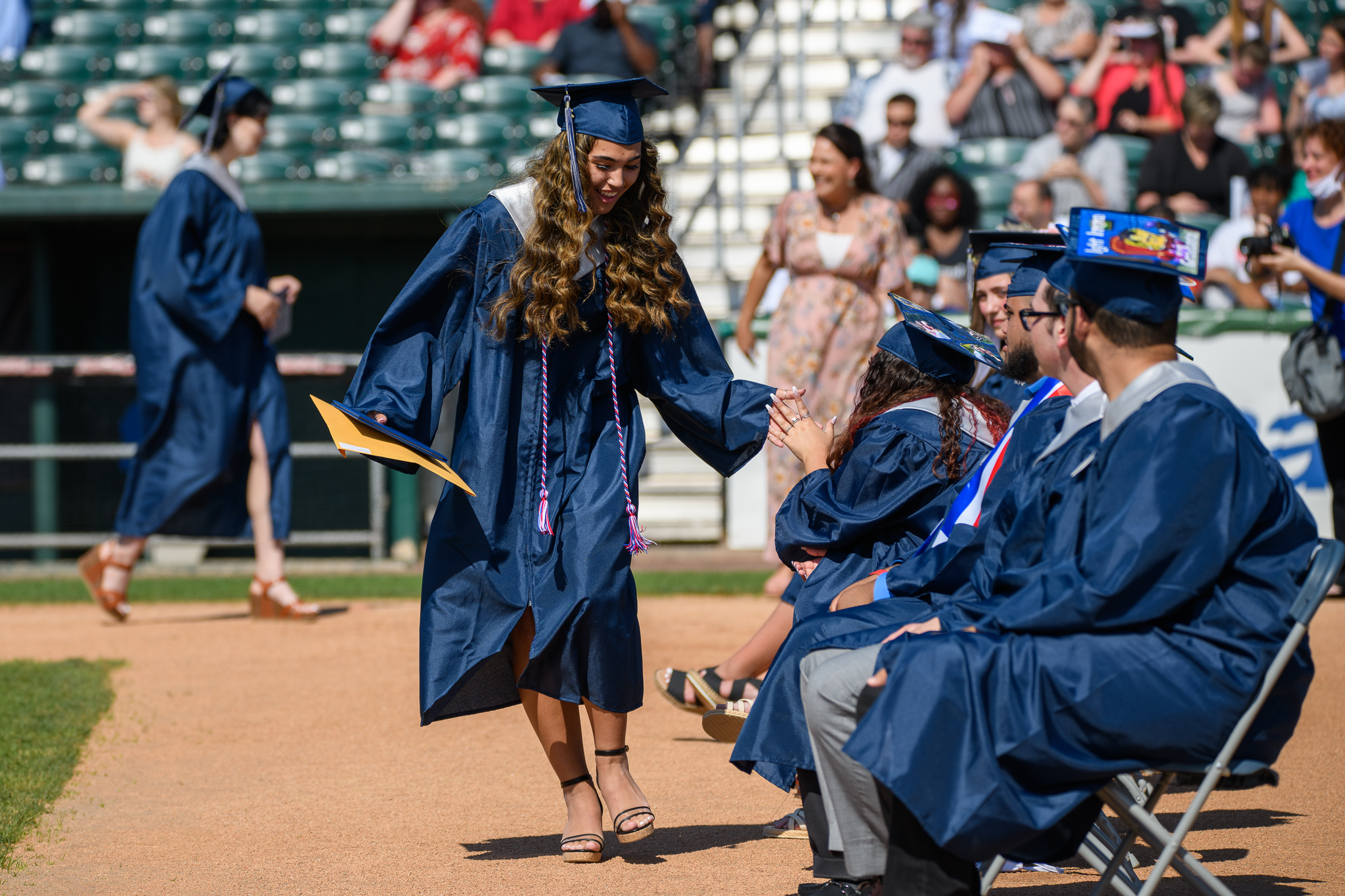 MANCHESTER, NH – It was a bittersweet graduation ceremony for Manchester School of Technology High School’s graduating class of 2021. Sixty-five graduates were recognized for their academic achievements, scholarships and awards, and they said goodbye to their high school years, ready to move on to the next challenge. Meanwhile, Principal Karen Machado is saying goodbye to the school she has led for the past 15 years.

Machado is retiring as the head of Manchester’s career and technical high school effective June 30. She thanked the students for all the years of joy and success. She received a standing ovation from the students, Manchester School Board, Mayor Joyce Craig and Superintendent John Goldhardt.

Machado said she was proud of everything the students accomplished, especially those juniors and seniors who worked through the years affected by the COVID-19 pandemic.

“Even though you have heard too many times that we are all in this together, MST has been that way since our high school opened,” Machado said.

“There was never a dull moment at MST,” Boisvert said.

While the past four years have been tough, Boisvert said, she shared a quote from Nelson Mandela for her fellow graduates to remember during the tough times ahead; “It always seems impossible until it’s done.”

Mayor Craig applauded the graduates for their many accomplishments, some earning awards in state and national competitions such as Skills USA, and certifications in professions such as cosmetology, EMT or firefighting.

“Needless to say you’re an impressive group sitting in front of us,” Craig said.

She told the graduates to be sure to surround themselves with people who have different ideas and beliefs, who will inspire them.

Machado and her husband recently rebuilt her grandparents’ family home in Dracut, Massachusetts, this past winter, which led to her decision to retire, she told Manchester Ink Link after the ceremony.

She intends to do some consulting work after retiring, and helping her successor transition.

Machado served as a health and science teacher at Lawrence High School in Lawrence, Mass., for 16 years and was promoted to an interim administrative position there, which lasted for five years before she jumped at the opportunity to become the principal of MST.

Machado started the job in December 2005, and it was an immediate crash course. She recalls being told on her first day by the former superintendent at the time that she would be required to draft a $10 million renovation plan in three months, during a meeting with other statewide career and technical education (CTE) leaders.

“And they never told me that,” Machado said. “Most schools, they prepare for like two years to get that done.”

But she played along like she already knew about the three-month deadline and got it done.

The renovation took about two years. Soon after it was completed, Machado recalls former Superintendent Tom Brennan and former Mayor Ted Gatsas approaching her about restructuring the CTE facility into a full high school. This time her deadline was six months.

Now, MST is a school within a school, as Machado describes it. There is a full high school which offers CTE and other required curriculum via competency-based education (CBE), but they still offer standalone CTE courses to students from across the district as well as neighboring communities.

Machado said it will be difficult finding a principal who has experience in both CTE and CBE, but that’s what the district will need.“

Usually, they know one or the other, but never both,” Machado said.

The first cohort of high school students who spent all four years at MST graduated in 2016.

At its start, the high school required the involuntary transfer of six teachers from other district schools. Now, teachers transfer to MST voluntarily, Machado says, because they like how the programs are structured. And CTE teachers come from various industry sectors to share their breadth of knowledge and experience.

The school generally sees about 100 students enrolled each year, Machado says. Next year is expected to be packed to capacity with about 145 students currently enrolled, she said. She thinks there has been a shift in the way parents and students view education and a growing demand for more project-based learning, with more hands-on experience and unleveled classes.

The school requires students to achieve a 3.0 grade point average in order to graduate. Some students exceed the minimum CTE programming and are named Excelsiors by completing three years of CTE. Nine students accelerated their learning and completed all the requirements to graduate in only three years.