MANCHESTER, NH – A five-sentence pitch to recruit police officers, posted Tuesday on the Manchester Police Department’s Facebook page, was removed hours later by the police chief after it caused a brouhaha on social media because it described “qualified immunity” as a unique benefit offered by the department.

“Qualified immunity” should not have been included in the post, he said Wednesday after a meeting of the police commission.  It was posted by mistake, he said, and the individual responsible for it will not face discipline. 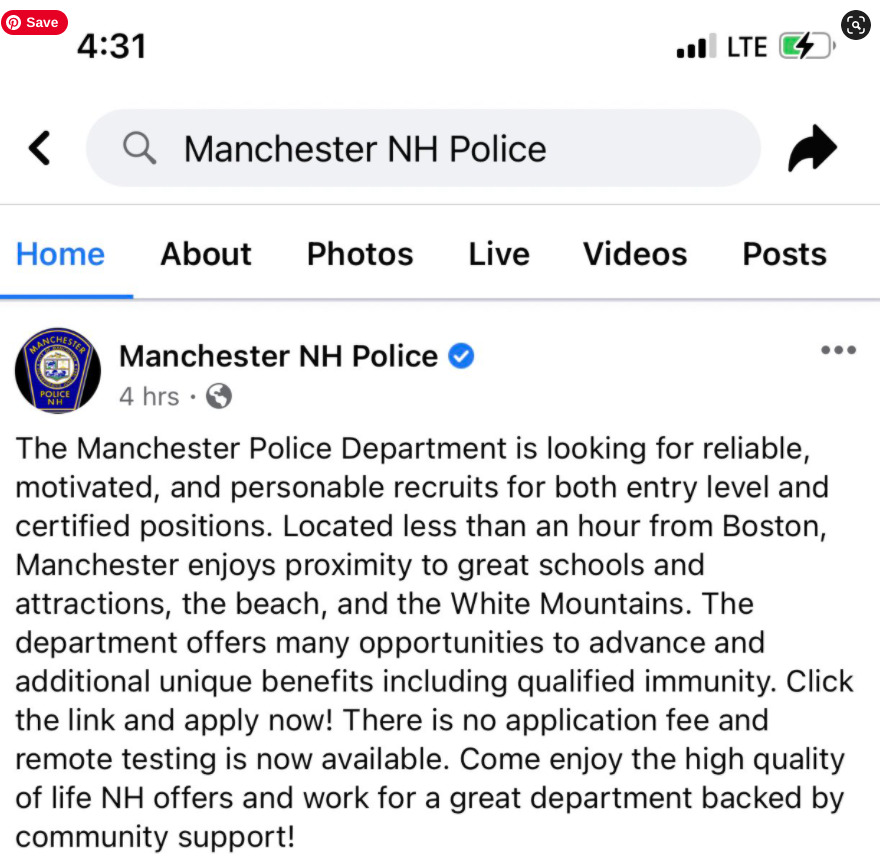 “The Manchester Police Department is looking for reliable, motivated, and personable recruits  for both entry level and certified positions. Located less than an hour from Boston, Manchester enjoys proximity to great schools and attractions, the beach, and the White Mountains. The department offers many opportunities to advance and additional unique benefits including qualified immunity. Click the link and apply now! There is no application fee and remote testing is now available. Come and enjoy the high quality of life NH offers and work for a great department backed by community support.”

“The Manchester Police Department just called qualified immunity, a doctrine that is an enemy of accountability, a “unique benefit,” she tweeted on Tuesday.  “Apparently citing that you have protection when you abuse your power is a good way to recruit!  Anyways, abolish that shit.”

Aldenberg notified the public via Facebook later on Tuesday that the posting was removed and appropriately archived.

As Chief of Police I take full responsibility for this post and the inappropriate mention of qualified immunity.”

Qualified immunity is a complicated subject.   It is a defense, created by the Supreme Court, that shields police and other government officials from liability unless they violated “clearly established law.”

Aldenberg said recruiting and qualified immunity are two separate subjects that should not have blended together.

He acknowledged that the post resulted in much criticism from the public and stressed qualified immunity is not a benefit.

“That’s people’s perspectives on qualified immunity and I respect that,”  he said of the criticism.

He explained that the measure in place to review and screen posts and news releases before they are made public “broke down for a short time yesterday (Tuesday) and unfortunately it broke down in a significant manner.”

He said, however, that there is a correlation between qualified immunity and retention.

Many chiefs across the country have been very vocal about the importance of qualified immunity he said.

He said the Manchester Police Department has a track record of taking appropriate action in cases where an officer acted inappropriately, violated a law or policy, including termination.

Still, he said the discussion of qualified immunity is important to us.

“I’ve said this publicly and so has the chiefs association, if you take away qualified immunity from police that will cause people in the profession to say, “Wait a minute.  Do I really need to be in this precarious position where my protections are getting less and less if I act appropriately,” he said.


In April, the New Hampshire House of Representatives voted 184-178 to kill legislation that would have eliminated qualified immunity as a defense in lawsuits against police officers, as well as other public officials,  pertaining to violation of constitutional rights.

This year, New Mexico became the first state to eliminate it as a defense.  New York City also became the first major city to ban qualified immunity for police officers “to allow victims the opportunity to seek justice,” according to Forbes magazine.