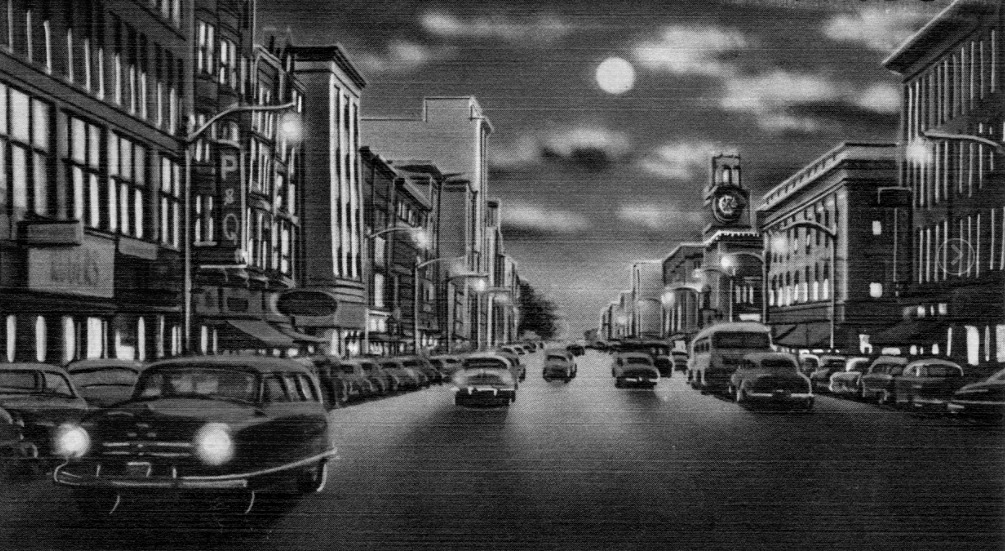 I recently poked an eye out from under a pile of rusty poems to stare down the spine of the Queen City, our beloved Elm Street.

She looked a mess.

It was dark of course.  Long past dark in fact.  And roaring she was, seething in spots, the street some twenty blocks long by my sight. Manic faces were everywhere, pinched and torqued and sloppy to the touch, each of them — of us — gushing at midnight as if we’ve never seen a blood moon before.

I sniffed at something foul in the air from inside the bar.  A simmering rage was building down the street. My ears pricked up, my nose reached like an ant-eater, my eyes turned to magnets.  There was a nervous energy soaking the foundation from the Pint to Penuches.  Trouble was brewing close.  I could smell it.

Mi amigo, Large Larry, was on my hip, wanting to dip outside for a bit, talk some smack,  light a stub, brag about his girth…again.

“I understand, Larry.” I tell him every week.  “You have a generous belly.  The world’s most stretchable skin.  A wrecking ball would turn to dust against that girth.”

But recollections of the “old days” on Elm Street in the 1990s started rattling my mental cage, getting up in my cool space, when all I wanted to do was lick at my pint of mud and talk speed metal with Large Larry.  I didn’t want to think back on all those violent breakouts I had seen back when downtown was crumbling in plain sight.

I remember witnessing some gruesome battles in those days, not the kind of fights you would call “club brawls,” where the tap and run was where it started and ended. No, I’m talking about some real skull-crushing, boot-licking, curb-ending battle royals.  And they always turned this snowflake’s insides weary.

Larry and I got off our stools, slid sideways past a couple toughs and the scent got stronger as we made for the door.  Two steps outside and Elm Street was moaning, begging us to go back inside, back to our blather and rants and bets on longevity.  Too late.  It was on.

Faces whipped to the right and left, then traveled like spring ice down the Kancamagus toward the noise.  Some of the smarter nightcrawlers were holding back, doing the right thing, gripping their dates at the waist, almost thanking the rampage for unfolding.  Whatever it takes, right?

Some of the more tanked-up crawlers, remembering back to that crucial set they did at the gym earlier in the week when their veins were kicking and the sleeves were missing, started getting “above their raisin,” shouting to be seen, playing the game much differently than the guys on dates.  They were about to go full-throttle showtime.   Midnight tends to make people do stupid shit.

Not twenty yards down the road, it looked like the Wanderers were going at it with the Outsiders who were busy fending off the gang from the Sopranos.  It was an utter disaster!  I haven’t seen a fight like this since I was holed up with my Melroseians on 99 in Malden, circa ’88.  A medieval, sickening display of mankind was on display.  Seemingly hundreds of punches being thrown by dozens of people at once.  Maybe it was four people, maybe it was ten.  Whatever it was, it was Danger Zone 2.0.

Not being on a date, other than with my padre, Large Larry, we slowly rolled towards the frontlines, hanging back just enough to see the “Boom!” and “Pow!”  Then I heard it. We all heard it — a head free-falling unconscious, smashing against the concrete.  I heard it, I hear it today, I hear it as I type.   My skin turns to chicken if I think about it too long.

That was enough for me.  Night over!   Well, almost.  I needed to unwind my nerves with some more mud.  I needed to find out if this violence that was starting to seep into our dearest thoroughfare was just a passing phase or something that needs to be dealt with harshly and quickly.  So, we went to the Rover.

Large Larry,  having a more West Side upbringing compared to my Candyland raising, didn’t seem much phased by the brawl.  He was busy in the corner, asking people to take a punch at his rock island stomach as he balanced a smoke between his lip and nose.  No takers.  Go Larry.

I was pouring over in my head the dinnertime shooting downtown just a couple weeks ago in front of USA Chicken and Biscuit.  That was pretty brazen, pretty terrifying.

There was the cyclist that supposedly blew off a traffic signal on Elm last week and barreled over and killed someone’s father, someone’s husband, someone’s son, someone’s dear friend.   That’s disgusting on multiple levels.

Then the hostage situation at Tru.  The shooting at DraftKings.  And, I am sure there’s been dozens of reported and unreported incidents as well.

It is a city after all.

With a slow hand, I pulled aside one of the biggest, baddest, most loved bouncers in the city, Ramone. I asked him what gives, what’s with all this tragedy going on downtown.  Ramone, a man who has seen it all,  laid it out short and sweet:  “Entitlement.  People just feel entitled.”

The right to kill, the right to hurt, the right to ruin lives.  And for what?  Bravado?  Some dying relationship?  Too beat a traffic light?  Cold cash?  Who knows.

But a toxic environment downtown is what we need to avoid, what we need not relive.  Whether it fits your narrative or not,  Manchester is booming and will not be overrun by mayhem.  Not this time around.  Businesses, soon enough, will be thriving as they were pre-pandemic.  Bet the house on it.  Hotels are going up everywhere.  Help Wanted signs are posted on nearly every corner.  Business owners are taking risks, merging with other businesses,  doubling up on opportunity.

And Manchester has come way too far to be swallowed up again by some entitled jerk-offs looking to poison Elm Street’s bloodline.