MANCHESTER, NH – Manchester-area hoop-players will compete in a first-of-its-kind streetball basketball tournament and cultural event that promises a little bit of fun for every denizen of The Queen City.

The event is free to the public.

Carl Doucet, who heads the MBA, which was established in 2011 as a place for Manchester-area residents to play basketball that is “competitive, fun and affordable,” said the location holds a special meaning.

“Back in the ’90s, Pine Street was the place to play [outdoor basketball],” said Doucet, 47, of Manchester. “Sometimes you would have to wait three games just to get on the court. It’s significant that we’re playing there.”

Doucet added that the “foundations of basketball” in the city stem from outside streetball.

The concept for the event began—as many Manchester cultural events in the city—inside Azevedo’s mind on his daily drive downtown. “I always pass those courts on Bridge Street and Pine Street,” he said. “I love Pulaski Park, and it has always been lovely, and when the city [thanks to The Kiwanis Club] did the basketball court over, the park just blew wide open.”

Azevedo said he then started musing on the idea of the city hosting an “old school basketball tournament” played “in the heat of summer” where they could open the park to food trucks and musicians and artists, as well as the athletes competing.

Doucet and Azevedo joined forces—with the assistance of Mayor Joyce Craig—to organize the event where all proceeds will be donated to Families in Transition in Manchester, a non-profit whose goal is to “ensure that people have the seamless support that they need to find and maintain a home long-term community,” according to the Families in Transition website.

“We need more community events in Manchester,” said Doucet. “We need more recreational activities that people can be a part of.”

Mayor Craig agrees. “I believe our community is our best asset, and this is a great example of community members stepping up and organizing an event to bring us all together to have fun,” she wrote in an email. 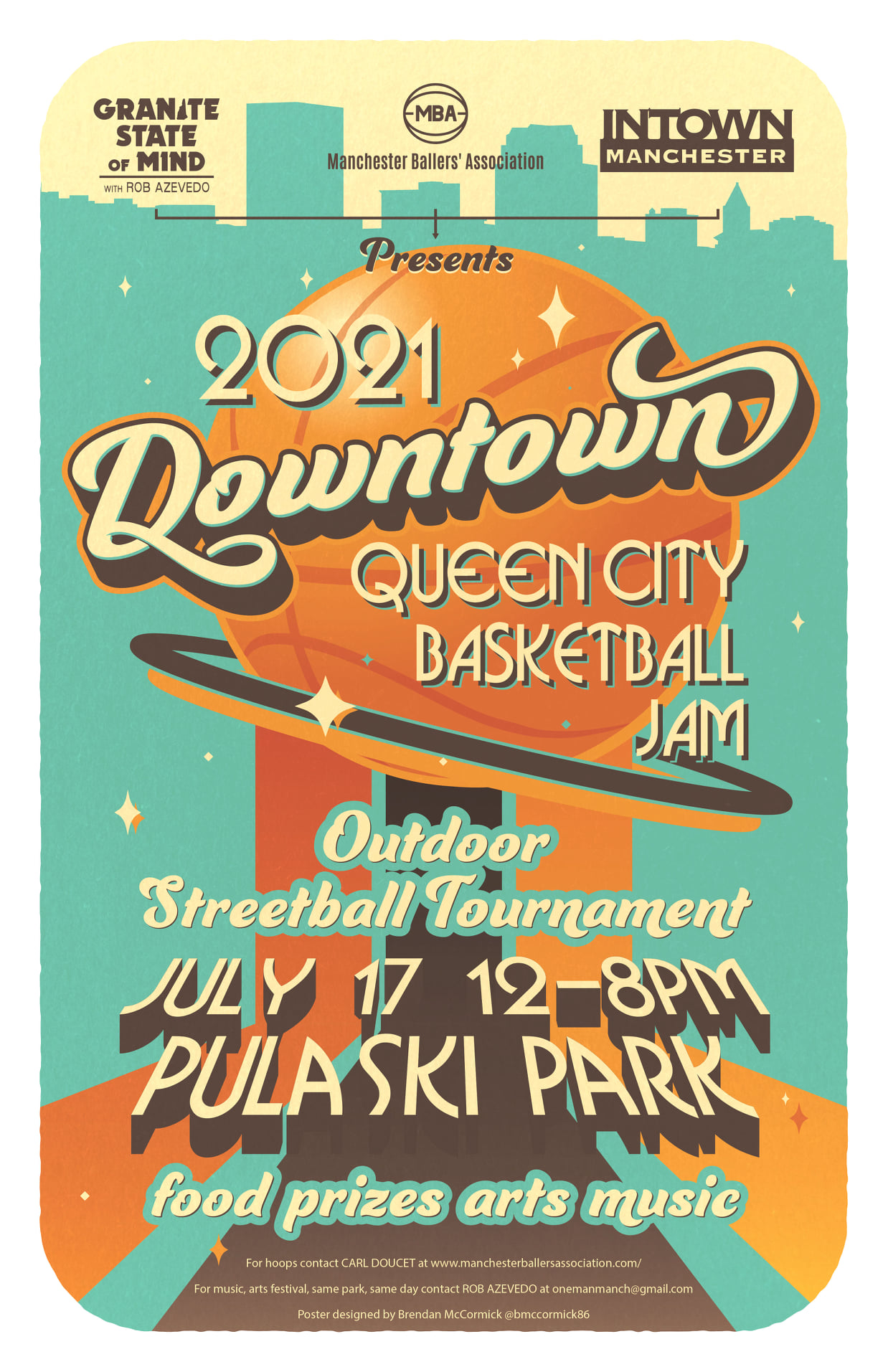 The single-elimination streetball tournament on July 17 will include eight teams with some of the city’s most elite ballers, many of whom have experience playing college hoops and compete weekly through games organized by the MBA. Doucet said that fans looking for good basketball to watch will find it at The Downtown Queen City Basketball Jam.

“I’m using basketball to bring the community together,” Doucet said. “I’m trying to make a difference and bring the city together.”

And the community has answered the call through its sponsorships and donations.

In addition to the basketball tournament, the day will include music and food at Pulaski Park.

Grant Lampton will host an open-mic for musicians from 2-4 p.m. then DJ Reklss will take over the tunes from 4:30 p.m. until the end of the event.

The Russian Dumpling food truck will also be on site with Ben and Jerry’s Ice Cream offering desserts later in the day, said Azevedo.

Intown Manchester will also run a kids’ area for the younger attendees.

Other donators include Ward Law, Kurt Wick’s All-State Insurance, Bangor Savings Bank and Hop Knot. Additionally, Farm and Flower will be donating fruit with the SEE Science Center donating passes to their exhibits.

Azevedo said that Mayor Craig has been instrumental in her support organizing the event.

“Mayor Craig is outstanding,” said Azevedo. “She gets it. She loves the city like many of us do. Most importantly, she possesses empathy. You can’t say you care about a city unless you care about everyone in the city. She does.”

For Doucet, “community” remains in the front and center of The Downtown Queen City Basketball Jam. “Recreation is a tool for community,” he said.

Mayor Craig added that after a long year battling the pandemic, the event is a chance for the Manchester community “to gather, reconnect, and enjoy our beautiful city park and recreational area.”