MANCHESTER, NH – A rain-swollen Merrimack River swept through a homeless camp, submerging tents pitched along the boat dock and leaving one person stranded downstream in need of rescue.

According to Manchester Fire District Chief Andy Parent police called on them at about 9:30 a.m. on Dec. 2 to report the river had risen and tents were floating in the river, with people possibly also in the water.

“We dispatched a boat response and on arrival we found at least three tents halfway submerged in the water, so we deployed two guys in water rescue suits tethered to lines and they walked out to the tents to double-check that no one was in there,” Parent said.

Rescuers sent a boat further downstream to the peninsula after one man was found to be stranded there. He was brought to shore safely.

In all there were about 15 tents along the boat launch Parent said, but only three were submerged. There were four more tents pitched on the peninsula, but only one person was in need of rescue.

“Some of the residents down there explained it started rising last night so some people self-evacuated last night before we were dispatched,” Parent said. Many personal belongings, coolers, trash, and debris were left in the water due to the surge.

Heavy rain in Manchester brought between 1½ to 2 inches of water to the area, which caused the quick rise in the river’s water level, which is measured by cubic feet per second, as you can see in the graphic below. 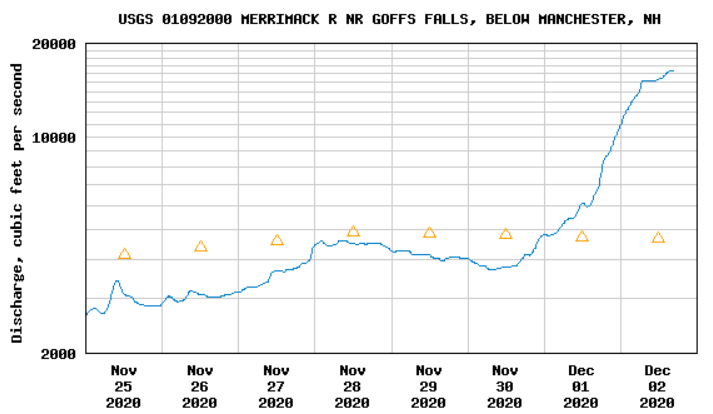