This is a tale of raw stupidity. So, with that, I’ll get right into it.

Because I’m a Bruce Springsteen cultist, I decided a few years back to leave the sweet bosom of New Hampshire for one day only and hit the Jersey Shore. Out of that fever and a well-developed hunch-meter hatched over 30-years of tailing Mr. Springsteen, I rallied a buddy from Manchester and my brother for an all-out road trip to Asbury Park, New Jersey in search of The Boss.

I’m 46 now and should be embarrassed (I’m not) that I would still go through such lengths to track the 66-year-old songwriter down on an off-night near his home, where Bruce might pop into a bar for a drink and end up playing with the house band for an hour and half.

It does happen. I’ve witnessed it.

To me, Springsteen is that long-lasting impression that grabbed hold of me at age 15 and still won’t let up on my fat neck. I really don’t know how I’d answer if someone offered me 30 minutes of face time with either Bruce or Jesus. I’d likely extend my hand to the bearded savior and say, “Well, I really do hope I get to see you again someday.”

When we reached Asbury Park the atmosphere on the boardwalk only solidified my boss intuitiveness. I could feel it, smell it. He was out there somewhere. Our decision to abandon the Granite State for one day was dead on. The Wild Rover will be there tomorrow, we said, as will our wives, children and work.

The night was falling into place. Alejandro Escovedo, a terrific rocker from Austin, Texas, was booked to play the Stone Pony that night. Escovedo, who was out supporting his 2010 ‘Street Songs of Love’ album, is worth the five-hour trek to see play all by himself. He’s a slick dresser, great writer with a voice and style all his own.

Escovedo and Mr. Bruce, who lives just up the road in Monmouth County, had collaborated on a few songs during those years, and my gut said Bruce would be showing up at the Pony this night — late probably, almost at closing — and rip a few gems out with his buddy Alejandro.

The night progressed. Lots of hopeful chatter about possibility and chance took place. In-and-out of the Pony we walked throughout Alejandro’s set. I needed to taste that ocean air, to stare long and hard down the Jersey boardwalk to complete the experience.

The body language on the doorman outside the Pony showed acceptance towards us, almost as if he knew why were were there, and, without inquiring, nor caring, he let us come and go.

“Just show the wristbands when you come back in,” he said a few times.

Oh, Escovedo was killing it inside the small club. We were maybe 20 feet from the famed stage, hurling them back, watching the skinny Texan do his thing. The energy was swallowing the crowd up. And everyone was feeling what we were feeling.

Escovedo played a couple more song. It’s was late in the evening and the beer was starting to taste tighter on the tongue. My buddy and me decide to step outside for some more “fresh air.” One last time. Then let the God’s take over.

I shouted to my pal standing near the sea wall.

He tapped out, we turned around, both wrists up, respecting bar law and headed into to see Bruce up close. But then a new face appeared before us at the door, something broken and loveless and thick with hate.

“No one’s coming in,” the monster informed us. “Not happening, guys.”

“But I got the wristband, man!” I cried, posed as Wonder Woman.

Somewhere a father drops an easy homerun ball in front of his son. A bride faints at the alter. A heart stops beating. With little pride, I bribed the doorman with my 1999 Hyundai.

“No thanks,” he said with a gross grin.

Inside, the club began to swell, I could feel it, taste it, that power behind the applause, the unleashing of raw allegiance to one Man and his craft. I was blown backward by the reverberations coming from inside the Pony. Bruce was now onstage! The crowd was losing its mind, shouting, “Bruuuuuuce!”

I begged onto the beast, “I came all the way down from New Hampshire! Please! Please!”

Half-hour later, around the time Bruce and Alejandro were tearing into a cover of the Rolling Stones “Beast of Burden,” I’m face down in my pillow at the hotel, dejected as if I just got a DWI. I prayed to be mind-swept. I tried to shower. Tried to eat myself to sleep. Nothing worked. It was an unfathomable brain fart, worthy of a thousand bee stings.

But, I suppose, that’s what I get for leaving New Hampshire. Never do that again. 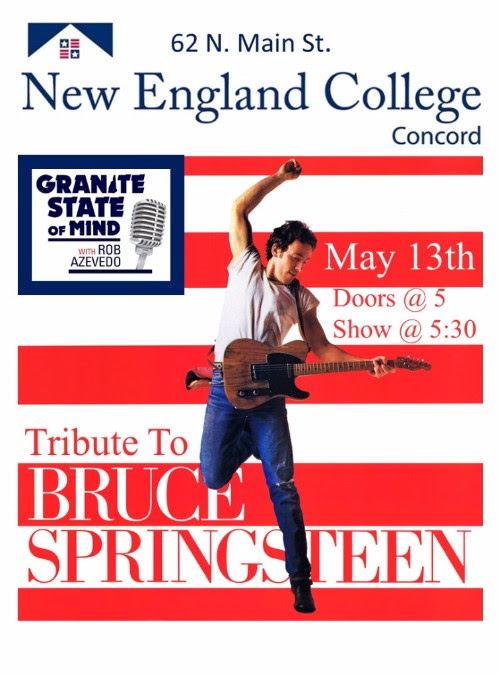 Kim Riley – Born To Run, Growing Up, and Because The Night

Steve Lamb – Thunder Road, Darkness On The Edge Of Town, and The River

Keith Sanders – Dancing In The Dark

Erik Ray – Racing In The Streets

Rob Azevedo hosts Granite State of Mind on Friday nights at 9 p.m. on WMNH 95.3 FM. He can be reached at onemanmanch@gmail.com