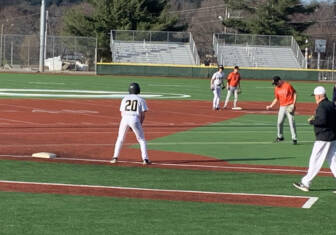 Three games into their fledgling season, the Central-West co-op baseball team is unbeaten and starting to look like genuine contenders in Division 1.

On Friday, the Knights got timely hitting, outstanding defense and a complete-game effort from starting pitcher Griffin Logue, en route to an 8-2 win over Keene High, at Gill Stadium.

Logue struck out seven, walked two and hit a batter. He allowed eight hits but managed to work his way out of jams on multiple occasions. Keene stranded eight base runners, as Logue was able to come up with the big pitch when he needed it.

“It’s our second complete game by a pitcher this week,” said Central-West co-head coach Ernie Yerrington. “(Logue) hit his spots, the defense was clean, we put the barrel to the ball, had good aggressive baserunning. You can’t ask for anything more.”

Central-West pounded out 14 hits against three Keene pitchers. All nine Knights’ starters reached base safely at least once, eight had hits and five drove in runs as part of a balanced offensive attack.

“Up and down the lineup, there really isn’t a hole,” said Knights’ co-head coach Dan Colburn. “Everybody hits the ball hard and that’s what we preach.”

“I think there might have just been one swing (today) at a low ball,” said Yerrington. “Other than that, good pitch selection, being patient, letting the ball come to them.” 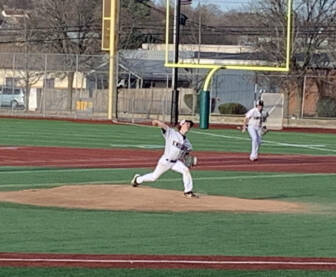 Central-West broke open a tight game with five runs in the bottom of the sixth inning. No. 9 hitter Logan Tartsa (2-for-2, HBP) started the rally with a one-out single to left off reliever Owen Avialotis. A walk to Jacob Plamandon and a single by Nolan Duval loaded the bases for Jake Vachon (2-for-3, BB), who ripped a two-run single up the middle to make it 5-2.

Cleanup hitter Declan Ryan kept the rally rolling with an RBI double the gap in right-center off Will Frowein. Pinch-runner Wilson Zolla would score on a wild pitch and David Schuff tacked on an RBI single to push the lead to 8-2.

As well as Logue pitched, it looked like he might not survive the second inning. Keene (0-3) loaded the bases with nobody out, after Logue hit a batter, followed by singles from Jake Riendeau and Ian Bergeron. Sharik Khan followed with a sharp RBI single to left, giving the Blackbirds a 1-0 lead and keeping the bases loaded.

With his back against the wall, Logue dug deep and fought out of trouble. He struck out Tanner Payne on a fastball, then got hitter leadoff Jared Schmitt waving at a nasty curve for the second out. Logue escaped the jam by getting Brock Haynes to ground out to Ty Chrabolowski at third to end the inning. 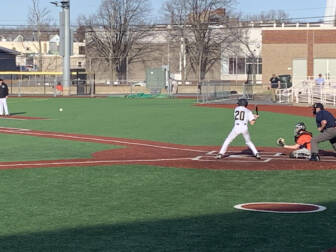 Central-West tied the game in the home half of the second. Travis Graf crushed a one-out triple to dead center field, then scored on an infield single by Logue.

The Knights took the lead for good in the third. Chrabolowski drilled a two-run triple to right-center, scoring Vachon and Matt Labrecque, to make it 3-1.

The defense for Central-West was outstanding, as it has been throughout the young season. Leading off the top of the fourth, Keene’s Riendeau lofted a pop fly to shallow centerfield that appeared destined to be a bloop single. But Graf went racing back from his second base position and made a diving catch to rob Riendeau of a hit. It also wound up saving a run, as the next hitter, Bergeron, launched a triple to deep left. Logue slammed the door with back-to-back strikeouts.

Keene cut the Central-West lead to 3-2 with a run in the fifth on an RBI single by Haynes and looked poised to tie the game in the sixth. But with one out, Bergeron tried to score from third on a ground ball to first but was gunned down at the plate on a perfect throw from first baseman Declan Ryan to catcher David Hood.

“So far, in our games, (the defense) has been really clean,” said Colburn. The kids have been working hard. Yesterday, in practice, we did a lot of those kinds of drills. They pride themselves on good, clean defense. It seems to be paying off.”

Central-West will be back in action Monday, on the road at Concord High. First pitch is scheduled for 4 p.m.