MANCHESTER, NH – New Hampshire has done it again! The National Association of Letter Carriers, New Hampshire Merged Branch 44, covering 22 cities and towns in the Granite State, has finished in first place for their newsletter “The 44 Magnum.” The honor was announced recently at the NALC National Convention in Detroit. 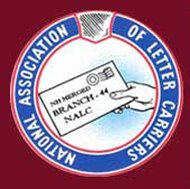 President Dan Yianakopolos stated, “This is a collective effort of some very hard-working letter carriers. They submit relevant articles, cartoons and feature stories. We have a very talented staff and they can compete with anyone in the country, this award shows that.”