It doesn’t happen often anymore, especially since I’ve stepped knee-deep into middle-age and have attempted to present the veneer of a responsible adult.

But it still happens, a couple of times a year—a primal need that occurs on a cellular level. There are no harbingers that foreshadow its arrival; rather it comes on like a sudden fever, a need for the full-throated roar[1] of electric guitars and the visceral thump of drums.

I’m talking about letting the Led out, a full day filled with sundry substances and the music of the legendary rock band Led Zeppelin cranked up real loud.

While I’m a 46-year-old man with a wife and kids and a professional job, there’s something about Zeppelin’s music that summons my inner-adolescent boy, the kid with the shaggy mullet, acne and an entire wardrobe consisting of acid-washed jeans and concert T-shirts.[2]

Perhaps it’s the libidinous and not-so-subtle nature of many of Zeppelin’s lyrics[3]—they’re either about sex or tracking down hobbits—that speak specifically to the teenage male struggling to get laid and looking for guidance from the veritable Jedi-masters of groupie sex.

My Led Zeppelin-experience, however, began even earlier, in my pre-adolescence in the mid-80s when my father introduced me to Led Zeppelin IV,[4] which contained many of the band’s most commercially successful songs, including “Rock N’ Roll,” “Black Dog,” “Going to California” and, of course, “Stairway to Heaven.”

From the second the needle touched the vinyl, I was hooked.

My interest in Led Zeppelin blossomed into a full obsession by the time I was in high school. I bought every one of Zeppelin’s albums on cassette tape—I even owned Coda, which was basically a bunch of outtakes they released after John Bonham’s death to fulfill a record contract. Later, I purchased their first box-set on CD, which was life-altering at the time. 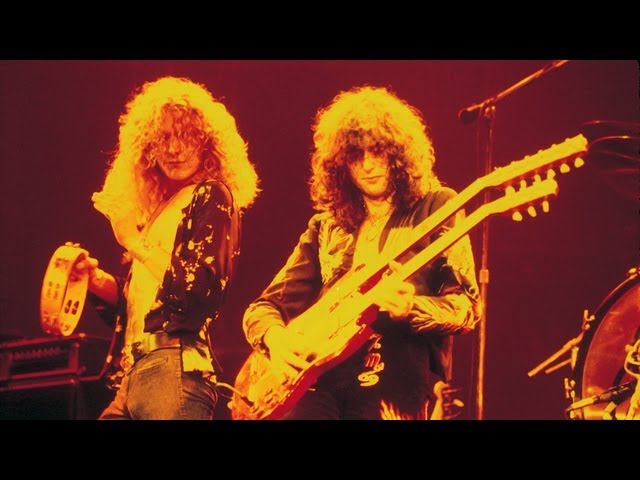 My childhood bedroom was a shrine to the band—the walls plastered with posters and pictures—and I even picked up an electric guitar and a book of Led Zeppelin tablature, which I played, albeit poorly, whenever I wasn’t listening to their music.

This is to say nothing of my VHS version of the movie The Song Remains the Same, which combined concert footage from three Madison Square Garden shows in 1973 with these strange vignettes[5] where Robert Plant wore an animal’s fur draped over his shoulders and carried a sword and saved a princess, while Jimmy Page—for no apparent reason—climbed a hill in the dark to find a bearded man holding a lantern[6]. I would watch the movie weekly, wearing out the VCR.

As I entered into adulthood,[7] my Led Zeppelin infatuation waned, and now I’ll mostly listen to their music on classic rock radio stations, where an alien visiting Planet Earth and tuning into said stations might believe that there were only three or four rock n’ roll bands[8] and a dozen albums recorded between the years of 1965 and 1995, the most prominent being Zeppelin.

I’ve also had to resolve myself to the vast plagiarism accusations against Led Zeppelin that are not entirely false. Zeppelin’s debut was basically a cover album, and the band never had qualms with songs “inspired” by deceased blues artist like Robert Johnson, Willie Dixon, Howlin’ Wolf and Muddy Waters,[9] sometimes without probably crediting the original musicians.

But “hey, hey, what can I do?” I still love the music. And as far as the rock and roll riff, the thundering drums and piercing vocals are concerned, no one did it better than Led Zeppelin.

So these days, when I wake with the innate need to let the Led out and resurrect Teenage Me, I allow nature to take its proper course.

Besides, it’s far better than being constipated with most of the crap that passes for popular music these days.

[1] I’m fairly certain I stole that phrase from a TC Boyle short story.

[2] The truth is that—minus the acid wash—this still comprises the vast majority of my leisure-wear.

[3] Take “The Lemon Song” where Robert Plant sings of “squeezing [his] lemon until the juice runs down [his] leg” or “Black Dog” where he eschews the metaphor and makes his point directly: “Hey, hey, mama, said the way you move, gonna make you sweat, gonna make you groove.”

[4] While the band intended for the album to be untitled, most fans refer to it either as Led Zeppelin IV, Zoso or Ruins.

[5] If you haven’t seen the movie, imagine Lord of the Rings on LSD with Led Zeppelin doing the soundtrack.

[6] The exception was John Bonham’s bit—John Paul Jones had a cryptic thing with “No Quarter” and an organ solo—where Bonzo drove race cars while playing “Moby Dick,” which is admittedly pretty cool.

[7] This is a dubious assertion.

[9] This is not to mention that “Babe, I’m Gonna to Leave You” and “Stairway to Heaven” were also involved in litigation. The song “Taurus” by a band called Spirit that Jimmy Page allegedly ripped off in “Stairway” is, admittedly, very similar, although the lawsuit has been put to rest and Zeppelin was exonerated.