MANCHESTER, NH — At half-past six on a quiet Thursday night in the beginning of March, representatives from a group called Progressive Manchester NH assembled at the Unitarian Universalist Church on Union Street for a unique event. Lawyers had come to volunteer their time in the evening to inform the general public about what rights tenants and landlords have under both federal and state law. About 50-60 people attended.

Elliott Berry and Steven Tower are both attorneys who work for New Hampshire Legal Assistance (NHLA) located at 1361 Elm St, in Suite 307. Mr. Berry is a kind old man who wore a suit and tie to go with a white beard and a pair of glasses which made him look just as intelligent as he is. Mr. Tower is a younger man who arrived in casual clothes but who was nonetheless knowledgeable about tenant law to the point of being an expert. They were both kind, patient, and exhibited a tirelessness one does not often see in people volunteering their time for the benefit of the community.

They provide legal assistance to low-income clients, among whom are homeless people and people about to become homeless. Half of Manchester’s population — roughly 55,000 people —  are renting their living space from a landlord. Half of those, Mr. Berry claims, do not have a written agreement in the form of a lease.

Landlords, who themselves may not be aware of the limitations placed upon them by law, sometimes make decisions which require a legal remedy. Among these are: locking a tenant out of their apartment, refusing to address a significant issue within the apartment, throwing out or withholding a tenant’s property from them, or providing a shorter notice than is legally required for a tenant to move out.

Rooming houses were a particular concern. Low-income people, often unable to afford anything else, must either accept what living space they can find or be homeless. This often means living in a rooming house. Residents in New Hampshire are only considered tenants if they reside in a rooming house for 90 days. Previously, property owners would move residents around before this 90-day period ended; residents in a rooming house were required to stay in the same room for a 90-day period in order to be legally considered a tenant and to have legal rights as such. Landlords who moved residents around this way gave themselves carte blanche to do whatever they pleased to the people paying them rent. They could skirt the law. A resident had no legal recourse if anything happened to them.

However, the law changed to say that a resident in a rooming house would be considered a tenant if they stayed within a property owned by the same company that owned the resident’s first room. Most often, because rooming houses are not properly permitted, city welfare is unable to help residents who live there. As a result, someone can become homeless if they lose a source of income and can’t find any other alternative. Rent assistance agencies in Manchester are few and far between.

After a resident’s first 180 days of residency, property owners of rooming houses are no longer required to pay the Rooms and Meals Tax resulting from that person living there. 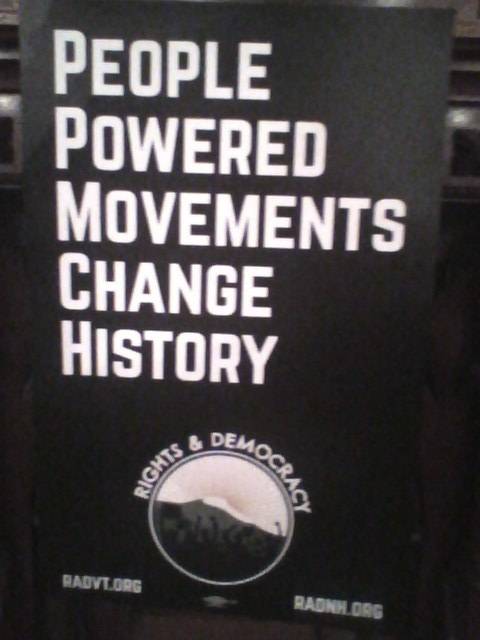 According to both lawyers, landlords have sometimes been known to say that they want to renovate the living space in which a tenant resides. The tenant is then required to vacate the property. This may be true, or it may be an excuse to get a tenant out the door. Proving that a landlord said they would renovate and is not doing so is a difficult endeavor.

Evictions are not legally allowable as a method of retaliation against a tenant who has good faith complaint to a third-party agency, such as concerns with the condition of the property or an infestation in it. Nor can rent be raised in retaliation of a good faith complaint. If a landlord attempts to do either of these things, a court hearing can be sought in order to rectify the situation.

Conversely, a landlord can start the process of eviction for legal reasons — the most common of which is non-payment of rent. While rent can be withheld for good reason (here the lawyers strongly suggested retaining counsel while doing so), it cannot be withheld if the tenant just forgets or doesn’t feel like it. By inhabiting the property, they must continue paying an agreed-upon amount of rent on a weekly or monthly basis.

In this instance, a landlord can serve a tenant with a written document called a demand for rent. They are entitled to assess a $15 fine against the tenant for liquidated damages, which is a way of charging a person money for not having money. Even if the tenant resolves a situation like this three times within 12 months, on the fourth such occasion, the landlord can evict the tenant anyway regardless of whether money owed is paid on time or not.

As a general rule, landlords can charge however much they want in rent. They can charge residents extra for pets. Red Oak in Manchester assesses a monthly fee for each pet on the property. Other landlords prohibit pets entirely. While landlords are prohibited by law from doing either of these things to residents who have a service animal or emotional support animal, they often do so anyway, landing them in legal trouble.

Additionally, stories abounded at the event of landlords who were responsible for utilities but who turned them off during the day or left them so low as to be ineffective, as is the case with gas heating. Tenants have the option of taking a landlord to court by utilizing a 540-A petition. Landlords who ignore the order and continue to shut off or minimize utilities can face a fine of up to $1,000 a day. Mr. Tower told stories of clients who had received settlements of up to $40,000 dollars from landlords by using this petition. 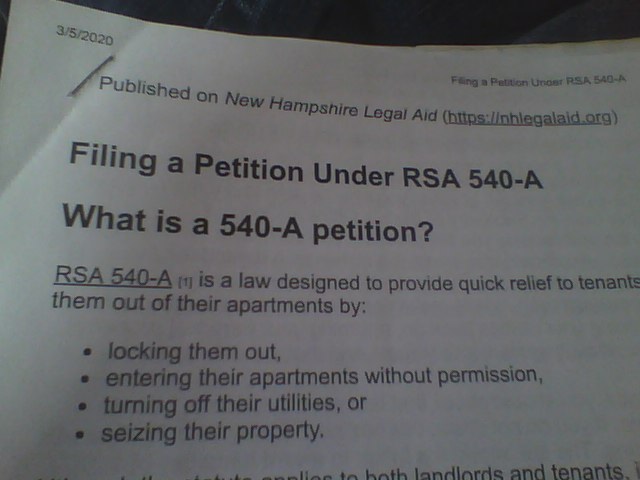 Finally, residents staying at hotels and campgrounds are not legally considered tenants regardless of how long they have stayed there. A person had stayed for nine months at a hotel in Portsmouth only to find they had no legal rights as a tenant under the law; thus, the hotel was entitled to evict the person at a moment’s notice.

While the event was scheduled to end at 8 p.m., the speakers went on longer than this, continuing to answer questions and explain finer points of the law. Some laws are written badly. Others need updating. Still others leave room open for interpretation by the judge involved. In fact, they often had to decline further questions. Landlords, tenants, and third parties not involved continually had a new topic of concern to bring up. Selectman Glenn Oullette repeatedly brought up points of concern tenants in the city had been dealing with, even though he was not himself personally affected. A few state representatives were in attendance in order to learn as much as they could.

Only time constraints prevented the lawyers from doing more. There was every indication that, if they could provide more help, they would.

Please note: the preceding is not intended as legal advice or counsel. If you intend to file a motion or petition in court, please consult an attorney.