MANCHESTER, NH – To say the leadership team at the Manchester Health Department has a big job is a bit of an understatement. And they wouldn’t have it any other way.

“When people ask me what a ‘typical’ day is, I really don’t have an answer for that,” said Tim Soucy, Public Health Director. “We’re a 24-7, 365-day-a-year operation. We all wear multiple hats. I will go from talking to U.S. Senators to picking up needles in the street to engaging the public on key issues during one day.”

When it comes to wearing many hats, Soucy should know. In addition to overseeing a department with an annual budget of about $5 million a year and a staff of 60 employees, he serves as CEO of the city’s Health Care for Homeless Program and is currently holding down the desk of the city’s Welfare Director, during the search process to fill that key vacancy.

Soucy and members of his leadership team – Anna Thomas, Deputy Public Health Director, Nicole Losier, Community Health Division Supervisor, Jennifer Wyman, School Nurse Supervisor, Phil Alexakos – Chief of Environment Health and Emergency Preparedness and Jamie Hoebeke, Division Head of Chronic Disease Prevention and Neighborhood Health – took time out of their busy schedule to sit down with Medical Matters recently to share some of the many issues on the department’s radar in 2018. 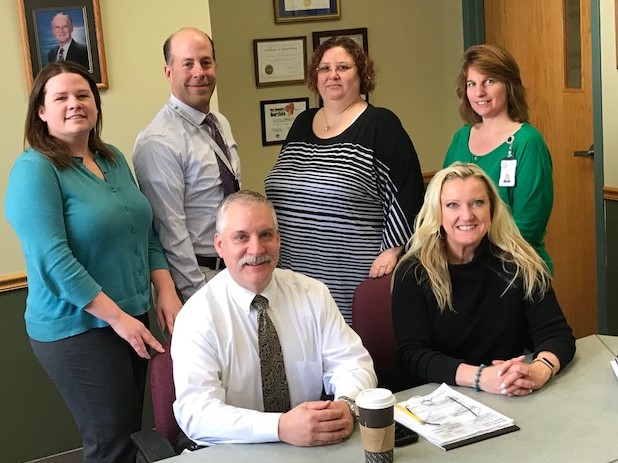 When talking with this group, one gets the immediate sense that the team clearly views their roles holistically, as an integrated unit which not only executes on the day-to-day attributes of their individual roles, but also highly values the collaborative approach of the process.

“We work together very well – it’s a true interdisciplinary approach” says Alexakos. “If a child is identified in the school setting as having a health issue, it may be related to the home environment so that’s an instance in which multiple divisions would work together to identify the cause.”

An example of that partnership could be identifying asthma and any home triggers – dust or other allergens-which would exacerbate a child’s condition and possible impact school attendance, he explained.

Wyman, who oversees 27 school nurses in the city’s 22 schools, says that the type of collaboration described by Alexakos is vital given that the school nurse serves as a “care extender, both from a medical perspective and a social service perspective.” She also noted that nurses work to ensure that children have proper vaccines and support care plans both from a behavioral health and medical perspective and connect with teachers and others as appropriate.

Wyman, who served as an on-site school nurse (Wilson Street School) prior to taking on her current leadership position, said the role of the nurses also includes interactions with local doctor’s offices to ensure care is well-coordinated. “We think about – and worry about – our kids around the clock,” she said. “Not just during the school day.”

According to Soucy the department is funded in thirds – with roughly equal parts being allocations from the general fund, the school district and outside sources (grants and fund-raising). Indicative of the ‘multiple hats mantra’ of the team, he said that all his team was involved in grant writing and seeking outside support for programs. “We are our own grant writers,” he says.

And successful ones at that. The department bagged a significant grant last year from the nationally acclaimed Kresge Foundation. Soucy and his deputy Thomas were named among 40 public health leaders across the country who are part of the Kresge Foundation’s Emerging Leaders in Public Health initiative. According to the foundation, the initiative is “designed to provide public health leaders of county and local health departments opportunities to build additional knowledge and skills to tackle the challenges public health professionals face in their communities. This initiative is part of the foundation’s Health Program’s strategy to accelerate community-centered approaches that promote health of communities.”

This is a big deal for the department and city. The $125,000 grant provides training, resources and technical assistance aimed at helping local health departments both transform and innovate with the goal being to increase capacity where needed.

“On a daily basis, we want to ensure that our work of the department is properly aligned with the needs of the community,” said Soucy. “We need to take on the role of chief strategists and neighborhood health catalyst and see this grant as integral to that.”

Thomas, who has been part of the department for 24 years, says that “we are intent on seeing the future for the city’s health and being prepared for it. We provide the services but need to be the critical thinkers toward (public) health improvement.”

As one might imagine, the opioid crisis is high on the agenda of the department’s work. Less known, however, could be the efforts around chronic disease management (also known as population health) and health education. “We really want to build up opportunities for health improvement and education,” said Hoebecke. “It’s a hand-up (the educational process), not a hand-out.” She listed other social determinants such as hunger, housing and education level as critical to overall health status. Hoebeke’s purview also includes collecting and analyzing data to better align the department efforts.

Losier’s day-to-day work cross cuts several areas of focus and ranges from communicable diseases to oral health to healthy homes, where she collaborates with Alexakos, Hoebeke and Wyman. Prior to getting into the nursing field, she was a biologist.

“We provide a broad range of testing and counseling, which many people don’t know. We also can connect people who can’t afford their vaccination to reimbursement,” she said.

In the coming months, Medical Matters will provide a deeper dive on some of the department’s many initiatives such as the impact of the city’s aging population, health care services for immigrants, behavioral health issues, schools-site health care and progress toward the Kresge Grant initiative.

Each team member also emphasized the collaborative nature of their jobs in connecting outside agencies and partners to one another. “We seek to be a neutral convener,” said Hoebecke, “It’s not just about service delivery, its connecting people to the services they need.”

Chris Dugan is Principal at Dugan PR, where he provides strategic communications, public relations and marketing/communications support to a broad range of non-profit and for-profit clients across New Hampshire. Prior to starting his consulting practice, Chris held senior leadership communications roles at Anthem Blue Cross Blue Shield, the American Lung Association of NH, Optima Health and St. Joseph Hospital. A New Hampshire native, Chris is an active community volunteer and is a member of the Queen City Rotary Club, where he chairs the Marketing/Public Relations Committee. He has been recognized by the American Academy for Health Services Marketing and the NewEngland Society for Health Care Communications. He is a graduate of Leadership Greater Manchester and Leadership Greater Nashua. He can be reached at chrisdugan@manchesterinklink.com.

Chris Dugan is a regular contributor to Manchester Ink Link and writes the Medical Matters column.