Some stars are born and some stars are made… Jodi is a born star! The moment you meet her, before she sings and before she dances, you can feel her illumination. – Mark Schoenfeld

Jodi Katz confidently grips the microphone, gently closes her eyes, inhales and unleashes her formidable instrument. Hallelujah is her song choice, and her dynamic vocals immediately suspend me in shocked, unexpected vulnerability. My initial thought is: She does not need a microphone. Small in stature, one wonders how such an expansive voice could fully reside in such a petite frame.

Although her patterns are complex, still, she somehow finds a way to caress each individual note as its own. Katz serenades with soulful emotion and her voice instantaneously takes me exactly where she wants me to go. Naturally, my memory recalls each occasion, big or small, of significance where I have listened to or heard this song. I am unexpectedly, unlike my usual self, overcome as emotion engulfs me like a tidal wave. Katz’s vocals literally reverberate within my body, as if standing near Marshall stacks.

Now in her 10th tour with the Trans-Siberian Orchestra, Katz’s unwavering faith in herself, fueled by her family’s adoration, supersedes her impoverished beginnings.

“I was always a performer,” says Katz – yeah, she was that kid who lived to interrupt family TV night by jumping off the couch and “putting on a show” strategically staged between her parents and the TV set.

“Ease is a greater obstacle than hardship. I have found that I have a greater need to succeed, that I will take more risks coming from hardship than others that were born on “easy street.” – Jodi Katz

Growing up, Katz’s family experienced financial distress. She chose one present a year from the Salvation Army. Her younger brother wore hand me downs. She wondered why she was unable to attend camp, like her other friends during summer break. However, her parents enveloped her in such an environment of love, she was shielded from the majority of her family’s misfortune.

“I had the most loving parents,” Katz reflects.

Her father and her greatest champion, who has since passed, quipped that his daughter was a singer from the womb.

Katz made her debut in an elementary performance at 7 years old.

“I heard the applause and I knew. I always knew I was going to be a singer. It picked me, I didn’t pick it,” Katz says.

She explains that as she grew older and her voice matured, her tones became warmer, her vocals became bigger and deeper, which she feels distinguishes her voice from others.

“I grew up listening to classic rock like Pat Benatar and Joan Jett and I love soul music!,” she says. At age 14, she begins to perform in public and spent the next four years booking bar gigs and fronting rock bands.

In her senior year at Manchester Memorial High School, during an assembly, Mark Schoenfeld, co-creator of Broadway play “Brooklyn,” was the featured guest. It was a pivotal moment, when Schoenfeld said, “Be ready when opportunity knocks. No one is going to pluck you from obscurity.”

Katz describes the feeling she had, sitting in the auditorium, as a “crazy rush” overcame her. She raised her hand.

“Can I sing for you, Mr. Schoenfeld?” and with that, Katz performed a song by Susan Tedeschi. Schoenfeld  immediately placed the assembly on pause.

“Mark Completely changed my life. Meeting him was the pivotal point I needed,” says Katz.

Schoenfeld met with her family and explained what he recognized as her star quality –  she has the voice, the look, and “ovaries of steel.” What she did not have was the one thing she needed to get out of Manchester: Money. Fatefully, Schoenfeld knew all about how to fundraise from his own experiences, and was just the catalyst Katz needed. He directed her to meet with any and all persons she knew to raise money.

During our conversation Katz retells a plan concocted by Mark, where she had made an appointment with a local attorney on the false premise of discussing an accident claim.

“Mark told me to cock one eye and walk with a limp,” Katz says with a laugh.

Faking an injury, Katz did as her mentor instructed, and limped into the office. Without a word she pulled out her boom box and started belting out a tune. The attorney leaned back in his chair and said, “You’re Mark’s girl, aren’t you?”

Impressed by her gumption, he offered his support.

After almost a year of rallying and fundraising, just days following her high school graduation, Katz, just 18, and Schoenfeld made their way to Los Angeles.

“Talent is 10 percent. I mean at the end of the day, you have to have it, and you have to be able to back it up, but you are fighting against nepotism, girls exchanging sex for favors, kids whose parents can literally pay for them to get a role, or pay for their distribution at a label,” says Katz.

She describes LA as an exciting new world full of celebrities and auditions. The Four Seasons hotel is a far cry from the struggles of Manchester. Katz recalls going to fancy restaurants in Beverly Hills and Hollywood, dining with Mark, along with investors and business partners, enjoying “the best food she ever ate,” and wanting to eat everything.
Schoenfeld helped to mold and refine her, and taught her how to build and maintain relationships. He instructed her in social graces, introduced her to high-powered Hollywood executives and famous actors. He surrounded her with an impenetrable secure network, and had her stand and deliver command performances in public.

It began to pay off. Katz became a back-up singer for Miley Cyrus, then moved on to become the lead singer for the Kidz Bop franchise, performing in arenas, and landed a couple of bit parts in movies. Katz giggles as she recalls the amusement of children attaching themselves to her leg while she worked the audience and belting Kelly Clarkson’s, “Since You’ve Been Gone.”

“You had to be asked to audition” Katz recalls, and you had to hang out with the band for a few weeks to see if you jive. This was a real rock-and-roll band, says Katz. Trans Siberian Orchestra is one of the Top 10 ticket-selling bands for the last decade, rated by both Billboard and Pollstar, and boasts exceptionally elite artists across the board, the likes of Al Pitrelli of Megadeath, former music director for Alice Cooper and Jeff Scott Soto, who sang with, Yngwie Malmsteen and Journey. Once again, in an undeniable twist of fate, one of the lead singers for the West Coast tour secured a stint on Broadway, and Katz was selected as the new lead female performer in the East Coast band for their 2009/2010 winter tour.

“If you’re passionate and really believe in something, people will help you,” says Katz, who has been there and seen that happen.

Currently, Katz is reuniting with her former manager and mentor Schoenfeld on a project, and helping nurture the talent of others. Together they are in development of the upcoming animated film, The Music Boy, and Katz is also managing the career of a 6-foot-tall not-yet-15 year old model  from Mississippi, whom she plans to help transition into the pop music biz.

She knows the ropes, and learned from the best. Now she’s looking forward to whatever comes next.

All I can say is, no matter where that is, she is already a star – her dynamic vocals,  magnetic personality and attractive allure, plus an unsinkable confidence as big as her voice, have positioned her for continued success.

And no, she doesn’t need a microphone.

Appreciate an independent local source of news and information? Consider supporting the InkLink with a financial contribution. Just click here! 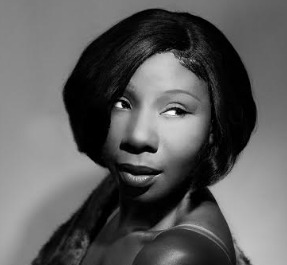