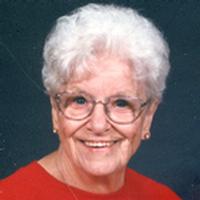 Born in Peabody, MA, on August 29, 1917, she was the daughter of Joseph and Muriel (Robinson) Morin. She resided in Manchester most of her life.

In her early years, Irene was employed with Salvage Shoe Company for fifteen years. Until her retirement, she worked with the City of Manchester School District in the Food and Nutrition Program.

Devoted to her faith, she was an active, longtime communicant of Saint Peter Church, Auburn.

Irene was an avid reader, knitter, and gardener. She enjoyed being with her family, especially her grandchildren, who brought her endless pride and joy.

Services: Following cremation, a calling hour will be held Thursday, September 28, 2017, from 10 to 11 AM at the Connor-Healy Funeral Home and Cremation Center, 537 Union Street, Manchester, NH.

A funeral service will follow at 11 AM in the funeral home.