The Granite State News Collaboratives series, “Invisible Walls,” shows how two powerful forces in Manchester’s history – the Amoskeag Company and land-use zoning – help explain the city’s inequalities today, but there are also other forces at work.

One is redlining, a method of discrimination in real estate lending that helped segregate more than 200 cities around the country, including Manchester. Redlining in its original form was in effect from the 1930s until 1968, when it was banned by Congress.

As described by Richard Rothstein’s best-selling book, “The Color of Law,” the mechanism behind redlining was simple. In 1933, to rescue homes that were about to default, the newly created, federally-sponsored Home Owners’ Loan Corp. (HOLC) began offering beleaguered homeowners a new kind of loan, the amortized mortgage.

In contrast to the more common but riskier interest-only mortgages, which required the borrower to return the principal in a lump sum at the loan’s end, amortized mortgages let the borrower pay a small portion of both the interest and principal in regular installments, making it easier for the borrower to keep up with payments, build equity and eventually own the home.

For cash-strapped Americans in the middle of the Depression, this new path to homeownership was highly desirable.

The question, then, was who would actually be allowed to purchase these loans.

To figure that out, the HOLC decided to do some research into the condition of each neighborhood where they might invest, sending local assessors out across the country to gauge each area’s creditworthiness. The HOLC used assessors’ reports to create color-coded maps, with the safest neighborhoods colored green and the riskiest colored red. Once these maps were distributed to lenders, residents living in red areas typically had a much harder time getting loans from the HOLC, or from any other lender. This is why redlining is now blamed for stunting development in many communities. 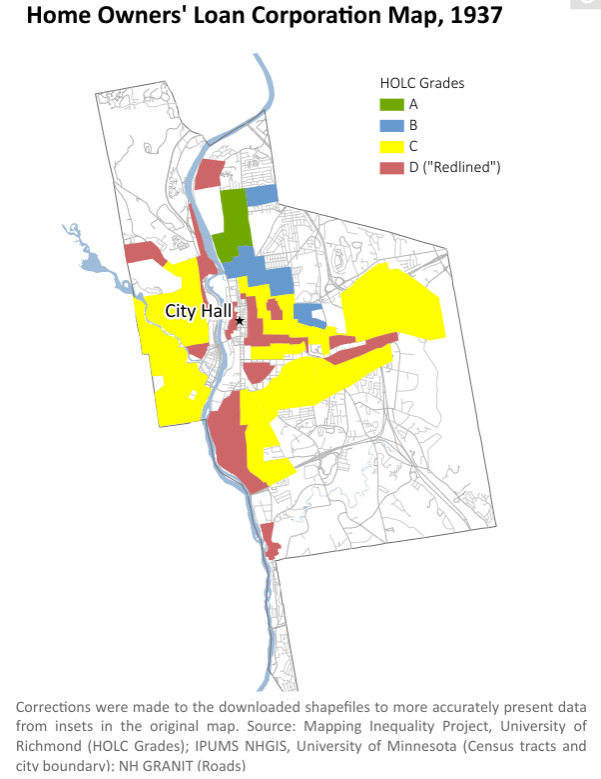 The original 1937 redlining map for Manchester shows that large parts of center city were redlined, as were smaller parts of the West Side, North End, and some neighborhoods in the south and east. But unlike cases of racially motivated redlining that have been documented elsewhere – including New York City, Boston, Chicago, Seattle, Los Angeles, and even Madison, Wis. – in Manchester, the assessors’ comments discriminated based on ethnicity and class.

Take, for example, their summary of center city:

“In [the] section bounded by Beech, Auburn, Chestnut, and Manchester [Streets],” the assessors’ wrote, was a warren of rundown houses that were “inhabited by a mixture of foreign people,” mostly French, Polish and Greek laborers who worked in the mills and shoe factories and who were accompanied by a “large number” of families on welfare.

That area was redlined.

In contrast, consider the assessors’ notes for part of the North End, which was given the assessors’ highest creditworthiness rating due to the predominance of “business executives and professional people,” all of whom were native-born, and none of whom was on welfare.

Why didn’t the Manchester assessors cite race on any of their reports? It’s impossible to know for sure, but one simple answer is that there were few racial minorities in the city to discriminate against. According to U.S. Census data, the city’s non-white population in the late 1930s was small – a grand total of 50 non-white residents, including 23 identified as “Negro,” out of a population of nearly 78,000.

These shapefiles and geo-referenced image files show how the zoning maps in Manchester changed from the 1920s to the early 2000s.

These files are the only analysis-ready versions of the maps that we know of. The scans were geo-referenced and digitized by Data and Research Editor Johnny Bassett.

We digitized these maps so we could see how residential zoning has changed in the city over time. After converting the maps into their current form, we consulted the available zoning ordinance booklets to standardize each map’s zoning codes by density. For example, single-family zoning was categorized as lowest-density housing in each map, while whichever category allowed the construction of the most units per structure was categorized as highest-density. This helped us make some basic observations about how zoning had changed in the city.

Many thanks to the Manchester City Planner’s Office and the Manchester Historic Association for providing the underlying maps. Our thanks also go out to Bill Wilkinson, who helped with scanning.

The history of redlining in Manchester offers a rare glimpse into the kind of ethnic and class-based discrimination that shaped much of its early history, presaging the exclusionary zoning practices that have continued into the 21st century. Redlining certainly played some role in the city’s development, and it deserves further exploration.

“Invisible Walls,” is an ongoing joint project of the Granite State News Collaborative, NH Business Review, Business NH Magazine and NH Public Radio that describes how exclusionary zoning laws have reinforced areas of persistent poverty, impacting many aspects of community life, including crime, public health, affordable housing and access to economic opportunity in Manchester. The team used Manchester as a case study, but the same sorts of exclusionary zoning practices present in Manchester are common across the state, and likely have had similarly-broad effects. 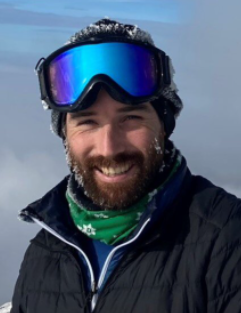