Professional baseball is (almost) back in Manchester! We hope you enjoyed our imaginary 2020 season, even though it didn’t end so well. Good ending or not, a virtual season isn’t quite the same as the real thing. So, without further ado….. It’s April 30, 2021 and here’s your weekly look at what’s coming up for the New Hampshire Fisher Cats on their ongoing quest toward Toront..er, Buffalo. 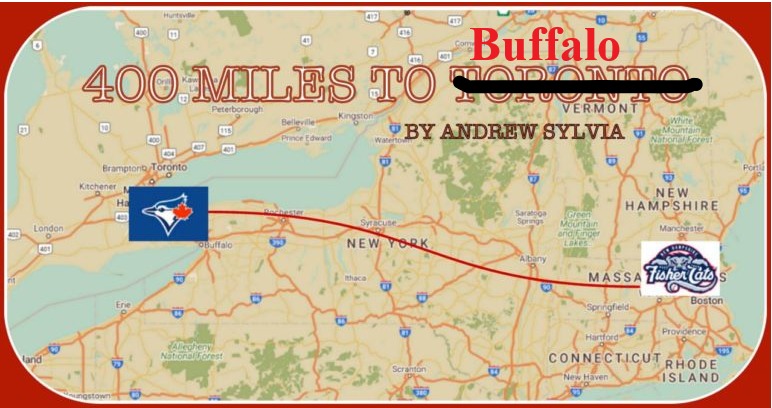 So, over the past few years we’ve named this column “400 Miles to Toronto” even though it’s actually around 500 miles from Northeast Delta Dental Stadium to Rogers Centre because the usual next step to the Majors for Fisher Cats player is actually Sahlen Field in Buffalo, NY, the normal home of the Triple-A Buffalo Bisons, which is a little over 400 miles away from the Queen City if you take the shortest route. Maybe this is too cute by half, maybe it should be “500 Miles to Toronto,” or it should be in kilometers since they have the metric system up there, but for now, the play on words has a whole new meaning.

In case you did not watch any Major League Baseball last year or this year, or you are completely unaware of anything happening outside of the United States, but the Canadian border remains closed for most purposes, forcing the Blue Jays to stay south of the border and play their home games at Sahlen, making it a temporary Toronto of sorts (400 Miles to Temporary Toronto?)

Meanwhile, the Bisons will be playing in Trenton, NJ at ARM and HAMMER Park, the home of the Trenton Thunder, who are no longer a Double-A team. Yes, technically this should mean the column should be re-named “311 Miles to Toronto” given how far the Garden State’s capital is from here and the current situation, but for now, we’re going to roll with it.

That isn’t the only change this season for Fisher Cat fans. The Eastern League is gone, replaced with the Double-A Northeast Division as part of Major League Baseball’s ongoing effort to take player development out of small towns across America.

In addition to that, there will be no All-Star Game, no playoffs, and less travel for the teams. The reduced travel comes from the elimination of homestands and road trips consisting of three or four game series against multiple opponents. Instead, the teams will play a six-game series against one opponent, with homestands and road trips consisting of one or two of these series in a row. That will continue until around when the Eastern League playoffs would have ended in the second half of September.

Here in New Hampshire, another change involves tickets being sold in pods rather than specific seats, allowing flexibility for fans to sit in certain areas to facilitate social distancing.

Despite all the changes and all the uncertainty left with the pandemic, incoming Fisher Cats Manager Cesar Martin says he felt an excitement in the air at Spring Training and the following simulated games in Florida in April.

“Everybody looked really hungry to play. The last year felt like five years,” he said. “Everybody’s first game felt like the playoffs, everybody was hungry. Everybody was happy to be back in a real game, or even just taking batting practice against a real pitcher.”

Your Starting Lineup (We Think)

Although the Fisher Cats’ first game is on Tuesday, Martin says that the lineup is almost ready, but some areas are still in flux.

From the 2019 Fisher Cats, Vinny Capra and Brock Lundquist will be returning, likely reprising their roles at third base and leftfield, respectively. Demi Orimoloye (pronounced “oar-malloy”) will likely have a spot in right, and Sportsnet Columnist Shi Davidi reported yesterday that Blue Jays 2020 First-Round Draft Pick Austin Martin will be joining the Fisher Cats this year.

Martin played shortstop at Vanderbilt, but it’s unclear where he will fit as of yet given several other middle infielders on the team such as Otto Lopez, Luis de Los Santos and Kevin Vicuña to name a few.

On the mound, Simeon Woods Richardson, a key piece in the Marcus Stroman trade, is going to be one of the Fisher Cats’ key arms, and Zach Logue will play a significant role in the rotation if he doesn’t get a call up.

One more difference in this year from previous seasons however is the types of players that will be coming to Manchester.  Before 2020, there were seven levels in Major League baseball’s minor league development system. Now there are only four, meaning players coming straight out of June’s college draft and players requiring additional development in the Rookie Leagues that remain will now be pushed upwards.

Martin believes that this season will see a mix of the elite prospects on the verge of reaching Major League talent, as was the general case in Double-A prior to the pandemic, and some Single-A prospects being supplanted on Single-A teams by those players now without teams.

As mentioned, next Tuesday marks the Fisher Cats’ return to play, as they head to Hadlock Field for a series with the Portland Sea Dogs, with the weekday games set for 6 p.m. and the two weekend games set for 1 p.m.