I was not an evil child, but I was wicked, a distinction that matters. Evil identifies the good and sets out to destroy it. Wicked people raise the bet without knowing what’s at stake. Evil requires focus and determination, while wickedness results from boredom and distraction. Evil descends and leaves no survivors, while wickedness drifts in and disrupts. Today, I don’t think I’m either, but who can tell for sure?

As a little boy, I found little evil around me. In fact, Durham, NH, in the 1960s may well have been ur-America — the archetype for Making America Great Again. Without wanting to turn this into a theological brief, I am thankful for that evil drought, for a taste for wickedness got me into plenty of trouble as it was.

(A brief aside: it strikes me that Durham, as a college campus, was the site of various protests against the war in Vietnam. My vision of peace, decency and America may not have been the experience of parents who sent their children to college at the University of New Hampshire and had them come home as radicals. Those mothers and fathers may well have viewed Durham as Satan’s Saucepan. On the other hand, my personal vision of our country’s best includes people protesting injustice, war and other crummy stuff, so I’ll stand by my take.)

Although I was wicked, I was drawn to mundanity in the books I read, the literature that mirrored the normal life that surrounded me. (Another brief aside that undercuts my argument but must, in the interest of truth, be said: the normal neighborhood I lived in and played kick-the-can in had a neighboring husband and wife making out in a car in the garage while I endeavored to kick that can and free the prisoners. “Normal” is what’s normal to you, I suppose.)

While I was disrupting my second, third and fourth grade classrooms with frustratingly disruptive and subversive behaviors, I was also going to the town library at least once a week to fill up my book bag with literature.  In the last sentence, I used the word “subversive,” which sounds as though I were a member of a Communist cell or part of the Elementary School Wing of the Students for a Democratic Society.  I wasn’t, although had either the American Communist Party or the SDS recruited me I would have been open to an offer.  Instead, I was trying to subvert the order of the classroom, planting ladyfinger firecrackers at the nexus of authority and boredom.  I just liked to watch the fur fly, honestly.  But not in my reading. There, I cuddled up with normal normal, not just normal to me.

At the ages of 6 to 9, I was not reading the Little Golden Anarchist’s Cookbook or Winnie the Pooh and the Days of Rage. Abbie Hoffman’s Steal This Book wouldn’t be written for a few more years, although as soon as it was it became my favorite reading. 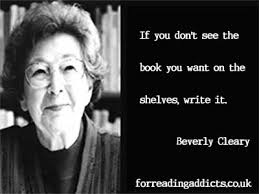 Little Keith read Doctor Doolittle, Homer Price and The Lion, the Witch and the Wardrobe.  My favorites, though, were about Henry Huggins and his dog, Ribsy.  I read about going fishing with Mr. Huggins for Chinook salmon, an exotic breed I pictured about the size of a golden retriever.  These books were written by Beverly Cleary, set in Oregon, and captured an order I could have lived with.  Each book had eight or 10 chapters, an overarching goal (get a dog, hold down a paper route, build a clubhouse) and a series of compelling/amusing stories —  really — to move the reader along to the end.

Henry Huggins was an only child, but he had friends, of course, including a girl named Beatrice Quimbywhose younger sister, Ramona, had mangled her name into Beezus, which had stuck. Beezus’ life was even more normal than Henry’s, if only because she had an annoying little sister, just like me. Later, when I’d moved on from Henry and Beezus, Ramona went on to star in a series of books, which are, honestly, more interesting and better than the ones I grew up on.

Beverly Cleary created a world where goals were set, plans were made and achievements were accomplished. I lived in my own world, where boredom loomed around every corner and had to be destroyed by any means necessary, another symptom of wickedness. Henry, Beezus and Ramona were, to all appearances, as normal as the kids in my neighborhood, and I couldn’t imagine Mrs. Huggins making out with Mr. Quimby. That would have seemed evil to me.

Even if it would just have been wicked.

If you’ve read this far you must be a serious Beverly Cleary fan, perhaps one who grew up in Valley Stream, which has always sounded to me like a setting for a Bobbsey Twin book, or a vacation spot for the Huggins’. I hope you are well and know I think of you often and always fondly.

If you’ve read THIS far, and didn’t grow up in Valley Stream, you’re probably hoping for news of a sequel to The Mouse and the Motorcycle. I don’t have such news, but Ms. Cleary is only 101 years old, so she may be working on it now.  Next month you can wish her a happy 102nd birthday. You could look it up!