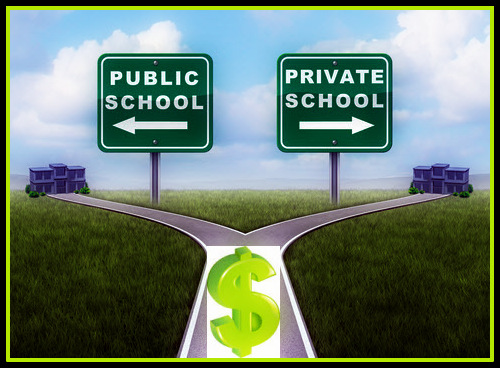 The State House meeting hall was hot and stuffy at 10:30 p.m. last Thursday night, just before the Senate was due to close the 2018 session, when the Senate passed an amendment providing a $100,000 death benefit for teachers killed in the line of duty to HB 1636, an unrelated bill establishing a committee to study education policy.

Then, in a surprise move, Sen. John Reagan (R-17) added another amendment with the original wording of SB 193 onto HB 1636. Previously, the House Finance committee extensively revised the bill before recommending against it. The House then rejected it. On Thursday night, the Senate agreed to the school voucher amendment on a party line vote.

When interviewed back in March, Reagan, the original sponsor of SB 193 and chair of the Senate Education Committee, talked about why he initiated the legislation.

“I had thought about a bill like this for years, and believe parents should get a little bit of the enormous amount of tax money that goes to schools so they could have options. The positives are obvious,” Reagan said. “Any time you enter competition into the equation you get an improved product, and often at a lower price. We pay an exorbitant amount for public education – yet we rank 25th nationally on test scores. Why we would not trust the parents to educate their children is beyond me.”

Reagan says pushback against the bill is driven by teachers unions. “The whole battle is unions versus freedom for parents; it’s the unions that fight this thing. If you have any exposure in Concord, you can see they’re the most powerful influence on lawmakers. Let me give you something to think about: If all the children left your school, the budget would be zero. We don’t know there aren’t enough private schools to accommodate those students. The market would fill that need.”

He cites not only private initiatives, but also at least five parochial schools around the state slated to expand or open by the Diocese of Manchester, based on increased enrollment.

Reagan says there are many people who favor school choice who have been frustrated trying to open private charter schools because of the restrictions he says unions have worked into the state’s charter school bill.

“Here’s what we know nationally, that any time you put in a savings account or voucher plan, schools get better,” Reagan said. “It’s a wake-up call for public education, which brings us back to why I introduced the bill – I believe parents are the best able to judge what’s best for their own children. If we don’t believe that, then we must believe the government is the best caretaker.”

Reconsideration passes back to the House

HB 1636 (now amended to include the language of the original version of SB193) will be sent back to the House, which will meet May 10, May 23, and May 24. It will have a choice of concurring, requesting a committee of conference, or letting the underlying bill die. Rep. Rick Ladd (R-Haverhill), chair of the House Education Committee, will recommend one of these three actions to the House, but the House does not have to agree with his recommendation. Watchers believe he will either recommend that they concur or that they send it to a committee of conference. On May 2, Ladd had voted to keep the bill alive, voting against interim study.

If Rep. Ladd recommends “concur,” then it’s not clear when the vote will be, but there are only three sessions left: May 10, May 23, and May 24.

Sen. Kevin Cavanaugh (D-16) was in the Senate last Thursday night. He voted for the first amendment, the death benefit for teachers, but voted against the school voucher amendment, and then against the bill. Cavanaugh said, “This is such a controversial, major policy change for the state. Making a last-hour desperation move after the House defeated the bill was disappointing. It just shows why people don’t trust politicians.”

Rep. Larry Gagne (R-6) said, “I don’t think it will go through. I think the interim study will prevail because the original bill was not what we wanted. They’ll probably send it to the committee of conference, which won’t agree. It’s probably dead for this year.”

He said this about the bill, “I think it’s a good thing because it’s the parents’ money to begin with. They should receive it instead of paying tuition plus taxes for schools they don’t use. “

Rep. Mary Heath (D-14), who is on the House Education Committee, wrote in a statement:

“I am deeply concerned regarding the actions of the NH Senate. Last week on Wednesday and Thursday, the House voted to send SB 193 to interim study. In a late night session, the Senate brought back SB 193 by attaching the original version of the legislation (the version introduced in early 2017) to an unrelated bill, HB 1636. HB 1636 was a bill sponsored by Represented Mary Gile and myself to study current practices in NH teacher education preparation programs,” Heath said.

“The version of SB 193 that the House sent to interim study was limited to about 38,000 students in New Hampshire in its first year. The non-partisan Legislative Budget Assistant (LBA) estimated that this version of the bill would have resulted in local taxpayers assuming the costs for the loss of $99 million in state funding over eleven years. The original version of SB 193 has much deeper implications for local taxpayers, the state of NH and most importantly, the quality of public education in NH. The costs of the current version of SB 193 could not be accurately calculated and could be devastating.”

Manchester Rep. Victoria Sullivan (R-9) who sits on the House Education committee, said she is pleased that the bill gets another go round.

“Supporters of school choice are grateful to the New Hampshire Senate for giving us another bite at the apple.  All children should have the opportunity to seek out the education that supports their individual needs.  Aiming for an adequate education is settling for the bare minimum,” Sullivan said. “We should be supporting children in ways that help them thrive and reach their full potential. It is a shame that so many untruths have been spread about this bill. The students’ needs should always be the first priority for all the adults involved in education in our state.”

“I believe every parent should do what is right for their children and that choice is important, but I do not believe diverting funds from public schools is the answer. We are trying to bring new ideas and programs to the Manchester School District to help prepare our students for the future, and to attract new students to the district. This bill will negatively impact our progress.

Our district would need to consider significant cuts to address this loss. These cuts could mean eliminating course offerings such as Spanish at the middle schools, that we were finally able to bring back last year. Cuts to staffing levels, which would increase our class sizes; or changes to policies related to bus routes or athletics including pay-to-play. This bill could cause needless harm to our district in the form of reduced services and programs for our students.”

The version of SB 193 revived by the Senate differs dramatically from the version that had been killed by the House, which had been amended multiple times by both Education and Finance committees. The May amendment does not restrict eligibility, provides no grants to school districts, and has more limited accountability requirements.

On May 7, Reaching Higher NH, an education policy organization, released an analysis of the school voucher amendment. The analysis shows that the bill would take $266 million from New Hampshire public schools over the life of the legislation while giving an additional $53 million to current private school students.

This is a drastic increase in spending, even compared to the bill rejected last week by the House. A March  Reaching Higher NH analysis showed that the school voucher bill as amended by the House would potentially take $141 million from New Hampshire public schools. The cost increase from the previous bill to the current one is a result of student eligibility increasing from roughly 38,000 students to 172,000 students.

Jeanne Hruska of the ACLU of New Hampshire, wrote:

“SB 193 would violate the N.H. Constitution’s strict separation of church and state by allowing public funds to go to religious education. Proponents of SB 193 state incorrectly that by giving money to parents who then give it to religious schools, the bill skirts around the constitution. If only the constitution were so easy to evade.

Part I, Article 6 of the N.H. Constitution states, ‘No person shall ever be compelled to pay towards the support of the schools of any sect or denomination.’ Part II, Article 83 also states, ‘Provided, nevertheless, that no money raised by taxation shall ever be granted or applied for the use of the schools of institutions of any religious sect or denomination.’ The N.H. Supreme Court has interpreted these provisions as strictly prohibiting any direct or indirect use of tax funds for religious instruction.”

Carol Robidoux contributed to this story.