MANCHESTER, NH — At 6 p.m. on a Thursday in the blue-black cold of a New Hampshire winter’s day, several people gathered around to honor and respect homeless people who had died this past year. Ice patches decorated the ground. Hard packed snow crunched beneath sneaker and boot alike. While the evening sky was clear, cold wind swirled about and bit exposed skin wherever it could. The wind chill in Manchester was 0 degrees Fahrenheit. No one could ignore the cold, even those who had dressed warmly for the occasion. Exposed hands quickly grew numb. People shifted about in the heavy coats and hats, trying to stay warm.

Those who gathered for the memorial service were staff members of the Catholic Medical Center’s Healthcare for the Homeless (HCH) Program, members of the community, and Mayor Joyce Craig. Mayor Craig stood to one side, shivering in the cold, listening with morose attention to all which occurred around her. Each person carried an electric candle with them. Glowing bags lay scattered across the ground, some of which were blown down by strong gusts of wind.

A somber prayer opened the event, followed by a struggling, quiet hymn. Mayor Craig read a statement proclaiming December 19th to be Homeless Person’s Memorial Day. A list of 23 first names was read. Each name signified the death of one person who had been homeless either now or in the past, and had died this past year. Some died due to violence, others to disease. 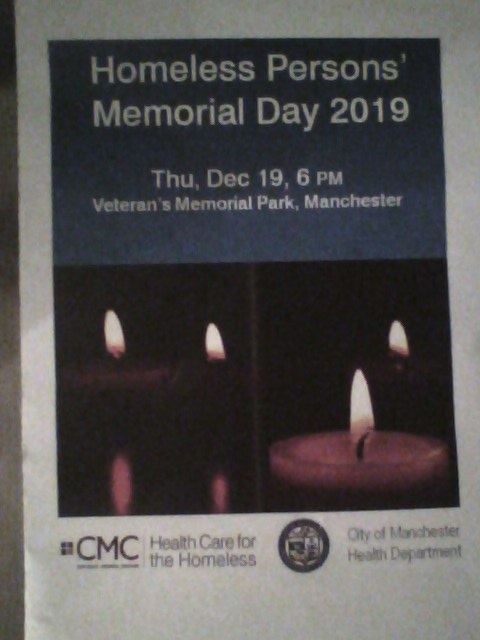 Being homeless, any member of the HCH program will tell you, increases a person’s medical vulnerabilities. Exposure to elements is a common vulnerability, as many homeless people do not have a car to go anywhere or a house in which to retreat during the cold. Those who stay at the New Horizons shelter often have to endure a loud, often chaotic environment in exchange for being able to stay warm. For anyone who is without a home, a quiet and warm place is difficult to find. Solitude is even harder. Anyone who is homeless never gets to be alone when they want to be. There’s no space to breathe and relax, and just be oneself. The comforts of a home, however spacious or cramped, are completely denied to those who cannot afford it. Access to restrooms is spotty, at best. While there are two portable restrooms near Veteran’s Park, other facilities require a purchase beforehand. The result is many homeless folks end up doing their business in alleyways without any thought of sanitation or cleanliness. They just need to go.

Hospitalization is a common experience for the homeless population. There, they sometimes encounter staff from the Catholic Medical Center. The healthcare team often gets close to their patients and care about what happens to them. When such a patient dies, it’s not only a loss to their family and friends, but to the medical professionals who helped them regularly as well. The memorial service held on the 19th was as much for those who passed as it was for the people who helped the deceased while alive.

As the staff read off the names of the deceased, some of them struck home in a particularly emotional way. Faces were put to those names. These were real people who had real lives. Whatever they had been going through, for good or ill, they had all been trying as best they could to deal with their circumstances.

This is recognized at CMC where one of their core values is the dignity of each individual. Each human being has an intrinsic humanity in them, whether they are sleeping comfortably in a queen-sized bed in a heated house, or shivering beneath a blanket upon a cold, uncomfortable sidewalk. Seeing how they are for an individual moment is not the same as seeing who they are as an individual person, what their hopes are, what they want out of life, what they’re striving toward, what they’d like to see happen in the near future.

As such, they don’t use the word “homeless” when referring to any of their patients any more than they use the word “housed” when referring to someone who has a home to live in. The word homeless often takes on a derogatory connotation when used to refer to an individual, often implying that someone has failed in a significant way or other, personally and economically. The blame for such failure almost always falls upon the individual person rather than their local economy, the average price to rent an apartment or own a home, or the availability of jobs in their local area. The CMC staff, regardless of where they may serve, try to have as much compassion as they can for each patient they serve.

While they do the best they can while they can, life sometimes intervenes. Bad things happen to all kinds of people. Death, unfortunately, comes to visit all of us sooner or later. The service ended with this in mind. Everyone knew that homelessness would continue. People would continue dying, no matter how hard anyone tries to prevent it.

Nationally, Homeless Persons’ Memorial Day is recognized as December 21. This is officially the first day of winter and the longest night of the year.

Winter Trabex is a freelance writer from Manchester.