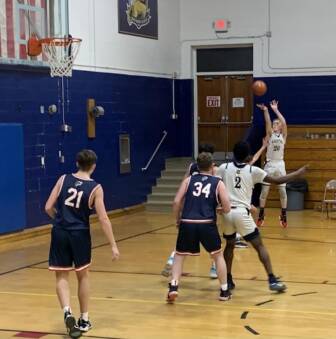 MANCHESTER, NH — No. 6 Holy Family Academy overcame an historic performance by Josh Robie, and advanced to the quarterfinals of the Division IV State Tournament, with a 69-58 win over No. 11 Profile School, Monday night at the Cartier Street gym.

Just a sophomore, Robie put on a breathtaking offensive performance in the second half, pouring in 30 of his game-high 37 points. Robie had 22 points in the fourth quarter alone, including six of his nine 3-pointers. At one point, he drilled five straight from beyond the arc.

Still, Robie’s heroics were not enough to overcome Holy Family, which built a 16-point halftime lead and extended it to 23 midway through the third quarter. 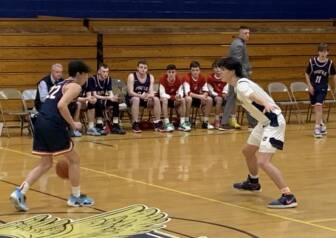 Guard Yves Murgianeza had 22 points and forward Karl Yonkeu added 20 points, to go with 18 rebounds and blocked three shots to lead the Griffins, who are playing in just their second NHIAA tournament.

Holy Family will next host No. 14 Newmarket Thursday, 7 p.m., with a chance to advance to the D-IV Final Four for the second straight season. Newmarket (10-9) advanced with a 53-47 upset win over No. 3 Epping in the opening round on Monday.

Holy Family (15-4) dominated the first quarter against an extremely young Profile squad, building a 19-2 lead after eight minutes. Profile, with a roster made up almost entirely of freshmen and sophomores, showed their nerves early on and the Griffins took full advantage. 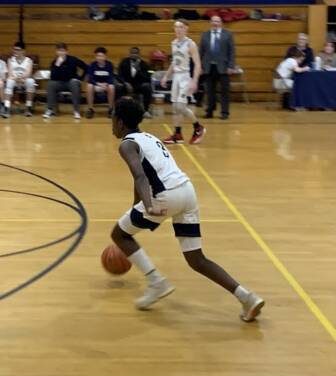 “We wanted to make a strong start, just like you saw, because sometimes we come out flat and then have to come back as the game goes on,” said Holy Family Coach Keith Lecasse. “We wanted to come out strong early and keep that lead and then try to extend it. We didn’t want to let our foot off the throttle, even for one play.”

As the game wore on, Lacasse was thankful his team built an early lead. Profile (10-9) shook off the early jitters and came to life in the second quarter. The Patriots tried to claw their way back into the game behind the play of Robie and fellow sophomore Alex Leslie (20 points, 12 rebounds).

But each time Profile tried to gather momentum, Holy Family had an answer from a different offensive threat. Sean Sullivan (9 points) and Gabe Lacasse (10 points) had 3-pointers to spark a 10-2 run in the third quarter, helping the Griffins build their biggest lead of the game, 40-17, midway through the third quarter. 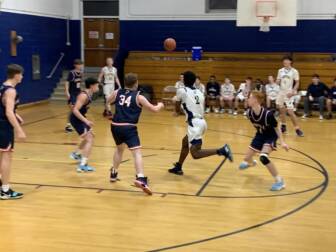 It was about this time that Robie decided to matters into his own hands. The sophomore had eight points in a 10-2 run, cutting the Holy Family lead to 15 (44-29). Robie was just getting warmed up.

Down 20, Profile went on an 11-4 run to open the fourth quarter, pulling to within 53-40 with 4:40 remaining. Robie was lighting it up from the outside, while Leslie was aggressively driving the lane. Two more 3s by Robie cut the Holy Family lead to 12 and yet another made it 64-54 with just under a minute left.

It was a scene playing out that Keith Lecasse found all too familiar. Back in December, Holy Family met in the opening round of the 42nd Mike Lee Holiday Basketball Bash in Farmington. All Robie did that night was connect on a tournament-record 11 3-pointers (15 for Profile, as a team.) Lecasse and Holy Name were fortunate to escape with a 68-66 win.

“That’s why we wanted to have that early lead, We know what (Robie) can do. He is a great shooter.

There would be no such drama Monday night. Muriganeza and Yonkeu calmly hit 10 of 12 free throws down the stretch to put the game away.