MANCHESTER, NH – Next month Robb Curry and Kyle Davis will celebrate one year as restaurateurs in Manchester. Their place, Madear’s, is tucked away on the other side of Pine Street, just far enough from downtown proper to be off the beaten path.

They are proud to count themselves among the city’s growing number of gay business owners who have a vested interest in the city’s success.

They hoped the feeling was mutual.

So, Curry approached Mayor Joyce Craig two weeks ago to see if she would be willing to raise a rainbow flag at City Hall as a symbolic gesture of support for the LGBTQ community during Pride Month.

“He contacted me and I said yes, of course. And through the process of City Hall they made it happen,” Craig said. “It’s crazy to think that we’ve never done it before, but now we’ve started a tradition and it’s a place to start –  and hopefully we can grow it. Hopefully this is the start of what June can be, and we’ll have the rainbow lights on top of City Hall,” Craig said, referring to colorful LED lights that will be illuminating the clock tower and its spires.

“City Hall belongs to the residents,” said Craig. “It doesn’t have to be raising a flag. Anything that we can do to help encourage a sense of community and participation, we’re here.” 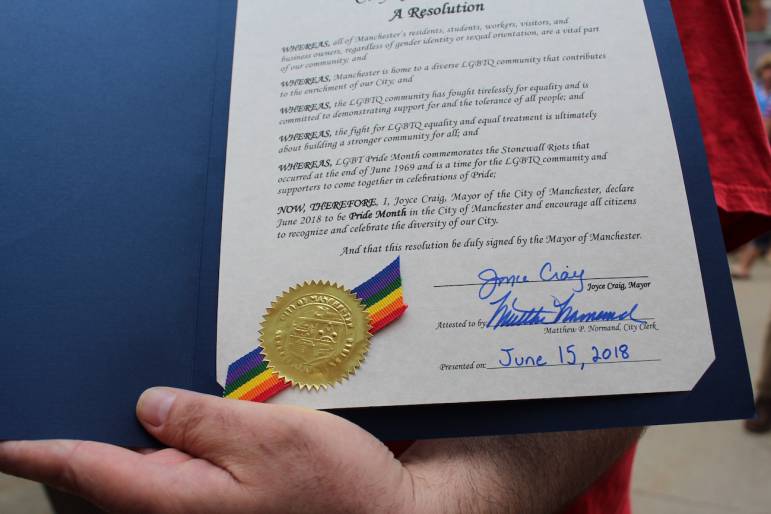 Craig read a proclamation, sealed with a rainbow ribbon, that read:

Whereas all of Manchester’s residents, students, workers, visitors and business owners, regardless of gender identity or sexual orientation, are a vital part of our community; and

Whereas Manchester is home to a diverse LGBTQ community that contributes to the enrichment of our City; and

Whereas the LGBTQ community has fought tirelessly for equality and is committed to demonstrating support for, and the tolerance of, all people; and

Whereas the fight for LGBTQ equality and equal treatment is ultimately about building a stronger community for all; and

Whereas LGBT Pride Month commemorates the Stonewall Riots that occurred at the end of June 1969 and is a time for the LGBTQ community and supporters to come together in celebrations of Pride;

As mentioned in the proclamation, it has been nearly 50 years since the New York Stonewall Riots, which followed a police raid of a Greenwich Village gay club. Six days of violence, riots and protest followed, which is now regarded as the origin of the gay rights movement.

More than 100 people gathered Friday at City Hall Plaza for the event, including Brenda Noiseux, who was distributing personal-sized rainbow flags to everyone in attendance.

“I’m so excited to have this in Manchester. All the other major cities have pride events, so to have this is a start, it just means so much to me,” Noiseux said.

“It’s nice Manchester is showing how inclusive it is for everyone,” said Patty Cornell, who attended the celebration with husband Rik Cornell, Vice President for Community Relations at The Mental Health Center of Greater Manchester.

“I’m here to support mental health in this whole endeavor because it’s so important – there are so many people here in the city struggling with all kinds of stigma and I think it’s important we show our faces here, in support of this,” Rik Cornell said.

Naomi Andrews, who is running for Congress in NH1, said as a longtime proponent of equal rights, she felt particular pride in the moment.

“I’m so proud of this city for doing this today,” said Andrews. “Fifteen years ago I was part of leadership of Middlebury Queer Alliance, and I’ve always been an ally of the gay community.”

Andrews said she also worked for more than a decade for Congresswoman Carol Shea Porter, and recalled an anecdote from 2007 that has stuck with her.

“We were in an Armed Services hearing talking about ‘Don’t Ask, Don’t Tell,’ and Carol said to the witness, ‘Tell me, when did you decide to become heterosexual?’ and so our office has been there this whole time working toward opening up equality for all.”

Elizabeth Ropp and husband Eric Zulaski attended the celebration together.

“Having a Pride flag in our city makes me feel like, yes! We’re going to become more colorful, more vibrant, and more inclusive in the city of Manchester,”  said Ropp, who recalled attending a Pridefest at Veterans Park many years ago, organized by Occupy NH.

“It was one of the most beautiful festivals I can remember at Veterans Park,” she said.

Zulaski said he appreciated having a ceremony sanctioned by City Hall.

“People don’t appreciate the diversity that Manchester has. This flag symbolizes to people who are already here that you are welcome, and you are part of the community, and because of that, they shouldn’t feel marginalized,” Zulaski said.  “Especially on government property, that statement is especially reassuring –  even though in other aspects of their lives they may feel marginalized, at the very minimum we’re in a democracy; everyone should feel a right to live and exist and have all the rights afforded to a citizen of the United States.”