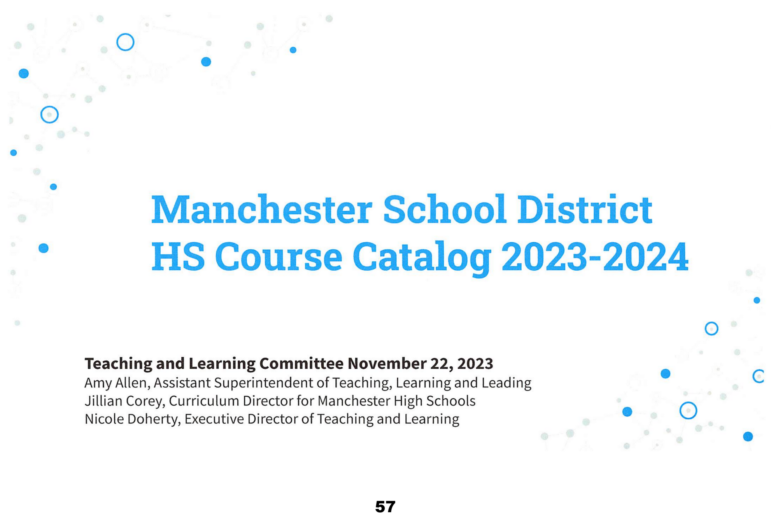 MANCHESTER, N.H. – On Tuesday, the Manchester Board of School Committee (BOSC) Teaching and Learning Committee recommended the proposed high school course catalog by a vote of 3-2, with disagreement hinging largely on the catalog’s implementation of de-leveling policies approved by the BOSC last year.

The concept of de-leveling merges remedial classes with classes containing a more prototypical curriculum, due primarily to the concept that there is a concept that many students are saddled with the expectation that they cannot excel and are then shunted into lower-level classes when they could otherwise succeed. In the district’s de-leveling policy, honors courses would remain, but all other courses would be merged into a single level in the attempt to encourage students to strive for greater achievement than they otherwise might.

While the concept does not impact advanced placement classes, opponents of the concept believe that bunching together students of different skill levels has a deleterious effect on students, with higher-level students in the new mixed classes believing that the coursework is going too slowly and lower-level students believing it is going too fast as instructors are forced to strive for a “one-size-fits-all” model.

Despite the BOSC approving de-leveling as a district policy last year, implementation has been delayed due to a lack of professional development for educators on “differentiated learning,” or the pedagogical concept that creates courses that work simultaneously for higher-level and lower-level students.

At the beginning of the meeting, there was almost 45 minutes of testimony from individuals espousing opinions within one of those two camps in the de-leveling debate or in support of new classes that teach students about social studies beyond traditional European and North American topics that touch upon the histories of minority students, particularly African studies.

Opinions on the committee also varied, albeit on a more nuanced continuum.

Ward 9 BOSC Member Ben Dion said that this subject had drawn more feedback than any other from educators, parents and students and many had told him that they were worried about the implementation.

While Dion liked different math subjects in the catalog that he felt could help students as well as cross-disciplinary approaches, such as using concepts learned in math to help learn science subjects, he felt that de-leveling was unrealistic unless class sizes could be placed at 20 students or below and teachers receive differentiated learning training, especially in more advanced topics like economics.

Dion also expressed concern that educator input was not given enough weight in construction of the catalog.

Ward 6 BOSC Member Ken Tassey Jr. also said he received concern from members of the community regarding the concept and felt that the desires of students heard earlier in the meeting in fear of the concept were being ignored.

When Tassey asked if feedback had been obtained from students, parents and educators, Manchester School District Assistant Superintendent Amy Allen said that the Manchester Proud organization had reached out to 4,000 members of the community on the topic. When Tassey then said he believed that Manchester Proud aimed advocate for the concept, Manchester School District Superintendent Dr. Jenn Gillis said that the approach of district leadership is a collaborative one and all viewpoints are taken into account when implementing district policies.

District leaders also told Dion that committees tasked with building the catalog were led by educators.

Ward 1 BOSC Member Julie Turner supported the concept, echoing sentiments stated by members of the public that in this case “perfect is the enemy of good,” and progress must be made toward equity gaps in the district.

Ward 3 BOSC Member and Teaching and Learning Committee Chair Karen Soule also supported the concept, but said that mandatory differential education professional development should be required and additional cultural studies classes like the ones discussed earlier in the meeting should be added as soon as possible. She also said that more effort needed to be done to hire paraprofessional educators that can assist with differentiated learning efforts and actually saved her comments until after the vote given the length of the discussion.

Before Argeropoulos spoke, At-Large BOSC Member Jim O’Connell and Ward 4 BOSC Member Leslie Want spoke in favor of the catalog, although they were not eligible to vote on the recommendation as they are not members of the Teaching and Learning Committee.

O’Connell said it was an easy vote to make it he had the chance to vote, noting that if de-leveled classes were already a fact and there was a proposal to hire new educators to “level” classes, it would likely be shot down almost immediately. O’Connell echoed the sentiments of Manchester West High School Principal Richard Dichard to stop using the phrase “de-leveling” and instead focus the concept around universal student expectations of excellence. He also echoed the sentiments of Manchester Memorial Principal Shaun St. Onge in that all educators should be well-versed on the concept of differential learning and that educators familiar with the concept should be willing to aid their peers in mastering it.

Want simply noted that district leaders were following the directive of the BOSC when the approved de-leveling as official policy and not recommending the catalog would require re-visiting the months long discussion in its entirely, something she felt was not productive.

Argeropoulos said that he too had heard voices of concern from the community and disagreed with O’Connell in that it would not be an easy vote for him, stating his concerns over implementation related to differentiated learning. However, he said that many of his fears had been alleviated on Tuesday, and that significant progress had been made by the district in recent months, particularly in math classes mentioned by Dion.

After Argeropoulos moved to recommend the catalog, Tassey requested a roll call vote.

The recommendation now goes before the full board on Monday.