MANCHESTER, NH – Sledgehammers and hard hats were mere props, but they served a mighty purpose during Monday’s “groundbreaking” ceremony at the old Rex Theatre on Amherst Street:

Pounding home the message of patience and progress.

Taking center stage were Mayor Joyce Craig, several aldermen and representatives from the Palace Theatre and Manchester Development Corporation (MDC), the supporting cast in bringing to life what has long been a big dream pinned to the city’s proverbial vision board — turning a blighted building into economic development gold.

After it was a movie theater, the property changed hands several times and ultimately became a nuisance night spot before it went dark. When the MDC purchased the property in July of 2015 they had a specific use in mind: That it be renovated and operated  as a venue for live music, theatre, movies, community and private events “or any other use that would improve the area.”

Mayor Craig took the first swing with a big sledgehammer, making a small dent in an incidental wall inside the drafty, dusty shell of Rex. But the $1.7 million undertaking by the Palace Theatre Trust signals a shift in thinking about city projects, and how collaboration is key to Manchester’s future.

Greater Manchester Chamber of Commerce CEO Mike Skelton said the Palace is the right entity for the job.

“Patience paid off and they city found the right partner in the Palace. By sitting on the property and being patient — if you have the right vision, attitude and resources to wait — a private-public partnership like this is not just a game-changer, but can set an example we can follow for the foreseeable future,” Skelton said.

Changemaking happens — even in municipal government — when everyone is allowed to think outside the box. In this case, the old theater has been a symbol of what stands between a city in need of economic development and the way forward.

Skelton said with an office just around the corner, he’s walked past the old theater “thousands of times” in his 10 years with the Chamber, and always wondered what would become of it. 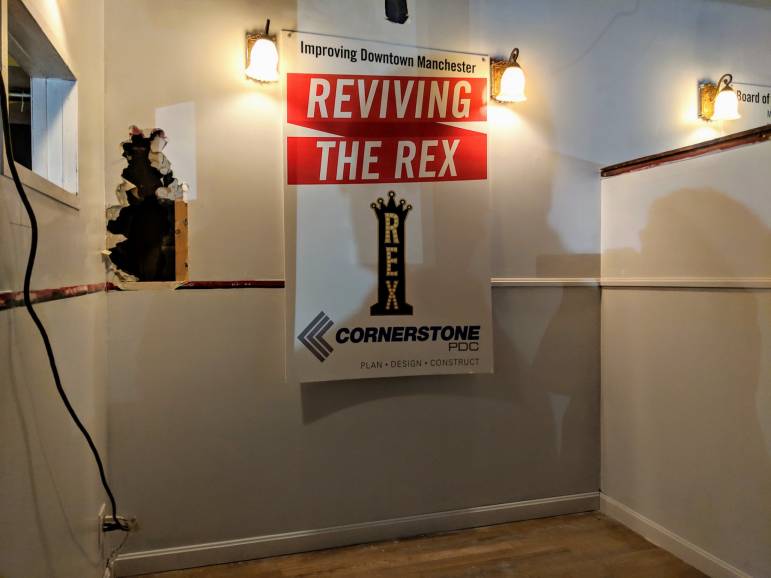 “Every time I walk by I just look at it and see potential. For years and years and years it just felt like it was always going to be that, just a box of unrealized potential,” Skelton said.

“This is one of the most exciting things I can remember happening in Manchester in recent years because it really captures the essence of where I think the city is going — marrying-up innovation and creativity with arts and culture, and bringing more people downtown, especially young professionals,” said Skelton.

Michael Perrella, who serves as treasurer for the Palace Theatre Board of Trustees, called the kick-off to construction “a very important event for the city,” one that will  improve and further the quality of life in the city.

“This doesn’t happen by accident. It doesn’t happen without a lot of leadership,” Perrella said of the quest to breathe new life into the old theater.

Before smashing the wall, Mayor Craig thanked the aldermen as a board for their unanimous support of the project. 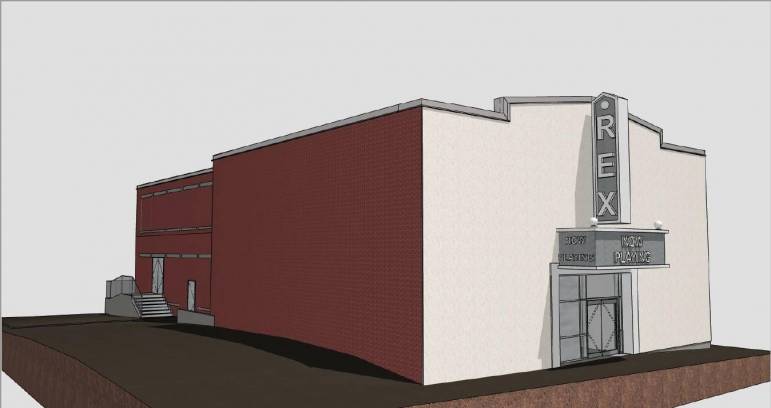 “The city is so excited by this opportunity, and I have to recognize the aldermen, who supported this effort 100 percent. This public-private partnership is unique in the city and it’s one where we are going to be able to renovate this wonderful building and bring people downtown and entertainment downtown and have it be a place where people want to be,” Craig said. “It wouldn’t have happened without the Palace, and I can’t thank them enough —and I’m really looking forward to smashing this wall.”

Ward 3 Alderman Tim Baines also took a swing at the wall, but not before he hailed the collaborative effort, giving kudos to the Palace for its positive influence on a thriving downtown.

“The economic impact of having the Palace and their success over the years has done wonders for the downtown community — restaurants and  shops allows them to thrive, and this is another huge step toward a greater Manchester,” Baines said. “It’s going to bring entertainment  for people young and old, and bring people into our wonderful downtown.”

Will Craig, who serves as MDC board chair, also thanked Palace CEO Peter Ramsay and others who were pivotal to the process.

“I want to give sincere thanks to the mayor for allowing us to think big on this, and think differently on this, and do something the city’s never done before,” Will Craig said. “Also we have enormous gratitude to Peter because this absolutely wouldn’t be happening without his commitment and dedication to the city.”

Bill Stelling said a few words on behalf of the NH State Council on the Arts, a statewide organization focused on making the arts accessible while preserving the state’s rich heritage in the arts.

“This is a wonderful opportunity for the city of Manchester,” Stelling said.  And not only for the city but the entire state, when it comes to the arts — which bring so much into the economy of New Hampshire, something to the tune of 700 million dollars.”

Ramsay said construction would begin right after the groundbreaking ceremony, with fast-track goal of opening the doors in October.

“We have a lot of challenges ahead,” Ramsay said, looking up — way up — toward at the ceiling, currently a nightmarish collection of twisted wiring and broken boards.

A crowd of 75 people or so attended the groundbreaking, many of them swapping stories about the movies they recalled seeing at the Rex, or other memories that came back to them as they poked around the place.

Skelton leaned on the dusty bar as he talked about how he sees this project as a signpost on the path to Manchester’s future.

“This has the potential of being a game-changing type of project for our city at a time when it can have the greatest impact,” Skelton said. “It’s going to be a home run.”