MANCHESTER, NH – Volunteers and West Side residents are working on growing community and fresh produce this summer at the Parkside Community Garden. Led by the University of New Hampshire Cooperative Extension and located next to Parkside Middle School, the garden is a community space where locals can grow food, socialize, and enjoy nature.

The garden was first approved by the City in 2018, but its importance to the community is especially evident now because many people started gardening for the first time last summer during the beginning of the COVID-19 pandemic. In fact, this is how one of the garden’s co-coordinators, Nick Pigeon, first became involved.

“I started gardening during COVID last year, during lockdowns and everything. … I only have about a quarter of an acre at my house, so I only have a small garden at home, I was looking to do a bigger garden, so I found this online, and I showed up and they needed some more help,” Pigeon said.

Last year, because of the pandemic, none of the community garden plots were sold to community members. Instead, volunteers grew lots of tomato plants and donated the produce to businesses on Elm Street, according to Pigeon.

This year, anyone who was inspired to garden by the pandemic, longtime gardeners, or anyone simply in need of a plot of land to plant in, is able to buy a plot at the community garden. Technically, the garden’s planting deadline was June 20, but Pigeon said if someone still wants a plot to plant fall crops, they would be able to. Currently, some of the plots not taken by community members are being used how they were last year: growing crops to donate.

Last year’s garden was dominated by tomatoes, but this year there are a variety of crops being grown by community members and volunteers.

“I think we have a little bit of everything,” Pigeon said. “We have herb gardens, broccoli, people are growing flowers, tomatoes. I myself have a few beds. I have one that’s solely tomatoes, and then I have cucumbers, summer squash, blue hubbard squash, pumpkins. People are growing cabbage – really, everything.”

There are also plum trees and blueberry bushes that everyone shares the duties of caring for.

“The West Side in particular really struggles with community building,” Pigeon said. “So … we have a nice little garden community over there and you know you could be over there working in your garden. Somebody might walk up to the fence and say, ‘Hey, what are you guys doing here?’”

Students on the West Side also get to work in the garden to learn how to grow their own food. Pigeon said there are also plans to make the garden more of a community social space by adding a gazebo and cornhole boards. 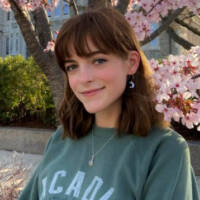 Rachel Phelan is a lifelong Manchester resident and a student at Boston College.