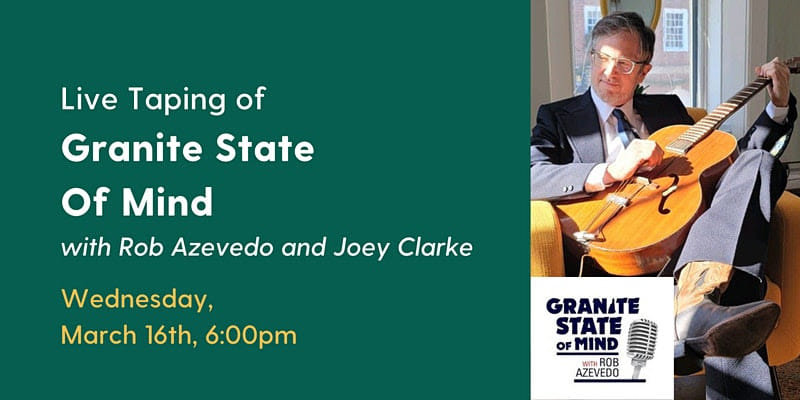 Have you ever wondered what it looks like when a musician comes into the studio at WMNH to perform on Granite State of Mind?  Of course you haven’t, because you have a life.

But it’s actually a ton of fun and not much heavy lifting.  Once a week for one measly hour I host musicians from NH and beyond on 95.3FM on Fridays at 6 p.m.  Been at it nearly, if not, 10 years now.  I love it. Can’t get enough of it.  Spoiled, I say, being sung to by truly amazing people and artists of all ages who want to play and promote and chat about music or life or both. Never over the course of all those years has a show been lame. Maybe once, but that’s only because some dude was a dick, the only one ever.  And of course, some shows are stronger than others, much of which depends on whether I slept in my van on a Thursday night or not.  But the music, to me, has always been stupendous.  Just mind-bending to witness just feet away for a music junkie like myself.

The musicians always give it everything they got.  And the words they write, the ones they pine over and edit and shave down or up, how those words roll out their mouths, how they match up with the chords, how their fingers fly and control the tempo and steam.  Ah, it’s awesome, they are awesome, all of them out there from the Lakes and in the city, to the hills off Route 89 and the salty streets of the seacoast.  Talent is everywhere in this state.  Literally.  Everywhere.

That said, GSM and The Bookery on Elm Street, a treasure to the Queen City, no doubt one of its finest births, are teaming up to record live shows once a month right inside the doors of the bookstore.  I’ve listened to writers read their works at The Bookery, musicians play as well, and between the coffee and wine and shelves of books and the cool aesthetics of the entire store, it’s a perfect place to have people sit in the audience, nurse a drink and watch it all play out before your eyes.  And it’s FREE.

I will lisp my way through an always unscripted interview, figuring out what I want to know more about after the artist gives their last answer.

They will perform anywhere from five to six songs in the hour-long format we concocted for this venture.  The audience will freely ask questions, if they wish.  And the musicians will drop a bomb of brillance on you in hopes that you might go see them at a show, or buy their music on Spotify or download just a song or two.  Whatever it takes for us to understand that they are right under our noses.  Who knows, maybe our first guest, Joey Clark, will even let you smell him.

Speaking of Joey, Joey Clark and his band The Big Hearts, will truck in a dobro, stand up bass, harmonica and acoustic guitars and lay it down for our first hour at the Bookery.  These guys are new to me, maybe having met Joey four months ago in-studio above Margaritas.  But let me tell you, Joey Clark from Weare and his band crush it.  I mean really nail it.  Professional, clean, a really talented wordsmith too, evoking country and folk with a drizzle of Irish timber in there, Clark has been a terrific discovery to GSM and we just know how much you will love to watch it all hang out.

So, please, come on down to The Bookery this Wednesday night at 6 p.m. and share in the music first hand, right beside me.  If I start babbling too much, hell, just take the mic away from me and you do it.  I don’t care.  They serve beer.

Hope to see you there.  Thank you.