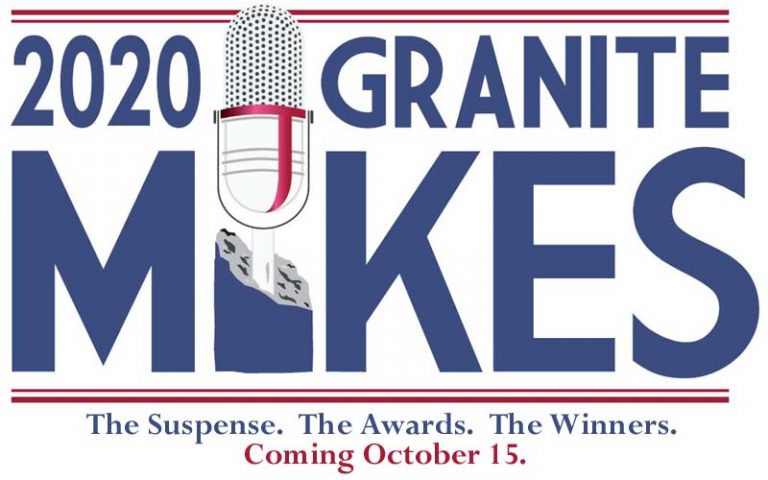 MANCHESTER, NH – 2020 will forever be remembered for COVID-19, but in the broadcast industry, it will also be remembered for the unique perseverance shown by radio and tv stations to ensure that live and local broadcasts didn’t go dark even though many studios had to be vacated for public health and safety.  This year, New Hampshire broadcasters overcame obstacles to continue to provide award-winning coverage of the year that was… from a tragic Pelham church shooting to uniquely informative and entertaining NH Primary coverage, as well as several creative and memorable commercials in both radio and television.  These are just some of the recipients of the 2020 NH Broadcasters Association Granite Mike Awards.

In a virtual awards video presentation, NHAB leadership honored the member stations for their hard work.

“Our industry has suffered deep losses; we faced setbacks and had to throw out our daily rulebooks and draft a new and completely different blueprint for our day to day routines,” explains Tracy Caruso, Executive Director of New Hampshire Association of Broadcasters.  “We have cut, simplified, distanced and even turned bedrooms, dining rooms, spare rooms into broadcast studios, production centers and sales headquarters.  Despite the sometimes-existential challenges… we continue to provide content, news, entertainment, information, comfort, reassurance, even laughter and distraction at a time when Granite Staters need us the most.”

It was a year of outstanding performances in the most challenging conditions.

Mark Healey, radio host for WINQ in Winchester, and WMUR TV’s Erin Fehlau received the radio and television Air Personality awards.  WVMJ’s Gino and the Magic Morning Show won First Place in the Morning Show Team category. Individuals and stations submitted 180 entries in 17 categories.  The work was judged by the Wyoming Broadcasters Association.  WMUR TV and WZID-FM were named the television and radio Stations of the Year respectively.

NHAB presented the 2020 Broadcaster of the Year award to every media outlet, for working above and beyond the challenges of the pandemic, which forced so many stations to rethink how to provide on-air content safely and without interruption.  Many stations outfitted their employee’s homes with necessary equipment to ensure the show went on no matter what.

Best Use of Digital Media

FIRST – WMUR-TV- WMUR On Every Screen


Public Service Campaign of the Year

Station of the Year

About the New Hampshire Association of Broadcasters:

Established in 1954, the New Hampshire Association of Broadcasters is the only voluntary, statewide trade organization serving the Granite State’s over-the-air radio and television stations.  It assists members with general and broadcast-specific business challenges through educational seminars, legal hotlines, lobbying (in-state and on Capitol Hill), and additional opportunities to receive industry specific assistance, locate helpful resources, and network with fellow broadcasters.