MANCHESTER, NH – Having Wildly Important Goals is just a jumping off place for kids at Gossler Park Elementary. As part of the Leader In Me program, students are learning to take charge of their educational goals, wild or otherwise, and develop life-long habits to guide them to success, no matter where the future takes them.

For example, a kindergartener named Reuben had a dream, of counting from 1 to 30. Once that goal was under his belt, he set a new one: counting to 50. His success strategy is straightforward –  he counts everything from his food to his toys, and he practices writing his numbers every day. He expects to reach his new goal by the end of April.

And Lindsay, a fifth-grader, is thinking a lot about middle school. It’s her next big social and educational hurdle. She says she knows the road ahead will be tough, but she feels ready because of the 7 Habits of Happy Kids that are part of Gossler Park’s Leader in Me program, which she’s been mastering since last year.

And then there’s Adam, a second-grader, who took to the microphone on April 20 during a school-wide assembly to describe how his goals this year mostly involved hitting color-coded behavioral targets. When he saw his chart tracking into the wrong color zone around December, he self-adjusted. After he was finished speaking to a gathering of his peers, parents and city dignitaries, his mom, Suzanne, stood from the back of the gymnasium to affirm that the program has made a true difference in her son’s overall behavior.

“He’s become a peacemaker,” said Suzanne, her voice wavering a bit as she added, “I’m really thankful for the program.”

Principal Lori Upham also heard the quiver in Suzanne’s voice, and wasn’t surprised by the positive emotion many parents express about the tangible short- and long-term outcomes of the program.

She sees it, too.

As wildly important goals – or WIGS – go, the school has one, as well. Upham says they’re shooting for 85 percent of students in grades 1-5 to make at least one-year’s progress in reading and math by June 2017. Students were tested in September and again in January and, so far, 55 percent have made a year’s growth in reading in math.

The program is the result of a collaboration between the city’s Health Department and partners, like Granite United Way, and is one of the initiatives that earned the city a Robert Wood Johnson Foundation Culture of Health Prize in 2016. With seed money from the RWJ Foundation, and matching funds from Granite United Way, the New Hampshire Charitable Foundation, the Endowment for Health, and the Cogswell Benevolent Trust, Manchester set up two community schools starting in 2012.

The Manchester Community Schools Project is designed to transform the culture of schools where the student population is considered more “at risk.” Granite United Way has pledged more than $500,000 to support programs at Gossler Park and Beech Street schools and meet the goal of transforming the culture of schools, to one of learning, leadership and academic growth in a community-health based environment.

“Fundamentally, the Community Schools program is about building a system to create opportunities, not just a hand-out but a hand-up – and sometimes a hand-out is completely warranted, but taking time to find out why that crisis occurred, and how to bring community into schools is the solution,” says Jaime Hoebeke, who works for the city’s health department as Division Head of its neighborhood health initiative.

“It’s not just a school issue, or about the education of students, but also about how do we support thriving families,” Hoebeke says.

According to research compiled for the 2014 Manchester Neighborhood Health Improvement Strategy report, the city’s fastest growing population of “poor” residents is among children under the age of 18.

More than 32,000 of Manchester’s residents live at some level of poverty. Over half of these residents live within center city neighborhoods or what is also known as the City’s Neighborhood Revitalization Strategy Area (NRSA), a designated area based on socioeconomic indicators. 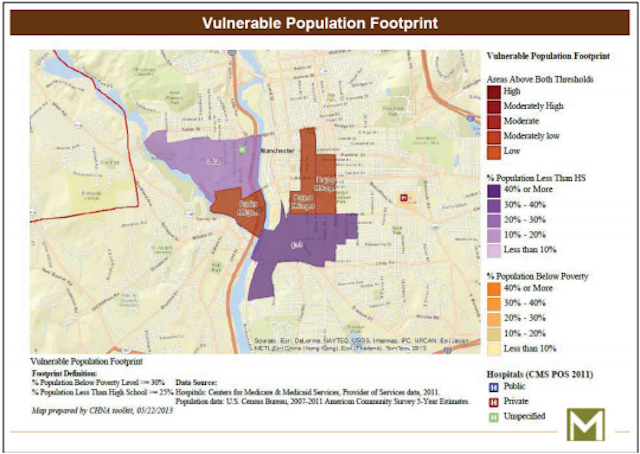 The city’s Neighborhood Health Improvement Strategy provided the roadmap for the city and philanthropies like the United Way to focus in on Manchester’s most impoverished areas. Through a series of meetings, surveys, and door-knocking to gather information, the city learned that residents had a vision of an ideal city that provided supports for parents, initiatives that address crime and substance use, offer free fitness programs, and affordable public transportation, among other resources.

In response, Granite United Way adjusted its grant-making strategies to align with the goals of the Neighborhood Health Improvement Strategy. That meant funding fewer statewide programs and focusing on collaborative, multi-year strategies. One of these was the Manchester Community Schools Project, wherein schools serve as neighborhood hubs providing a wide range of social services and education support to children and families.

In particular, the heroin epidemic has been identified as a contributing factor to the increasing need within city schools. Hoebeke says despite the challenges, it’s an exciting time to be involved in Manchester’s public health projects.

“When you consider where we were and where we are today, there are so many partners coming to the table to work together in a multi-disciplinary way, like health and education, and there’s no end in sight to that right now,” Hoebeke says. “Everyone is willing to come to the table for the greater good – it’s part of why we won prize the RWJ Foundation Culture of Health prize. It took an outside entity to recognize that what’s happening here is remarkable; it doesn’t happen in other communities.”

Hoebeke explained that as an urban outpost with a population of about 110,000, Manchester is small enough that “you can get your arms around the need,” and everyone knows one another, unlike some larger cities with similar struggles.

The city’s health department has been working since 2012 with Beech Street and Gossler Park as “foundational” community schools, and has developed additional outreaches at Wilson, Bakersville and Parker Varney, based on the continued initiative to bring community health resources inside the schools.

Upham says the result of all of this, so far, has made a tangible difference. And not only for students and parents, but for teachers who were overwhelmed by the number of students coming into the school exhibiting signs of what’s known as toxic stress and Adverse Childhood Experiences (ACES), identified by the Centers for Disease Control as follows:

In her 23 years as an educator, Upham has personally observed a dramatic shift in terms of the kinds of needs students enter the school system with – a majority of students exhibiting behavioral problems are coming from a place of trauma, resulting in a range of issues from the inability to sit still, to being able to access the curriculum.

Mayor Ted Gatsas said Thursday that after attending several Leader In Me presentations at city schools over the past few years, it’s clear to him that students are truly gaining habits to last them a lifetime. He said he was also impressed with hearing from students about setting – and attaining – their academic goals, especially kindergarteners.

Upham said the journey has included allowing students to take the lead in some aspects of decision making – like choosing the slogan for their program, “Make the World More Awesome,” a line borrowed from Internet sensation Kid President.

And there are still gaps to fill – Upham’s wish list includes the ability to bring in more certified teachers to assist in classrooms, and a reduction in the minimum class size standard of 30 students.

“We also need more preschool resources – we have students who come into kindergarten unable to count, or recite the alphabet, or even spell their first names,” says Upham.

She prefers to focus on the positives, which above and beyond enriching the lives of her students, includes offering free High School Equivalency Test (HiSET) exams, as part of Gossler’s Community School designation. More than a dozen parents – and even a grandparent – have completed the exams in the past year.

The Leader in Me program is currently in place at Wilson Street School (the first to implement it, and now finishing its third year); Gossler Park; Jewett; Hallsville; and McDonough. All the programs except for Gossler Park’s are funded through Title I. Mayor Gatsas remarked following the assembly that is would be great to have Leader In Me in all city schools.

Funding, like most every other initiative, is the hurdle. However, advocates, including Upham, could argue that the long-term rewards have the potential to more than balance out the short-term costs.

“The Leader in me is not a program, it’s a process,” says Upham. “It’s not another feel-good initiative. The seven habits are a foundation for what we want for all our students, skills they can bring home and use when they’re not here at school,” says Upham. “Our biggest push for our staff is to meet students where they are when they get here – which is all over the place. And then the challenge for teachers, with a little help from the health department resources we now have, is trying to piece their world back together again.”

The 7 Habits of Happy Kids

From consulting service FranklinCovey, based on the book, “7 Habits of Highly Successful People,” by Steven Covey.