It was a quiet, sentimental tribute to Lauren’s dad, longtime Derryfield golf pro Mike Ryan, who died in November after more than 20 years as the man on “the moon,” as those who know it and love it affectionately call the municipal golf course along Mammoth Road.

Why do they call it the moon? Maybe it’s for the tiny golf ball-sized craters that pucker the turf, or maybe it’s for the way the moon rises over the pines and up into the wide-open sky as night falls, rendering the sprawling curves and bunkers of the course a luminescent moonscape.

Either way, Thursday’s moon shots landed just right for those who were there to witness the passing of the torch – or in this case, clubs.

Course supervisor Jeff Rader had a surprise prepared for the Ryan family — a special encased marker was placed at the first tee with Ryan’s name burned in wood on one side and “Derryfield” on the other.

“See you have the tree and moon there, along with his favorite color, purple,” says Rader, noting the finishing touches on the acrylic box that sits angled, like a diamond, between two tees. “It will be here for the season.” 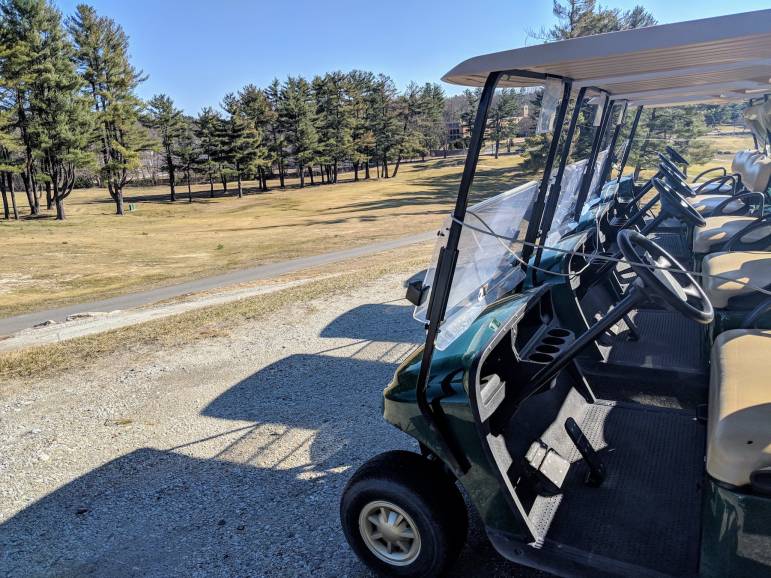 Most years, opening day at the Derryfield happens by mid-April, depending on when the last big snow falls across the city. This year, the ground thawed early, says Rader, and the greens — still dormant but ready for photosynthesis — have been rolled and prepped to the best of Rader’s abilities.

Golf carts, cleaned and stacked and tethered in rows outside the pro shop, were still wet with morning dew as they cast shadows across the pavement, and onto the nearly-greens, below.

For more than two decades this was Mike Ryan’s turf. His good humor and great sportsmanship set the tone, creating a foundation of camaraderie that has been perfectly prepped for Mansfield to build on.

As a small group gathered in the pro shop Thursday morning, Mansfield appeared excited about a new beginning and the season ahead. He hugged Bonnie Ryan when she arrived, and the two shared a laugh before moving out for tee time.

Rader discretely carried a small brown box with him. It held three more keepsake tee markers he had made up for Ryan’s wife, Bonnie, and two daughters, Lauren and Kristen.

Just a little something that doesn’t come close to enough, for all that Mike Ryan did for the Derryfield.

“Thank you so much,” Bonnie Ryan said, turning the marker over in her hands giving her words  just enough time to catch up with her emotions. “He loved the moon.”