As the month of July comes to an end, it’s now been just over a week since the end of the filing period for this fall’s Manchester municipal election. Here’s a roundup of news and notes from the campaign trail over the past week. 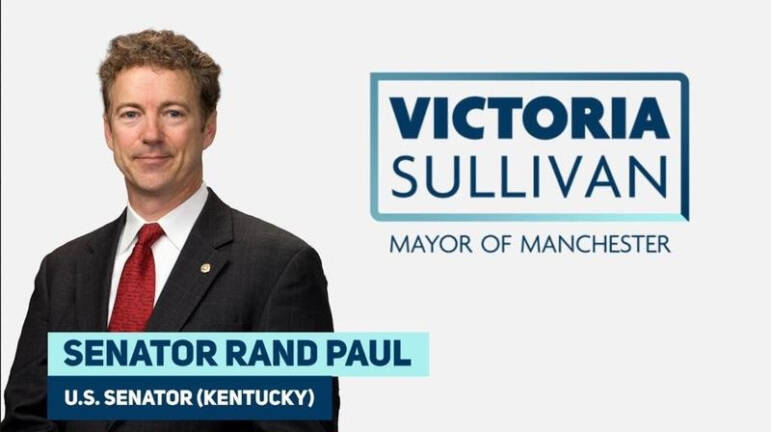 On Thursday, Mayoral candidate Victoria Sullivan announced that she has received the endorsement of U.S. Senator Rand Paul (R-Ky.)

“I’ve known Victoria for many years and I can assure you, she’s a tough, principled conservative with a track record to back it up. Victoria is a fighter that will have the courage to stand up for individual liberty and to tackle the tough issues facing Manchester,” said Paul.

Girard also made an endorsement of his own, urging his supporters to back Ed Sapienza to replace former Ward 8 Alderman Mike Porter in September’s Special Election to fill the remainder of Porter’s term, which ends in January.

“I’m grateful for the grassroots support our campaign has received from so many individuals in our community,” said Craig. “These fundraising numbers are another example of the energy and excitement about the progress that we’ve made in the Queen City.”

“At the same time Mayor Craig was breaking her second quarter fundraising record, she was passing positive legislation to help Manchester,” said Jeff Taylor, Campaign Manager. “From investing a record amount of funds into affordable housing to having a bipartisan group of Aldermen pass her American Rescue Plan recommendations, millions of federal funds will be used to address the health and safety of our neighborhoods, support small businesses and more.”

Lisa Freeman dropping out of the race

Former Board of School Committee (BOSC) Member Lisa Freeman announced earlier this week that she is abandoning the campaign to retake her seat in Ward 5 against incumbent Jeremy Dobson.

Freeman told Manchester Ink Link that a decision to move to Goffstown later this fall made a run untenable, stating that it was not an easy decision, but one that she needed to make citing what she saw as the deteriorating state of the city, Manchester’s increasing divisiveness and a feeling that she would be unable to give her all to campaigning this fall.

Dobson will now run unopposed in Ward 5, with BOSC incumbents Julie Turner, Peter Perich and BOSC challenger Ken Tassey Jr., also running unopposed in Wards 1, 8 and 6, respectively. Ward 6 incumbent Dan Bergeron missed the deadline to file for re-election by minutes last week. Attempts by Manchester Ink Link to reach Bergeron to ascertain whether he will run a write-in campaign have as of yet been unsuccessful.