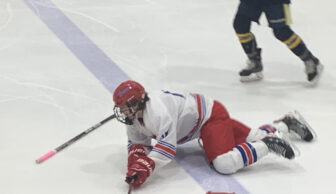 MANCHESTER, NH — Bouncing back from its worst loss of the season, Trinity High got a pair of goals from Cooper Gaudio and solid goaltending from Brendan Heppler to slip past Bow, 3-2, Saturday night at JFK Coliseum.

The Pioneers scored all three of their goals in the second period, erasing a 1-0 deficit. Trinity then held off a furious Bow rally in the third period, including killing off a 1:42 5-on-3 power play.

Trinity has now won three of its last four games to even its record at 4-4-0 and is playing some of its best hockey of the season. But the Pioneers were coming off a humbling 8-2 loss to unbeaten and No. 1 ranked Concord.

“I didn’t think we played very well defensively in the loss to Concord. They’re a great team, obviously, but I think we made some things easier for them than it should have been,” said Trinity Coach Mike Connell. “I thought we played much better defensively, tonight. There’s still things we need to be doing better but I thought we were better tonight.” 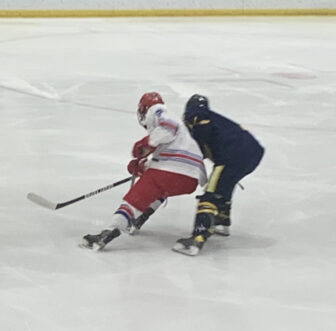 Bow grabbed a 1-0 lead in the final minute of the first period on a goal by Julian Lerch. But that seemed to light a fire under Trinity, which came out and dominated the second period.

The Pioneers tied the game, 5:15 into the second, on a goal by Sam Maurice. Senior defenseman Aiden Hurley, just back from time on the injured list, took a bouncing, fluttering shot from the point which was blocked in front of the net and bounced about six feet in the air. Maurice was able to get a stick on the bouncing puck and flipped it just under the crossbar.

Five minutes later, a picture-perfect passing sequence involving Aiden Palmeter, Maurice and Gaudio put Trinity on top for good. Palmeter put the play in motion, then Maurice laid a perfect drop pass to a trailing Gaudio, who used his teammates for interference and snapped a shot past Bow goalie Mason Marquis for a 2-1 lead.

Trinity preserved its lead by killing off a penalty late in the period. Just as the penalty expired, Heppler made a nice stop on Bow’s Dominik Jurcins, The rebound bounced to Conor Hurley, who spotted Gaudio lurking in the neutral zone and led him with a pass into the attack zone. Gaudio outraced Marquis for the puck, then slipped into the vacated net, giving the Pioneers a 3-1 lead.

While Trinity came out flat to open the third period, Bow came out with a sense or urgency, generating multiple quality scoring opportunities. None was better than a 5-on-3 power play with just over four minutes remaining in regulation. Bow was able to move the puck well but was continually foiled by the play off Heppler between the pipes. In one stretch, Heppler lost his stick but was still able to make a pair of saves and covered the puck up to force a face-off.

“(Heppler) played really well for us tonight, he made some big saves,” said Connell. “But we’ve been lucky, all our goaltenders have played great for us this year.”

Bow was able to cut the Trinity lead to 3-2 on a goal by Brodie O’Neill with 1:45 left in regulation. But that was as close as the Falcons could get.

“This is a big week for us. We’ll find out what type of team we are,” said Connell. 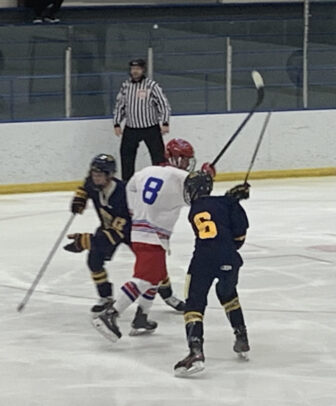